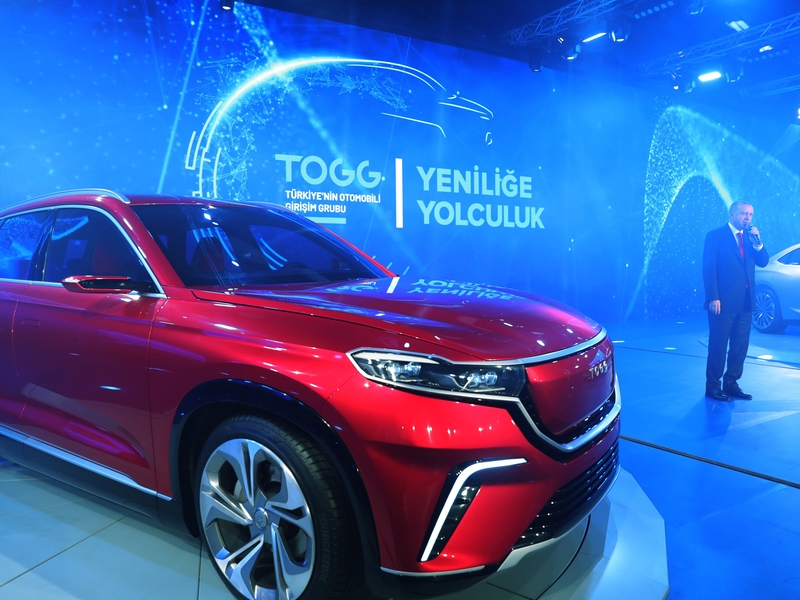 Turkey unveiled prototypes for its domestic electric car project on Friday, as the government announced sweeping incentives to back President Recep Tayyip Erdogan’s ambition to create a Turkish-made vehicle.

Turkey’s Automobile Joint Venture Group, or TOGG, which comprises five companies and a business umbrella organization, will establish a factory in the manufacturing hub of Bursa, according to a published presidential decree.

The 22 billion lira ($3.7 billion) investment will enable the production of five models and a total output of 175,000 EVs a year.

The first, a compact SUV, will be introduced in 2022, according to TOGG’s website. The group has been dropping hints about what it will look like on its Twitter page for days.

The car was designed by Italy’s Pininfarina, the Dunya newspaper reported on Dec. 11.

The project is expected to contribute $50 billion to the Turkish economy in the 15 years following 2022, according to TOGG CEO Mehmet Gurcan Karakas, a former Bosch executive.

TOGG’s COO is Sergio Rocha, who is the former CEO General Motors Korea.

TOGG will benefit from comprehensive tax cuts, free land allocation, interest rate reductions and a government purchase guarantee of 30,000 vehicles until the end of 2035, according to the decree.

Investors are obliged to provide at least 3.5 billion lira in cash as capital by the end of 2023.

Erdogan first urged Turkish companies to join forces to manufacture a domestic vehicle nine years ago, saying in January 2011 that he was “looking for a brave fellow, an investor for a domestic car.”

Erdogan, who first revealed plans in November 2017 to launch a car made entirely in Turkey by 2021, said the car represents the culmination of Turkey’s progress in industrial technology, adding that Turkey aimed not only to sell the car domestically but also wanted TOGG to become a global brand.

“We’re all together witnessing Turkey’s 60-year-old dream become reality,” he said, referring to failed plans in the past to build a fully home-produced car. “When we see this car on roads around the whole world, we will have reached our goal.”

Following his speech, a red SUV and a gray sedan were raised onto the stage, sporting the TOGG label.

Erdogan said the charging infrastructure for EVs would be ready nationwide by 2022.

Turkey already is a big exporter to Europe of cars made domestically by automakers such as Ford, Fiat Chrysler Automobiles, Renault, Toyota and Hyundai.

In October, Volkswagen said it had postponed a final decision on whether to build a car plant in Turkey amid international criticism of an October Turkish military operation in Syria.

Reuters and Bloomberg contributed to this report