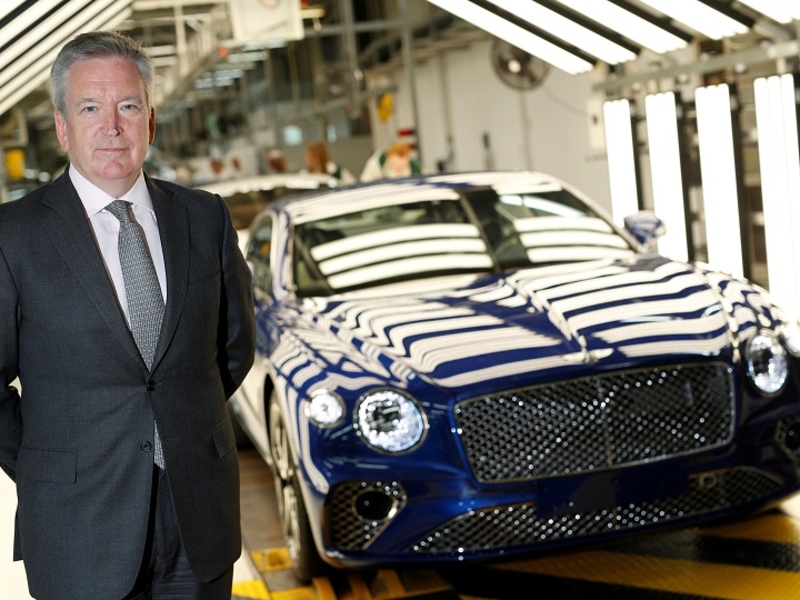 Adrian Hallmark has had a tough time since returning to Bentley as CEO in February 2018 after 13 years away from the UK luxury brand, seven of which were spent at Jaguar Land Rover. Lengthy delays launching three key models — the Continental GT coupe and convertible, and Flying Spur sedan — pushed the brand to a rare loss last year as dealers were deprived of cars to sell. Bentley returned to profit in the first six months, leaving Hallmark confident about a strong 2019 and an even better 2020. This will provide him with momentum as he starts to prepare the brand’s longtime base in Crewe, England, to add production of Bentley’s first electric car. Hallmark spoke with Automotive News Europe Correspondent Nick Gibbs.

Last year Bentley posted a full-year financial loss but you were profitable in the first half of this year. What contributed to that?

Last year was a perfect storm. A huge effort had gone into creating replacements for three fantastic nameplates [the Continental GT coupe and convertible and Flying Spur sedan] and it took us 18 months longer than we planned to launch them. We have just started selling the Continental GT in America — one year after it was released in Europe. And it’s still not in China, which means we have existed this year with 40 percent of our world markets lacking our core models. The Continental GT is due in China in the first week of December. So, are we going to be profitable for the full year? Yes, as long as China is back this year. If so, we will have a good year, but we are not going for a record.

Next year, it would be hard not to have a record year.

Your six-month report mentioned cost reductions. What has been cut?

We have reduced people and non-people-related costs significantly compared with the forecast for this year. We have reduced running costs by a quarter.

So you have had layoffs?

We released 450 people in total. About 380 of those were full-time employees. The rest were temporary employees. And all of those 380 were as a result of a voluntary early-retirement offer. We improved the takt time [time spent on each station] from more than 12 minutes to 9 minutes on all of the assembly lines and in the paint and trim areas. If you go back through automotive case studies, I would expect that reduction is as big or probably bigger than what any factory has done in a 12-month period.

Do you need Brexit to be finalized before you expand Bentley’s manufacturing footprint in Crewe?

Yes and no. There are two levels of expansion that we need as a company. One is to upgrade and professionalize what we do today, and the other is to prepare for new products and new technologies. It’s important to separate the two because we don’t want to be doing basic infrastructure upgrades when the clock is ticking to build a new car or a new assembly hall for the car.

What needs to be done to prepare for new products?

It’s all about electrification. You asked whether Brexit uncertainty held back our investment. It’s actually not been about Brexit. It’s been about getting the company straight, getting it profitable and having a clear view of when the right time would be to bring the first full-electric cars to market. We have said 2025 is the earliest we can get a credible battery-electric Bentley [on the road]. Therefore, the next phase of our investment would be linked to that electrification. We are still working on whether we produce the cars on the same line or have supplementary build areas that bring in subcomponents in a different way.

Does Bentley’s battery-electric car need to be a stand-alone model?

Which segment do you want to go into first?

Are there any segments where we are not yet fully active in price or body style or are there subsegments where we would want to enter? We could take one of the existing nameplates and that could be the first electric car, but we wouldn’t take an existing car and try and fit batteries into it because there’s a compromise from a range and efficiency point of view.

Are you planning to use the PPE luxury EV architecture from your parent, Volkswagen Group?

The ambition is that we would go onto a new group architecture. Therefore, we are currently working to define all the parameters that we would need. PPE is a group approach and different brands are leading different parts of it.

What part is Bentley leading?

You have spoken about cars becoming bigger and smaller. Would a future battery-driven Bentley be smaller?

Smaller is a relative thing because we are not going to build a Mini. It would be space optimized. Take the Jaguar I-Pace. The interior volume is the same as the Range Rover, but it’s about 35cm shorter. We would always build it so that the interior is Bentley-sized and to Bentley’s standards. You don’t need as much overhang, but that also doesn’t mean we want to build a small car. We just don’t want to waste space on the outside either. We see the battery-electric vehicle architecture as being a liberator of that potential.

Does an EV platform inevitably mean it’s going to be a crossover?

I think electric cars will be slightly higher because of where the batteries are now. However, with new battery technologies, it will be possible to make cars that are lower as well as cars that are taller because the increased power density will overcome the aero resistance.

Does that mean you will be moving to solid state batteries?

I’m not saying that we are guaranteed to go solid state, but that is already on the radar within that mid-2020s period. They are about 30 percent lighter for the same power as lithium-ion. An I-pace has 720kg of batteries so going to 500kg instead of 720kg makes a difference. Also, think about how that changes the packaging.