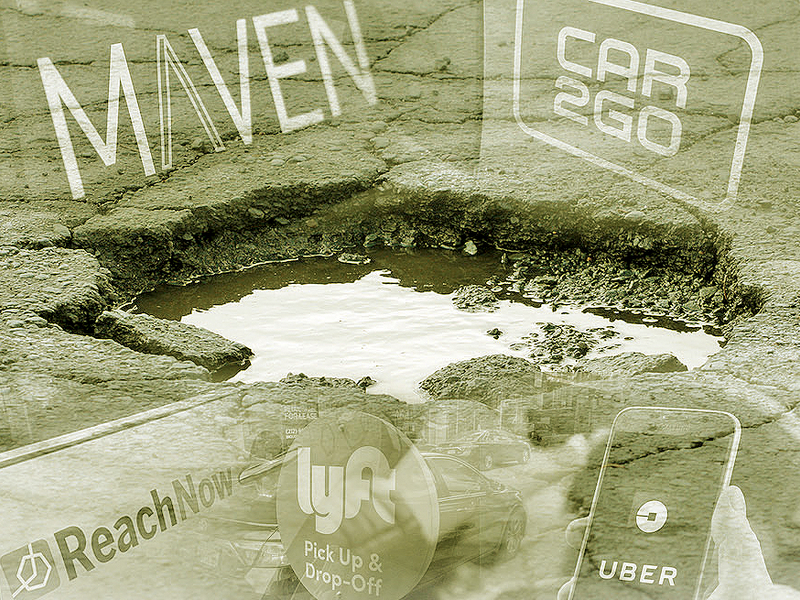 Hundreds of miles into an epic hike across the French Pyrenees and into northern Spain, Steve Banfield knew the time when he could unburden himself would arrive in a matter of days.

Banfield carried a stone from his Seattle-area home with him on the Camino de Santiago trail this spring, and he intended to leave it atop the Cruz de Ferro, a mountain upon which travelers leave stones as a symbolic act of relieving a weight from their shoulders.

“For a while, I didn’t know what that stone would be for me,” said Banfield, who had left his job as CEO of BMW’s ReachNow short-term rental brand months earlier after three years. “I didn’t know until about three or four days ahead of time, and I realized for me, it was ReachNow. It was my baby, and it was time for me to put it down.”

He wasn’t the only one making peace with a big bet on mobility this year.

Across the auto industry, automakers retreated from future-minded mobility projects in 2019, trimming unprofitable divisions amid an uncertain global economy and the more pressing need for investments in electrification and autonomy.

With the transportation upheaval that many predicted proving slow in arriving, many automakers simply decided the future must wait.

“It was kind of, I don’t want to say whack-a-mole, but it was like, you know, ‘I’ve got to cover it all,’ ” said Michelle Anderson, managing director and senior partner in the Detroit office of global consulting company BCG. “In reality, it’s more of a stepping back to say, ‘I cannot afford to cover this landscape.’ ”

On Jan. 10, Ford Motor Co. said it intended to shutter its Chariot shuttle service amid tepid demand for rides. Only three years earlier, the automaker had acquired Chariot for a reported $65 million and made the San Francisco startup a centerpiece of its mobility strategy.

By the end of the year, Ford had further shed its mobility bets, placing GoRide on hiatus as it folds the medical shuttle service into its automated vehicle plans. Separately, it sold its Canvas subscription service to startup Fair, which later faced its own reckoning, laying off 40 percent of its staff in October.

“You’d be hard-pressed to find a model where there aren’t already better options today, even with existing car-rental companies or a Zipcar, whatever it may be,” said Brian Collie, global lead of BCG’s automotive and mobility practice. “The market need, the pain points, just weren’t severe enough, and offerings weren’t better than the other offerings that exist today.”

What they do offer: Short-term rental services give the automakers that run them a direct touch point with consumers and provide operational insights for future autonomous fleets. But automakers have decided they won’t — or can’t — pay for those learnings in the present day.

Their challenge is considering massive investments in self-driving technology, electric powertrains and mobility all at the same time. Banfield likened it to playing three simultaneous hands of no-limit poker at three separate tables with one stack of chips. Losing any particular hand might mean a company no longer will have resources to continue playing the others.

Deciding where to make bets — or how to triage current ones — may largely depend on the current vantage point. Luxury brands competing with Tesla may view electrification with urgency. The likes of Uber, Lyft and Didi Chuxing have no legacy business to protect. Contrary to automakers, their survival depends on continuing to play the hand.

Until automated driving technology arrives in widespread fashion, Collie said, business conditions won’t substantially change for ride-hailing and short-term rentals. So automakers may turn their focus to investments in electrification and autonomous driving first. But that strategy is not risk-free; it allows new entrants such as Uber and Lyft, which have thus far stomached billions in losses, to establish positions as market leaders.

It reminds Banfield of the TV and music industries in the late 1990s and early 2000s, when legacy companies faced fresh challenges as the Internet took root.

“You had a bunch of properties realize that it was really expensive and hard, and they exited, while you had others like Spotify, Netflix and Hulu come along and build from the ground up,” he said. “Spotify and Netflix are the Uber and Lyft of that area, and now they have leadership positions. And we have these old-school companies consolidating.”

With the Fiat Chrysler Automobiles and PSA merger pending, there are echoes of that on the automotive horizon.

But automakers may still have one aspect of their traditional model that presents an opportunity as they consider mobility investments: Dealers are their best connection to current customers and provide a physical presence across the country.

“ReachNow never had a goal or [key performance indicator] on how many cars do we sell in a given city, but we absolutely got anecdotal evidence from dealers telling us how many people would show up and say, ‘I really like the 3 series or the Clubman,’ and a lot of people had never thought they’d like an EV, but they’d come in and say, ‘Talk to me about leasing an i3.’

“So people had these positive experiences, and that’s an opportunity. This isn’t just a way to sell more cars, but to introduce people to the brand. I haven’t seen anybody do that well.”