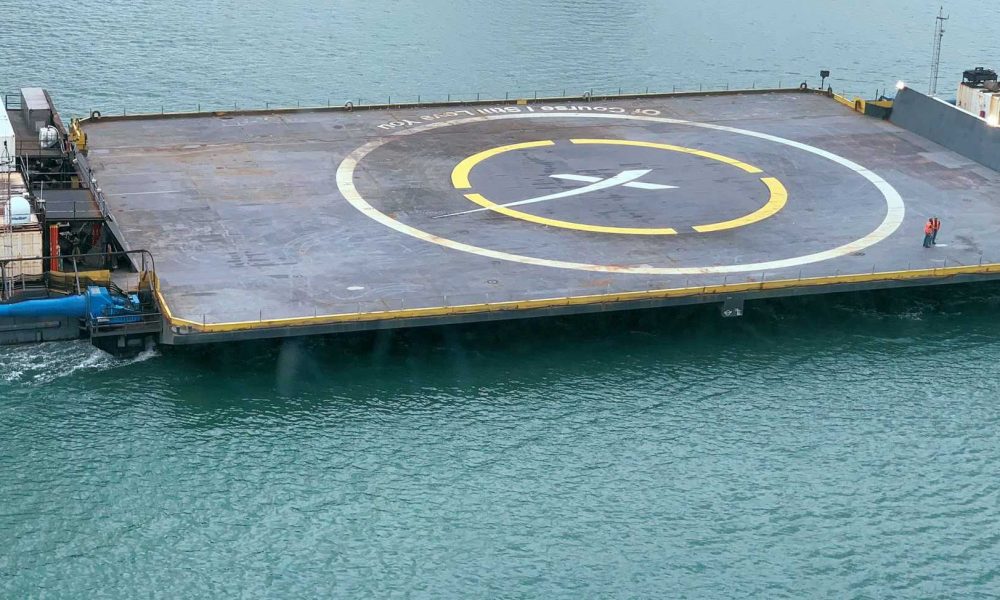 SpaceX’s first Falcon 9 launch of 2020 – and the new decade – is just around the corner after drone ship Of Course I Still Love You (OCISLY) departed Port Canaveral on Monday to prepare for its 27th booster landing attempt.

Known as Starlink-2, SpaceX’s first launch of the new year slipped a handful of days from December 30th to January 3rd and finally January 6th and will be the company’s second launch of 60 upgraded Starlink v1.0 satellites, as well as the third dedicated Starlink launch overall. Just one of potentially dozens of SpaceX launches planned in 2020, the year is setting up to be – by a long shot – the company’s most ambitious year ever.

Meanwhile, Starlink-2 alone is set to ring in at least two significant milestones, pushing the nascent broadband internet constellation a step closer to serving customers and Falcon 9 reusability a step closer to being fully realized.

Simultaneously, SpaceX technicians are in the midst of preparing other recovery fleet assets for what appears to be a partial fairing recovery attempt. Twin fairing catchers Ms. Tree and Ms. Chief debuted on their first simultaneous fairing catch attempt in December 2019 but each unfortunately missed their catches, instead picking up the floating fairing halves off the surface of the Atlantic and returning to port on December 18th.

The fairing halves were thus still successfully recovered and may be able to fly again on a future Starlink mission, but both fairing recovery ships suffered damage during their first simultaneous deployment. Ms. Tree suffered minimal damage in the form of tears to its secondary net – an easy fix – but Ms. Chief was not as lucky and somehow lost one of the two white booms that support each of her four arms.

That wounded arm was visibly hanging lower than its companions when Ms. Chief returned to port and technicians have since removed all of her arms, presumably evaluating whether the ordeal overstressed any components or caused significant damage.

Unsurprisingly, Ms. Chief will reportedly not take part in the fairing recovery portion of SpaceX’s imminent Starlink-2 launch, although it’s starting to look like Ms. Tree will be able to attempt a catch. SpaceX will still attempt to extract both fairing halves from the Atlantic even if the catch attempt fails and appears to be preparing GO Navigator to recover the half that would have otherwise been assigned to Ms. Chief.

As implied by the Starlink-2 title, SpaceX’s first launch of 2020 will feature the third batch of 60 Starlink satellites. Excluding 9 Starlink v0.9 satellites that have been intentionally lowering their orbits over the last several months to hasten reentry, this will give SpaceX a constellation of at least 170 operational satellites less than eight months after the company began launching the satellites.

This may not immediately seem significant but 170 operational satellites in orbit could make Starlink the world’s largest satellite constellation and SpaceX the world’s largest constellation operator. The only known competitor that comes close is Planet Labs, an Earth observation company believed to have approximately 150-170 operational satellites in orbit – most of which are 5-10 kg (10-20 lb) ‘Doves’ roughly the size of a loaf of bread.

Put another way, after Starlink-2, SpaceX will have around 45 metric tons (100,000 lb) of functional Starlink satellites in orbit, a constellation mass probably only rivaled by major geostationary commsat operators, global navigation satellites, and a few other high-value military constellations.

Meanwhile, according to NASASpaceflight.com, SpaceX has assigned Falcon 9 booster B1049.3 to its Starlink-2 mission, meaning that the launch will mark the second time that a single SpaceX rocket has flown four orbital-class missions. This follows on the footsteps of the November 11th, 2019 Starlink-1 launch, which saw Falcon 9 B1048 become the first booster to fly four times.

At this point, SpaceX has two additional Starlink launches scheduled in January and has plans for as many as 38 orbital launches throughout 2020. To complete that incredibly ambitious manifest, SpaceX will have to dig deep into its fleet of reusable rockets, meaning that Falcon 9 B1049’s imminent fourth launch is almost certainly just the tip of the iceberg. Falcon 9 B1049 is scheduled to launch SpaceX’s Starlink-2 mission no earlier than (NET) 9:20 pm ET, January 6th (02:20 UTC, Jan 7).

Corvette art comes with a matching car
Ferrari declines to give full control of its supercars to the computer
VW sticks to Porsche IPO plan, eyes battery unit listing as soon as 2023
Harley-Davidson’s Serial 1 Takes Things Up A Notch With The SWITCH/MTN
2023 Honda HR-V