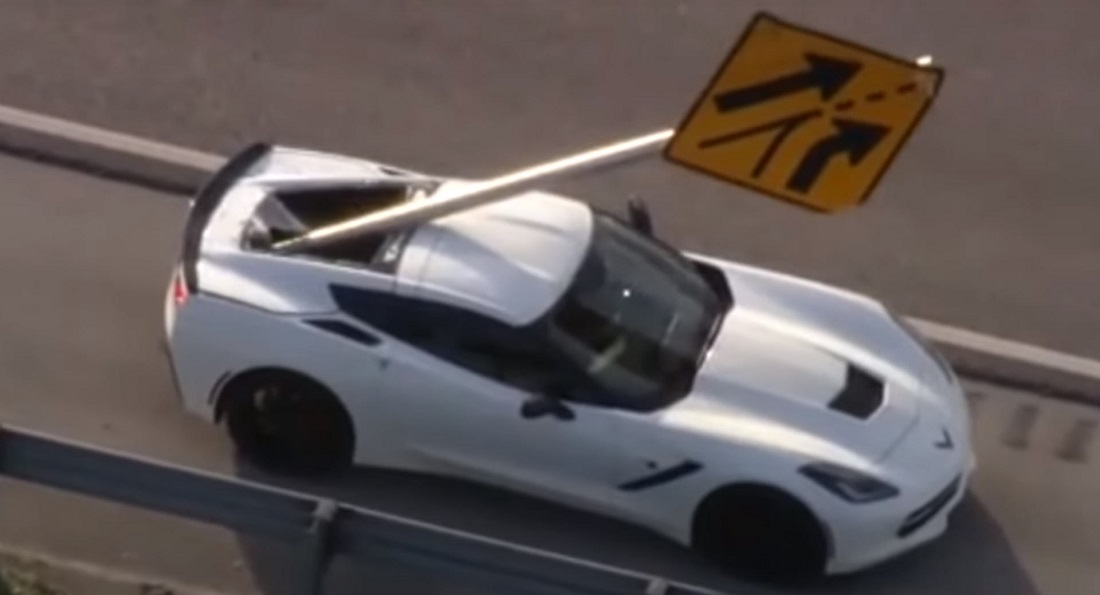 
Crazy has a whole different meaning in Florida and state isn’t disappointing as a bizarre accident turned a Corvette C7 into the automotive version of shish kabob.

While police are still trying to figure out what happened, WSVN says there was a multi-vehicle accident on Interstate 95 in Hallandale Beach on New Year’s Eve. While crashes aren’t too unusual, this accident apparently toppled a merge sign which fell onto the roadway.

The sign was then hit by oncoming traffic which sent it flying into the air. The sign then crashed through the rear window of a Corvette owned by a man named Malcolm.

He told the station that he originally thought someone rear ended him and didn’t even know about the sign until he got out of the car to look at the damage. Needless to say, Malcolm described the event as pretty scary.

Malcolm’s Corvette wasn’t the only vehicle damaged in the incident as the station also saw a Mercedes which looked like the front fender and hood were sheered by the sign. WSVN also spoke to Juan Montoya whose wife was driving her Honda Pilot at the time of the crash. While the vehicle appears relatively unharmed, the airbags deployed and his wife was so shaken that she apparently suffered a panic attack and had to be transported to a nearby hospital.

While no one appears to have been injured, Malcolm’s probably happy he was driving the mid-engine Corvette C8.

H/T to The Drive