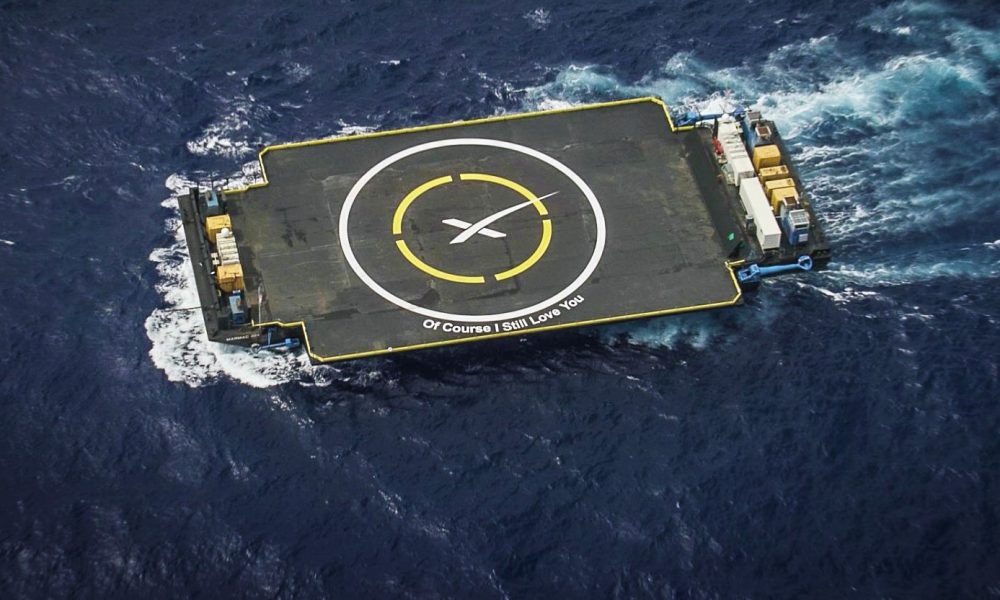 SpaceX has delayed the first orbital launch of the new year by a handful of days to allow both Falcon 9 and the drone ship it’s scheduled to land on the opportunity to dodge bad weather on the Florida coast and out in the Atlantic Ocean.

Originally scheduled to launch no earlier than December 30th, SpaceX delayed its next mission – Starlink-2 – to January 3rd for unknown reasons. Weather on the new date was unfortunately forecast to be terrible at SpaceX’s LC-40 launch pad and had a 60% chance of scrubbing the mission. SpaceX must have been at least as concerned about conditions for drone ship Of Course I Still Love You (OCISLY) in the Atlantic Ocean, as the company ultimately skipped over a 90%-GO backup window on January 4th for the latest launch target – January 6th.

Historically, only a few Falcon launches have been delayed for booster recovery purposes, but it’s been apparent that – while incredibly sturdy – some of the tacked-on equipment installed on SpaceX’s drone ships (modified barges) can be easily damaged by high seas. Perhaps more importantly, high seas (and thus a pitching drone ship deck) can make booster landings much riskier. Bad luck could easily cause a booster to cut off its landing burn at exactly sea level but still be a dozen or more feet above the drone ship’s deck if it’s coincidentally in the trough of a big swell, potentially destroying or damaging the rocket.

Ultimately, on missions where SpaceX has nothing to lose by delaying the launch, the company now puts a successful booster recovery much higher on its list of priorities. As recently as March 2018, SpaceX intentionally expended a new Falcon 9 booster because ocean conditions would have been extremely risky to OCISLY and crew and the company (or customer) had no interest in delaying the launch further to wait for calmer seas.

By all appearances, that is – for the most part – no longer the case. SpaceX would likely expend a rocket for a few days of schedule for high-priority customers like the USAF and especially NASA, where even a few days of delays could trigger several years of delays to quite literally wait for the planets to realign. It has and will continue to require a significant culture shift in the market for launch but SpaceX is clearly changing those norms and expectations bit by bit, to the point that the company was recently willing to delay Cargo Dragon launches for NASA to ensure that the mission’s Falcon 9 booster the best possible chance of recovery.

For an internal Starlink launch, delaying the mission to prevent drone ship damage and ensure Falcon 9 recovery is thus an absolute no-brainer. Starlink-2 is also partially unique because it will mark the second time a Falcon 9 booster launches for the fourth time, following on the footsteps of B1048 after it became the first booster to launch four times during SpaceX’s November 2019 Starlink-1 mission.

B1048 thus became SpaceX’s lone pathfinder for Falcon 9 booster reusability, hopefully providing excellent insight and some unequivocal physical data to determine the rocket’s health and readiness for a 5th launch. Still, even though the sample sizes available to even the most prolific orbital launch vehicles would make any statistician cringe, it’s safe to say that two data points are better than one, and B1049 – scheduled to launch for the fourth time on Starlink-2 – would thus be quite valuable to SpaceX’s recovery engineers and technicians.

Only one additional Falcon 9 booster – B1056 – has already flown three missions, meaning that SpaceX will – at best – likely have to suffice with three data points (B1048, B1049, B1056) before moving onto the next reusability milestone – launching the same booster five times. Ultimately, every time SpaceX pushes that envelope and demonstrates that Falcon boosters can be definitively reused 3 or 4 or 5 times, the company multiplies the number of launches its fleet of booster can perform by a factor of two.

For, say, the eight flightworthy boosters in SpaceX’s existing fleet, proving that a 4th reuse is possible will ultimately allow the company to squeeze an additional seven launches from existing hardware with almost zero capital investment. For now, the fourth flight of Falcon 9 boosters will remain cutting edge, but with more than three-dozen launches planned in 2020, it’s all but guaranteed that SpaceX will push the envelope of reusability like never before in the coming months.