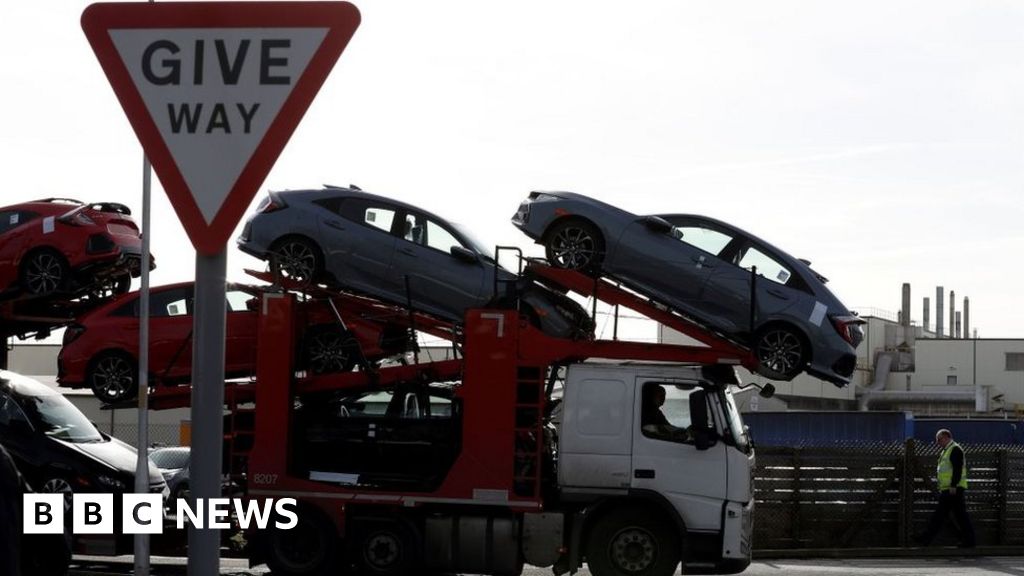 New car registrations in the UK last year fell to their lowest level since 2013, according to the Society of Motor Manufacturers and Traders (SMMT).

It was the third consecutive year of decline, and the SMMT expects that trend to continue throughout 2020.

Those expectations are largely due to weak consumer confidence and confusion over clean-air legislation.

It says new rules will require a huge expansion in the use of electric and hybrid cars.

But according to the SMMT’s chief executive, Mike Hawes, the fallout from Brexit remains the biggest “clear and present danger” to the sector in the UK.

Figures due out later today are expected to show a total of 2.31 million new cars were registered in 2019, down 2% compared to the year before.

Since reaching a record high of 2.69 million vehicles in 2016, the market has been steadily contracting, in response to what Mr Hawes describes as a “perfect storm” for the industry.

A key factor has been the collapse in demand for diesel-powered cars, which fell by 22% compared to 2018.

Where once they accounted for half of all new cars sold, now they make up just a quarter of the market.

That, combined with political uncertainty and a general fall in consumer confidence, has meant many potential buyers have decided to hang on to their old cars rather than investing in in new ones.

“You can never put it down to one single factor. It has been a perfect storm over the past few years”, says Mr Hawes.

“It’s really no surprise the market has been declining. That’s why we need a return of confidence and strong economic conditions”.

The situation is not expected to improve this year, however, with the SMMT forecasting a further 1.6 % fall in registrations in 2020.

One area in which sales have increased dramatically over the past year is the market for ‘alternatively fuelled vehicles’, in other words electric cars and hybrids. They rose by more than a fifth. Registrations of pure-electric cars were up 144%, albeit from a very low level.

The problem for the industry is that this increase is not happening nearly fast enough. New EU rules which are being phased in this year, and which enter fully into force in 2021, oblige manufacturers to cut the average CO2 emissions of their new car fleets dramatically – or face swingeing fines.

These targets are expected to remain in force, even after the UK has left the EU. But they imply a cut of more than a third in overall CO2 output, and the industry believes that meeting them will be extremely challenging.

In reality, manufacturers will not rely solely on selling more low- or zero-emission vehicles in order to meet the targets, they will also be able to withdraw their most-polluting models and sell more efficient petrol and diesel vehicles, for example.

But sales of electric and hybrid vehicles will still need to rise very substantially, and Mr Hawes insists government must play a role.

“These are still expensive technologies. They carry a price premium,” he says.

“That’s why incentives are so significant in determining the uptake.”

But of all the clouds hanging over the industry, one remains darker than the rest in the eyes of the SMMT: the aftermath of Brexit.

Although the UK is due to leave the EU on 31 January January, what happens after the transition period remains uncertain.

The government insists it will be able to conclude a trade deal with the EU by the end of the year.

But if that doesn’t happen, there remains the possibility that the movement of cars and car parts across the channel could be subject to steep tariffs or disruptive border checks and delays.

“That is probably the clear and present danger,” says Mr Hawes

“That is right before us now.”