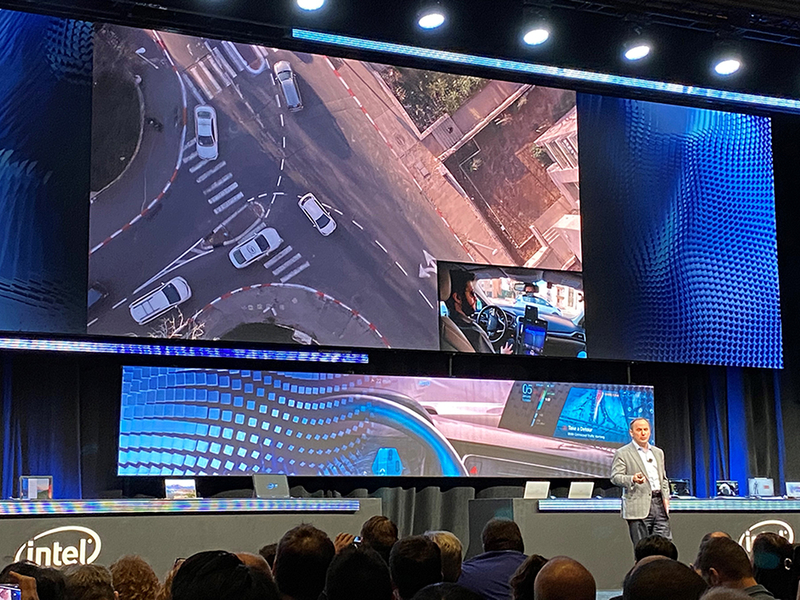 LAS VEGAS – At the start of CES week, Intel focused more on a holistic approach to data gathered from new technologies — along with 5G, artificial intelligence and edge computing — without going deep into any new vehicle programs. But CEO Bob Swan and other executives presented the company’s vision for “innovation through intelligence,” which includes the company’s approach to transportation.

Joined by other Intel executives on Monday, Swan outlined computing-enabled intelligence, which pushes Intel’s role in automotive, to media.

The chipmaker and technology company has largely claimed its stake in autonomous vehicle technology in recent years. Intel has especially done so through its subsidiary Mobileye, which it acquired in 2017. Mobileye, primarily an advanced driver assistance systems supplier, is expanding into other vehicle technology spaces, including sensing and mapping, through partnerships with automakers such as BMW, Volkswagen and Nissan.

Intel followed the footsteps of many other automotive suppliers at CES who emphasized artificial intelligence.

“We’re building an entire stack to become a mobility service provider and our goal is simple: To bring innovative technology and intelligence to revolutionize transportation by employing the power of compute and AI,” Swan said.

Aside from its work with Mobileye, Intel also recently partnered with Chinese electric vehicle maker Nio to deploy fully autonomous vehicles in a robotaxi fleet.