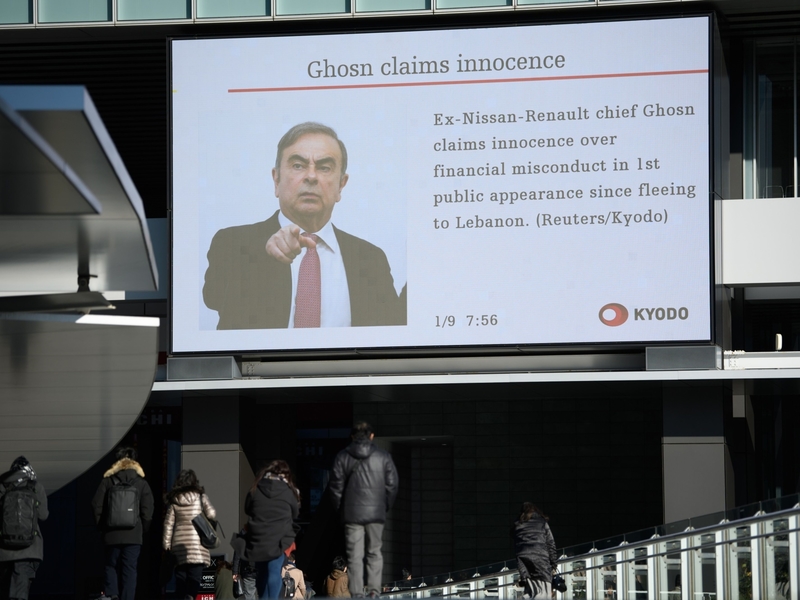 At his explosive press conference in Beirut Wednesday, Carlos Ghosn claimed the Japanese public still love him, and haven’t fallen for the image of the “cold, greedy dictator,” as he says Tokyo prosecutors have sought to paint him.

The reality is more complicated. He was once celebrated for rescuing Nissan from ruin two decades ago, earning him accolades as one of the Japan’s most revered corporate leaders. But for many in the country now, his 2018 detention and allegations of financial crimes fostered the impression that he lost his management magic, got greedy, and most importantly for a nation that prides itself on law and order — broke the rules.

“The people on the street do not think for one second that after celebrating this gaijin (foreigner) for 17 years, all of a sudden he became a villain,” Ghosn said in his lengthy news conference from Lebanon, recounting episodes while on bail where people would approach him on Tokyo’s streets and say, “We’re sorry for what’s happening to you,” and “Ganbatte kudasai Ghosn-san! (Hang in there, Mr. Ghosn!).”

Ghosn, it seems, may not have been able to read the mood of current Japanese public opinion as astutely as he once did the fortunes of Nissan when he was chief executive officer.

“The biggest problem, of course, is that Ghosn fled,” said Kenneth McElwain, a professor at the University of Tokyo’s Institute of Social Science. “That he could do it because he was wealthy, and also a non-national, may come across as ‘cheating’,” he said.

“My broad sense is that there is not that much sympathy for Ghosn,” said McElwain. “I don’t think there is much default sympathy for wealthy, white-collar defendants.”

The former CEO says he still loves Japan, the country where he spent much of his professional career. But his news conference, which included a provocative comparison between his sudden arrest and the Japanese attack on Pearl Harbor in World War II, did little to improve things.

“Ghosn’s talk was boring,” Yoichi Takahashi, a former economic adviser to Shinzo Abe, said in one of the most widely liked tweets on the news conference. “Ghosn thinks what’s mine is mine and what’s yours is also mine.”

Ghosn also didn’t make it easy for the public to hear his message. Most Japanese media outlets weren’t permitted to attend his briefing, with Ghosn saying he was only allowing in “objective” media. He spoke at 10 p.m. in Japan, which is a peak time that networks use to showcase their premium programming.

He was also eclipsed by global events, with national newspapers the next day giving top billing to Iran’s counterstrike on U.S. forces, unlike in 2018 when his arrest was the lead story in the broadsheets. Morning TV gossip shows focused on his daring escape, not on his claims of Japan having a rigged justice system or his legacy as an auto titan.

Only the smallest of the major broadcasters cut to him when he started speaking, but it had trouble keeping up with its simultaneous translation when he spoke in four languages, with Japanese not being one of them.

“He might have become yesterday’s man,” said Mitsuhiro Kunisawa, a prolific pundit on Japan’s auto industry. “It’s not like he’s going to do anything new in Japan.”

Another reason for public skepticism is at the heart of the whole affair — Ghosn’s salary. By any standard he was already being paid exorbitantly in Japan, a country where U.S.-style financial packages are unheard of for its top executives. During his time at Nissan he was frequently the best-paid CEO in the country, earning many multiples that of the head of larger rival Toyota.

Ghosn also blamed Japan’s prosecutors for a relentless series of leaks after his arrest, which he contends painted a picture of him as a man not satisfied with an excessive salary and lavish lifestyle. His team struggled to take control of the narrative.

As a result, by the time Ghosn was released in March, 54 percent in a TV Asahi poll agreed it had been necessary to keep him imprisoned for almost four months on charges of financial crimes, where the primary victims were Nissan shareholders. Only 25 percent opposed to the prolonged detention of a person convicted of no crime, but that was before his shocking flight from the country’s justice.

“As a Japanese person, it makes me mad,” Yohei Yamaguchi, an investor and commentator, said of Ghosn’s escape on a late-night Fuji TV news program immediately following the press conference.

Given his violation of his bail conditions, it seems unlikely Ghosn, who has a Lebanese passport, will ever set foot in Japan again. Lebanon doesn’t have an extradition treaty with Japan and has given no indication it will send him back.

But as his legacy fades, the mood could shift. Takafumi Horie, a high-flying Internet executive in the 2000s who served more than two years in jail on charges of fraudulent accounting, rehabilitated himself as an investor and commentator, and frequently appears on TV.

“Japanese people might say they’re angry, but they’re not really angry,” Kunisawa said. “It’s not like he stole their taxes, and unless you’re a shareholder, he hasn’t personally done you any damage.”

“Even now if Ghosn said hello to a regular Japanese person on the street, they’d say hello back and indeed probably say ‘ganbatte kudasai!’”

2022 Ford Bronco
Tesla continues to tease us all with Semi sightings across the U.S.
Harley-Davidson’s Serial 1 Takes Things Up A Notch With The SWITCH/MTN
2023 Honda HR-V
2023 Chevrolet Colorado ZR2 teased, debuts July 28