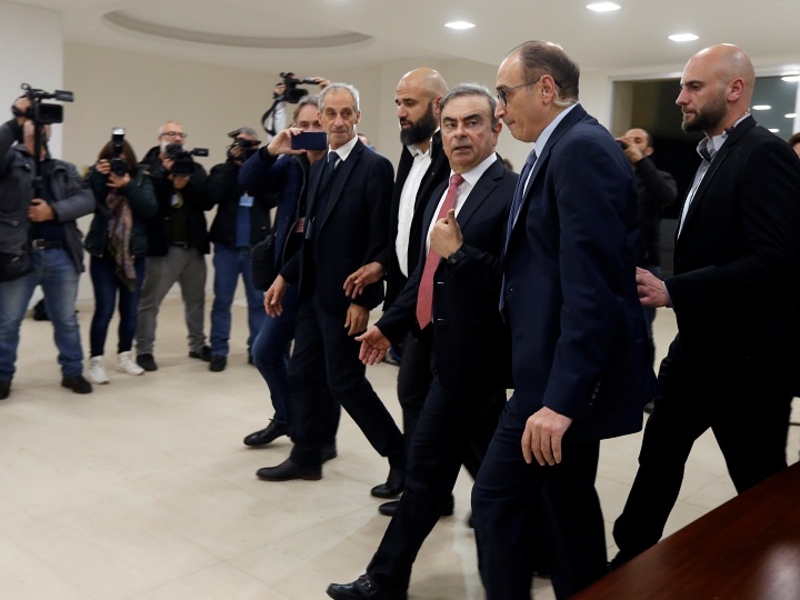 BEIRUT — Moments before launching into his press conference in Beirut last week, Carlos Ghosn was enthusiastically greeted by a throng of local journalists who crowded around his lectern, taking turns to embrace the former executive and snapping souvenir selfies.

Ghosn happily returned the warm feelings. During his 2 1/2-hour talk, he heaped praise on Lebanon, where he fled at the end of last month, while unleashing a bitter broadside at the Japanese establishment that he says tried to destroy him.

“Today, I am proud to be Lebanese,” Ghosn told a packed room in Arabic, the local crowd erupting in the first of many waves of cheers and applause. “Because if there is a country that stood by me amid such difficulties, it is Lebanon.”

Ghosn may have dramatically broken with Japan, the country where his revival of Nissan made him a folk hero, but he is now reunited with Lebanon, where he grew up and still enjoys the backing of elite circles all the way up to the president.

His escape from Japanese house arrest has made him arguably Lebanon’s best-known resident, and he is drawing from his deep pool of influential businessmen, lawyers and public officials in his quest to clear his name.

In a country whose emigrants outnumber the citizens living at home, Ghosn has long been celebrated as Lebanon’s quintessential success story — a global executive always on the move, effortlessly weaving in and out of different cultures and languages and rubbing shoulders with the elites at the Davos World Economic Forum.

Government officials are keen not to overstate the level of support that Ghosn gets, saying it is a service provided to any citizen who enters the country legally. While there is an international arrest warrant out for Ghosn, Lebanon has no extradition accord with Japan, meaning he is safe from deportation.

Supporting its prodigal son while not looking like it is giving favors to the moneyed elite is a delicate balancing act in a country that has grown weary of preferential treatment of the upper class. Weeks-long anti-corruption protests toppled the government in October amid a severe economic slowdown. Power rationing, water shortages, and a blossoming black market for the local currency have become commonplace.

Even during his globetrotting days, Ghosn maintained his ties with Lebanon. He owns a small stake in Saradar Bank, one of the country’s main lenders, and he co-founded a winery and a real-estate project in the northern region covered by the cedar forest made famous on the national flag.

The Saradar family has played a pivotal role in the country’s banking sector for decades and the company survived the ups and downs of Lebanon’s drawn-out civil war.

The Lebanese government and office of President Michel Aoun remained in close touch with Ghosn following his arrest in late 2018 at a Tokyo airport. Officials visited the disgraced manager during his months in detention, and they requested Japan move Ghosn’s trial to Beirut.

Ghosn praised the government for its support and avoided any details of his audacious escape, saying he did not want to compromise anyone who may have been involved.

“Ghosn returned to his safety net in Lebanon,” said Sami Nader, head of the Beirut-based Levant Institute for strategic affairs. “Most Lebanese still like him despite the allegations.”

One of Ghosn’s key local allies is Carlos Abou Jaoudeh, founder and managing partner of the namesake law firm who is part of Ghosn’s local defense team and steers his client’s interactions with local law-enforcement officials.

Among the country’s most prominent lawyers, Abou Jaoudeh has worked on finance deals and government affairs, giving him a robust corporate and political network.

Ghosn’s political ties in Lebanon are mostly aligned with the entourage of Aoun. The president is founder of the Free Patriotic Movement, a party affiliated with the Maronite Christian group that makes up about a quarter of the population and of which Ghosn is a member.

Since coming to power in 2016, Aoun — a former army general — used his presidential pulpit to influence policy making, departing from a largely ceremonial role. Local reports said Ghosn and Aoun have met in Beirut, though neither side has officially confirmed or denied the encounter.

“Ghosn is a Lebanese citizen after all and the government should grant him his legal rights,” said Rosanna Bou Monsef, a columnist at Annahar newspaper.

With a government in limbo and a barely functioning parliament, the president remains the only central authority in the country, and Ghosn has that on his side, she said.

Ghosn, too, understands that he needs to tread carefully. He apologized publicly for a visit to Israel in 2008, a border transgression that is considered a criminal offense in Lebanon. Indeed, a lawsuit was filed against Ghosn within days of his arrival in Beirut.

But even if Ghosn were to be tried in Lebanon, the risk of a harsh penalty is slim, legal experts say. More likely is a fine, the typical verdict in a country that has rarely convicted politicians or influential people.

As the global coverage of his Beirut press appearance proved, Ghosn remains a master of harnessing publicity to hammer home his message. But he’s equally adept at avoiding the public eye when it appears more opportune.

On Thursday, Ghosn was summoned to Beirut’s judicial palace for questioning with local prosecutors. Anticipating his arrival, a throng of photographers waited for him on the street outside the main entrance. But in typical Ghosn fashion, he slipped silently into the building via a back entrance reserved for legal officials.

Once more, Ghosn had outfoxed his pursuers.