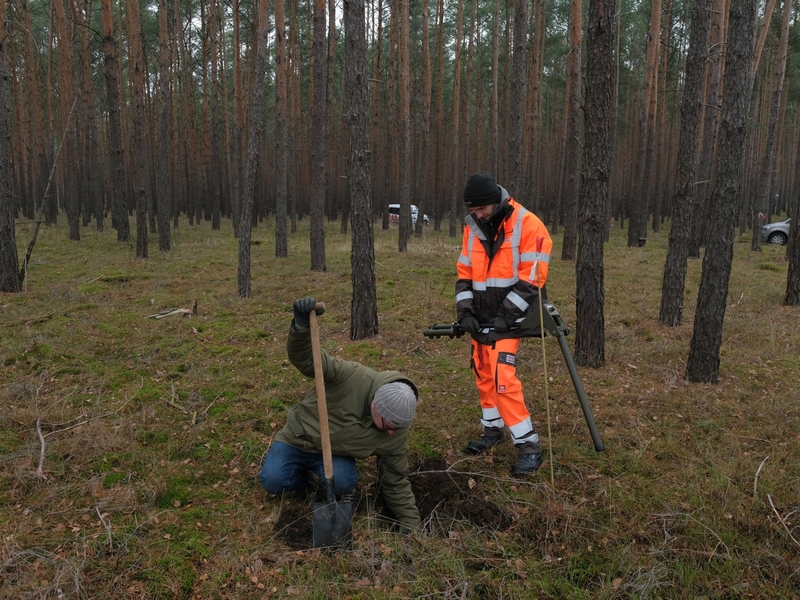 BERLIN — German rangers stand guard to visitors away from a nondescript stretch of forest near Berlin, where a sign nearby warns of “Lebensgefahr” (danger to life).

The precautions are part of the frantic activity underway to set up Tesla’s latest assembly plant, Elon Musk’s most daring attack yet on the German auto establishment.

Workers wielding metal detectors have started combing through an area covering some 200 soccer pitches to search for old wartime ammunition beneath the sandy surface of tiny Gruenheide.

It’s the first stage to prepare a site that could build as many as 500,000 cars a year, employ 12,000 people and pose a serious challenge to Volkswagen Group, Daimler and BMW as they all push toward an electric future.

Once deemed free of World War II explosives, trucks will roll in to clear thousands of trees in the first stage of development. All this work needs to be done by the end of February to meet Tesla’s aggressive timetable.

The project represents a second chance for the quiet town, nestled between two lakes on the edge of a nature reserve southeast of Berlin.

Gruenheide lost out on a similar factory two decades ago, when BMW opted for Leipzig. That missed opportunity helped town officials to move quickly when Tesla expressed interest in building its first European factory in Germany, with a plot set aside for industrial use and offering easy access to the Autobahn and rail lines.

“The investment is a unique opportunity,” Mayor Arne Christiani said in his office, where a map of the Tesla project hangs on the wall. “It gives young people with a good education or a university degree the possibility to stay in our region–an option that didn’t exist in past years.”

If it clears Germany’s red tape, the plant will make batteries, powertrains and vehicles, including the Model Y crossover, the Model 3 sedan and future cars too, according to company filings.

The factory hall will include a pressing plant, paint shop and seat manufacturing in a building that will be 744 meters (2,440 feet) long — nearly triple the length of the Titanic. And, there is enough space at the site for four such facilities.

Musk is taking his fight for the future of transport into the heartland of the combustion engine, where the established players once laughed off Tesla as an upstart on a feeble financial footing that could not compete with their rich engineering heritage.

Musk casually dropped the news of the plant at an awards ceremony in Berlin in November, taking the top executives of Germany’s automakers by surprise.

“Elon Musk is going where his strongest competitors are, right into the heart of the global auto industry,” said Juergen Pieper, a Frankfurt-based analyst with Bankhaus Metzler. “No other foreign automaker has done that in decades given Germany’s high wages, powerful unions and high taxes.”

Building a factory in Europe’s largest car market is a major test of Musk’s global ambitions. Demand in the region is flat, and buyers are more loyal to local brands.

Meanwhile, labor costs in Germany’s auto sector are 50 percent higher than in the U.S. and five times what they are in Poland, just an hour’s drive away from Gruenheide.

On the positive side, electric cars require less labor to build, and Germany has a deep reserve of auto experts. The location also offers the advantage of being in close proximity to the country’s leaders in Berlin.

Under pressure for being slow to pick up on the electric-car shift, Chancellor Angela Merkel’s government extended a welcoming hand to Musk. Economy Minister Peter Altmaier offered to try to ease regulatory hurdles that may snag construction. “There’s a lot at stake” in Tesla’s plan, he said soon after the project was announced.

Musk’s incursion comes at a strategically opportune time. Riding a wave of optimism after successfully starting deliveries of its China-built Model 3 sedans a year after breaking ground on a factory there, Tesla’s stock has doubled in the past three months.

Meanwhile, German peers are struggling with the costly shift away from combustion engines. VW and Daimler announced thousands of job cuts last year, when German car production fell to its lowest level in almost a quarter of a century.

For Gruenheide, the planned investment has suddenly transformed the town of 8,700 people into a sought-after location. Local officials receive development proposals on a daily basis: anything from 22-story apartment towers to U.S.-style shopping malls, said Christiani, who hopes the plant will help unlock financing for public transport, schools and medical facilities.

In the town hall, five thick binders are available for locals to peruse the project’s details, including 463 trucks expected to roll into the plant each day, a rail spur for train deliveries and an on-site fire brigade.

Tesla still has obstacles to overcome. Residents have the chance to raise objections, and then the company has to carry out initiatives to protect wildlife — including scaring off any wolves in the area, relocating hibernating bats and removing lizards and snakes until construction is finished. The automaker also has to replace felled trees.

The mayor expects these hurdles to be cleared so that the first made-in-Gruenheide Teslas can roll out of the new plant in July 2021.

“The forest is classified as a harvest-ready, inferior pine forest,” Christiani said. “It was never supposed to be a rain forest.”