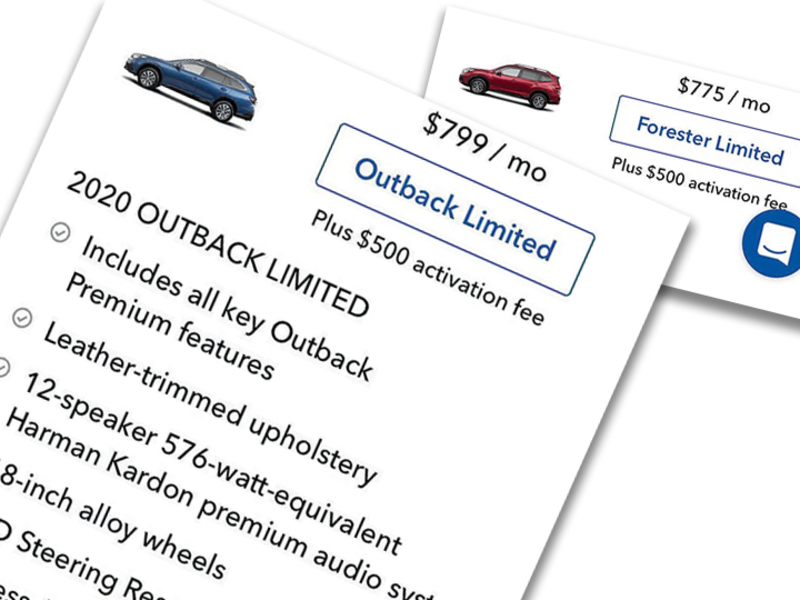 For a pioneer in the fledgling automotive subscription arena, 2020 is shaping up to be a promising year.

“From our perspective, 2019 is the year in which we see a lot of foundational bets being made,” he said during the presentation. “In fact, I was very surprised by the fact that OEM activity surged so much during the year. I actually didn’t expect it to grow as fast as it did. And, again, all of these programs are relatively small, but the point is they’re green shoots I think that are starting to pop up.”

Several of Clutch’s automaker clients are developing and deploying new subscription offerings this year, Zappa told Automotive News. He said he expects a few mainstream brands to make announcements in the first or second quarter.

“The price points are going to be substantially different because the underlying vehicles are much cheaper and the delivery models, meaning how they’re delivered to the consumer, are less high-touch, so there’s less cost,” Zappa said.

He also said new subscription models, including a single-vehicle option in which the customer has access to one vehicle instead of multiple vehicles, are coming.

GM’s Book by Cadillac is relaunching in February, after the program went on hiatus in 2018. Unlike its first incarnation, Book will use Clutch.

Sean Thornton, who works on GM’s customer-experience team, said Clutch offered the automaker the quickest path to go to market.

“We needed something that enabled us to get to market quickly and have some agility in our offerings,” he said.

“That’s where Clutch comes into the fold. Their platform allowed us to deploy a subscription-based model or short-terms rentals or test drives, all from that one platform.”

While Toyota Motor Corp. has a relationship with Clutch, it has a presence in one region: Seattle, with Lexus Complete.

“We don’t have any other details to share regarding a Toyota-specific program,” Cox Automotive spokesman Andrew Nicolai said in an email.

Zappa said the number of vehicles used for subscription on its platform has grown by five times over the past year, though he declined to provide exact figures. Clutch also is working with nearly 200 dealership rooftops, an eightfold increase from a year ago, Zappa said.

“Dealers are our largest customer base, we actually sell to them,” Zappa said during the presentation. “We actually view it as a tremendous opportunity for dealers to rethink their relationship with the consumer.”

As Clutch’s roster of automakers expands, so too are the types of vehicles that consumers can choose from.

Driven by its range of four all-wheel-drive crossovers, Subaru of America is fresh off of its 11th consecutive year of record U.S. sales. Those four nameplates will be the models offered in its subscription program.

“Subaru has launched a subscription, as well as a rental program, but both are currently in a pilot phase [with a handful of retailers] as we all work together to understand consumer demand trends and the overall subscription economy,” Jeff Walters, senior vice president of sales, said in a statement to Automotive News.

There is a one-time $500 activation charge and the starting monthly fee varies across the four models. The Crosstrek starts at $699, the Forester starts at $725, the Outback starts at $750 and the Ascent starts at $850. The program’s website notes that each vehicle is either a Premium or Limited trim, which, outside of the Crosstrek, are the midrange trims.

Each subscription is for a minimum of one year. Subscriptions include an allowance of 14,400 miles per year, a liability insurance policy, service, maintenance, roadside assistance and concierge pickup and delivery of the vehicle.

According to Just Drive’s website, customers who don’t subscribe to the Ascent have the option to upgrade to the three-row crossover up to three times per year, for up to one week at a time.