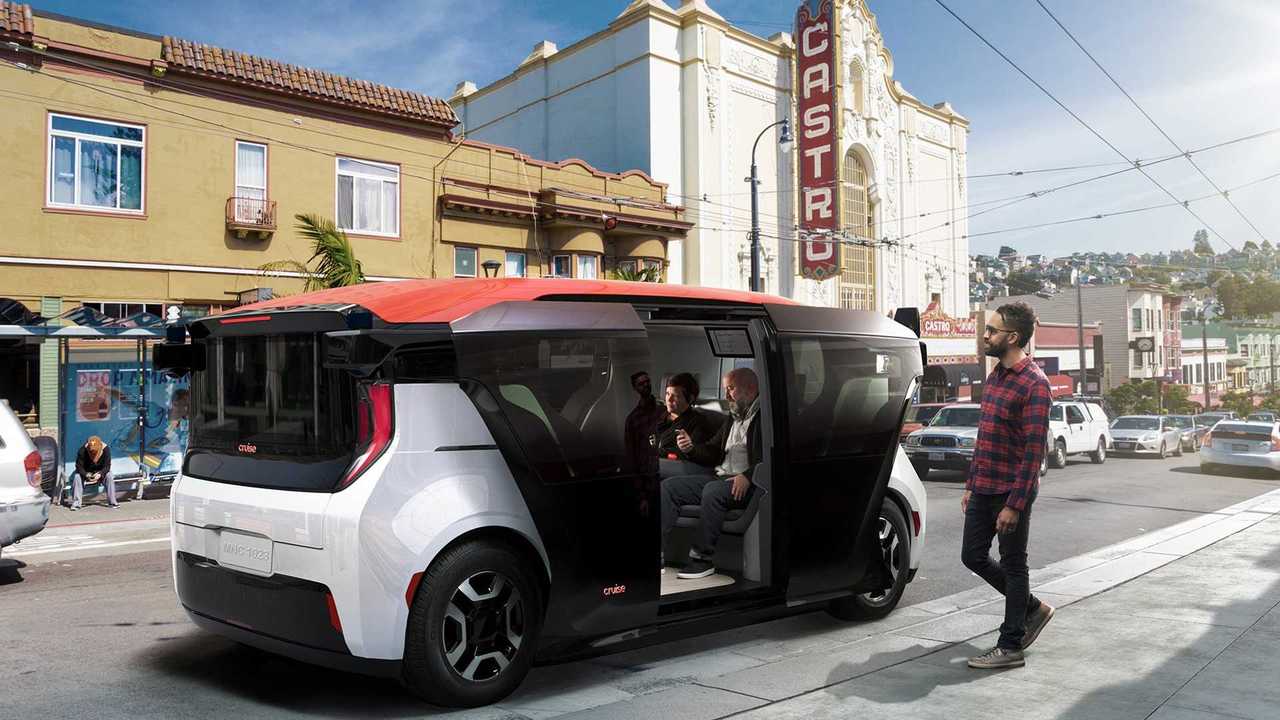 Every time we hit the road, we’re faced with tradeoffs: Should I spend 30 bucks, or 30 minutes of my time? Should I run that red light and shave a few minutes off my trip, or hang back and be safe?

These are small choices, but they create some of our biggest problems. That’s because there’s an inherent tension between what’s good for us and what’s good for the world. We know that taking the bus would be better for the environment — but on a Friday at rush hour, saving the planet just doesn’t seem worth missing dinner with our kids.

But what if we didn’t have to choose? What if we could create a different transportation system entirely — one that is safer, better and more affordable for us, for our cities and for our planet?

Earlier today, we shared what we think could be possible and unveiled the first step toward that vision. We call it the Cruise Origin.

Fifty years ago, cars looked like, in a word, cars.

These cars were driven by human operators and came stuffed with a whole lot of equipment for that human operator to use: a steering wheel, pedals, knobs, and dials. And, of course, a fossil fuel-burning engine up front and a gas tank in the rear.

Over the last five decades, we’ve achieved unprecedented technological advancement in everything from computers to medicine. But the automobile? It looks pretty much the same.

All that stuff from the old-school car has stayed put — the steering wheel, the controls, the gas tank — leaving precious little room for each passenger.

Fifty years, and all we’ve gotten is one incremental change after another. We’re still cramped in a tiny space. We’re still burning fossil fuels, polluting our cities and destroying our planet. We’re still spending hours out of our day stuck in traffic, inventing new swear words. We’re still dying at a rate of more than 3,000 people per day.

At Cruise, with our deep partnerships with GM and Honda, we have roots in the automotive industry. But we didn’t just want to improve on the car. We wanted to reimagine transportation as if the car had never existed.

What we came up with isn’t a car that you buy. It’s an experience that you share.

It’s self-driven. It’s all-electric. It’s shared. And it’s our answer to the question about what transportation system you’d build, if you could start from scratch.

When we got rid of all that human-driver stuff, we traded it for something precious: space.

The Cruise Origin looks big. But in fact, it’s no bigger than your average car. It’s just more efficient, making full use of the space it takes up on the road.

The doors don’t hinge outward. They slide open, so bikers are safer.

The entry is low to the ground, and three times larger than that of an average car — wide enough to make room for one person to step in while another person steps out.

Every seat is extra-legroom. And they all face each other, so you can have a conversation with family or friends.

And because we own the entire experience, from the app to the Origin to customer service, our customers will get the same consistent experience, every time. That’s really important.

Think about what happens today when you open up a traditional rideshare app, it’s like rolling the dice.

You might get a spacious, luxurious, clean ride, with a good driver. Or you might get a compact car that smells like Mountain Dew and Pine-Sol, driven by someone who’s been up since 4 a.m.

That’s a stressful way to get around. And in our view, you shouldn’t have to get lucky to feel comfortable — or safe.

Cruise riders will know what to expect every single time they open our app.

When human beings drive, we rely on our eyes and ears. But even in simple suburban environments, with 20/20 vision and perfect hearing, we can only look in one direction, and we can only see and hear so much.

The Cruise Origin is powered by a brand-new, all-electric platform built by General Motors. It’s got what’s called redundancy, meaning there are no single points of failure across sensing, compute, networking, or power — because there’s no backup human driver.

Its multi-layered sensor suite is designed to keep track of multiple people and objects — even if they’re far away, in pitch-black, or hidden by rain or fog.

Much like today’s cars when they leave the factory, other than tweaking the edges a little bit, we humans are generally stuck with our original hardware and software.

The Origin, on the other hand, is modular — which means it’s upgradeable and we won’t have to roll out a new fleet each time we build a better sensor or computer.

That means we can save money and pass these savings on to our customers, while reducing waste. Good for you, good for the world.

At this very moment, we’re running fleets of our third-generation vehicles on the roads of San Francisco, operating a rideshare service that any Cruise employee can use, 24/7. Last year alone, we accumulated nearly a million miles as we autonomously drove nearly every road in San Francisco.

That’s a lot of mileage, but what’s really important is the data contained within those miles.

Every mile in San Francisco is packed full of rich information. Which means the Origin is learning about how people drive, how to maneuver in unusual circumstances, and how to react to situations that seem impossible to predict. We’re preparing it to anticipate things that shouldn’t happen, but do.

We seek out as much entropy and chaos as we can find, and our human supervisors provide feedback on how the vehicle is driving. We even create 3D simulations of great teaching material, so that we can make every software release better than the last — creating smarter, smoother, safer rides.

Already, our self-driving cars handle urban driving — which is notoriously chaotic and unpredictable — exceptionally well. So well, in fact, that they would be able to drive across the entire country without incident, even if the country’s highways were the toughest San Francisco streets.

We’re on track to crack the superhuman threshold in urban environments, and expect to be well past that threshold by the time the Cruise Origin enters production. We’re looking at safer roads on day one.

Which brings us back to those choices: Should you choose convenience or climate? Time or money? Speed or safety?

Our vision is: you shouldn’t have to choose.

We’re clear-eyed about what this means. We know that the only way we can create a radically different transportation system, and improve life in our cities, is if we can scale. And we know that this won’t happen unless we deliver on a very simple proposition: a better experience at a lower price than what you pay to get around today.

So, we’ve done some math.

Today’s cars sit parked 95 percent of the time, racking up expensive parking fees while depreciating in value. They need a driver. They break down relatively easily. And if they make it 150,000 miles, well, lucky you.

The Cruise Origin, on the other hand, will spend most of its life in motion, working 10 times harder than your average car, day in and day out. It’s engineered to include everything you need and nothing you don’t. It doesn’t require a driver, of course. Because it’s modular, it will have a lifespan of over 1 million miles — six times more than the average car. And since GM has committed to producing millions of electric vehicles, we’ll build it for roughly half the cost of what a conventional electric SUV costs today.

All told, the average San Franciscan household driving themselves or using ridesharing, will, on average, see up to $5,000 back in their pocket every year.

At the same time, we’ll have fewer cars clogging our roads, fewer cars piled up in our parking lots, and fewer cars going to the scrap heap.

Origin means beginning. Or in this case, a new beginning for transportation — one with no more tradeoffs.