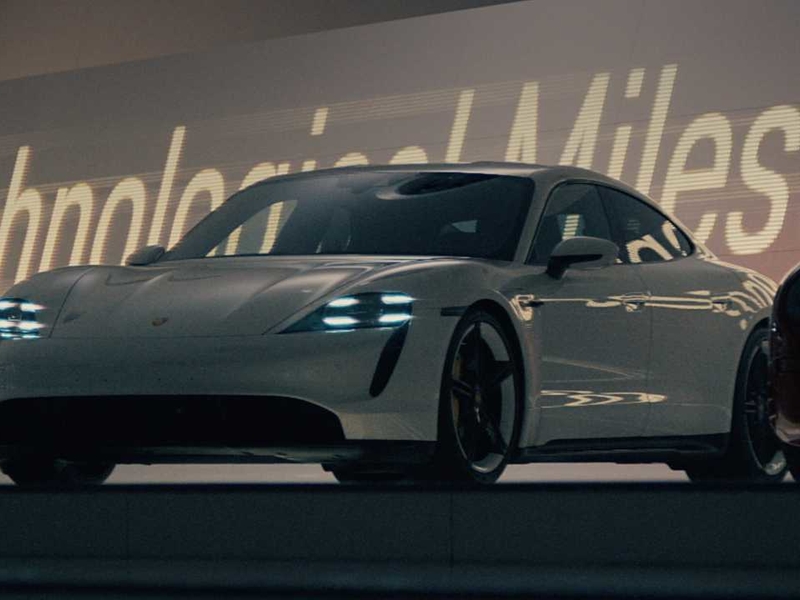 Porsche emphasizes speed — and its German heritage — in its first Super Bowl ad appearance since 1997. The sports car brand released on Friday an extended cut of the spot, which will run in the game as a 60-second ad in the first quarter.
The ad, called “The Heist” by Cramer-Krasselt, features a racing scene in which nearly a dozen Porsche models zip through Germany beginning at the Porsche Museum in Stuttgart. That is where a masked man is shown stealing the brand’s new electric Taycan from an exhibit floor.

Museum workers hop in various Porsche models from the museum’s collection — including a tractor — and chase after the Taycan. It turns out they are all just having fun, with a woman shown taking her turn as the “bad guy” in the final scene.

It was filmed in the river town of Heidelberg, Black Forest and the Zuffenhausen district of Stuttgart where Porsche is headquartered. Models shown in the ad include the 917 K race car, the 918 Spyder hybrid and the Porsche 911, which is shown as a 2020 model with modifications for closed-course stunt driving.

The ad was directed by Wayne McClammy of Hungry Man Productions.

Porsche, in a statement, said it came back to the game after a 23-year absence because it wanted to plug the all-new Taycan, its first electric vehicle, while introducing the “core of the brand to those who may not be familiar with its 70-plus years of sports car DNA.”

“The spotlight and buzz around ads at this event make it a perfect venue for reaching new fans — in a fun way that connects with the game’s themes of performance and competition,” said Klaus Zellmer, president and CEO of Porsche Cars North America Inc. “A Porsche is always a driver’s car, and the playful chase in ‘The Heist’ draws a clear line through decades of models to the Taycan. They all share the same soul.”