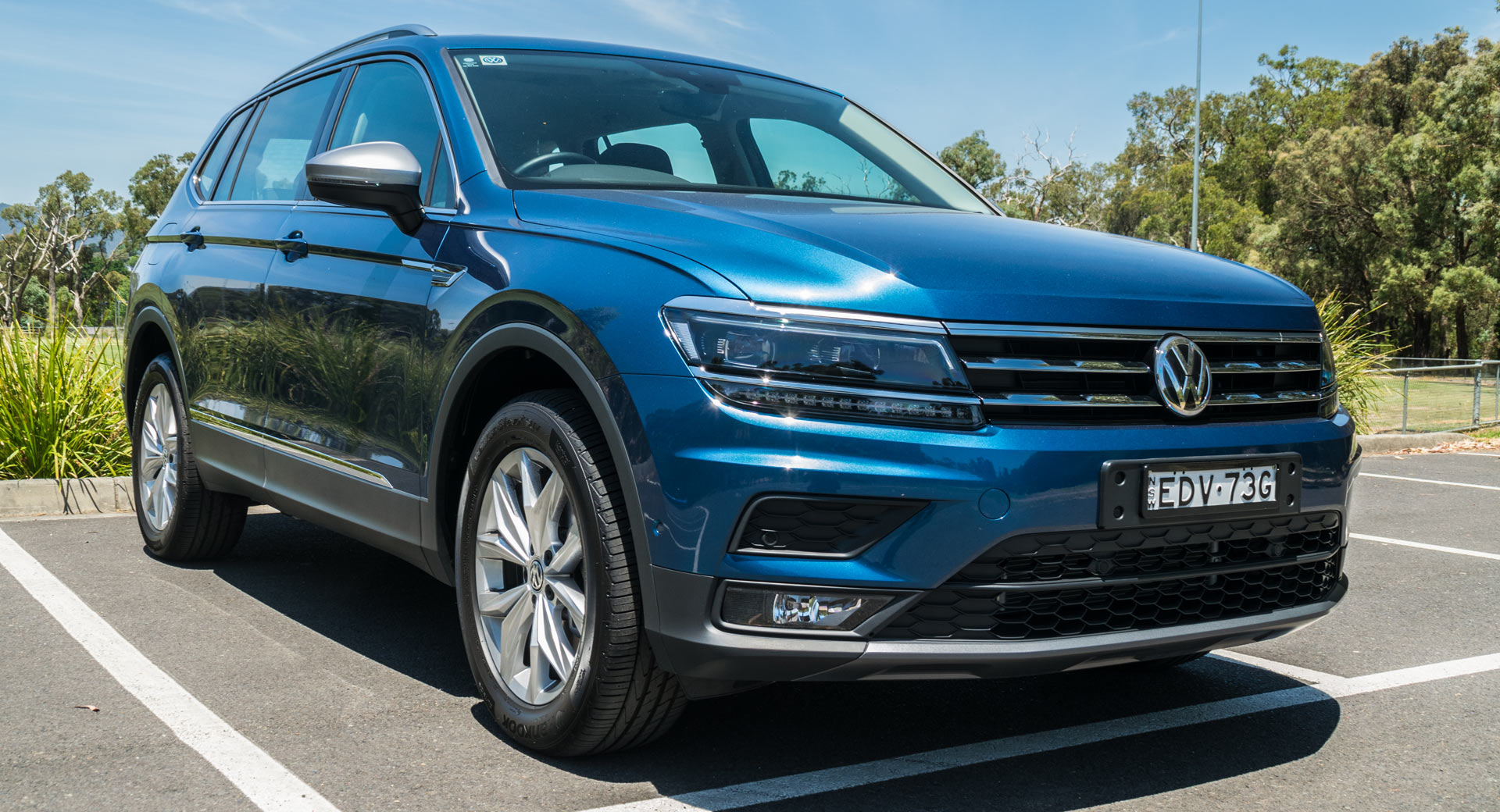 The Volkswagen Tiguan may be a compact SUV but the same thing can’t be said about its namesake with the Allspace moniker. This thing is big in room, as I recently discovered during a week-long test with the vehicle just prior to the turn of the year.

Now before we continue, we’ll remind you that while North America only gets one version of the Tiguan, the long-wheelbase (LWB) model, in many markets including Australia, VW offers both a standard-wheelbase (SWB) and the LWB tested here which is named Tiguan Allspace.

The dimensions in numbers

Yet, despite its roomy interior, the VW Tiguan Allspace 110TSI Comfortline that I tested didn’t feel that big on the road . 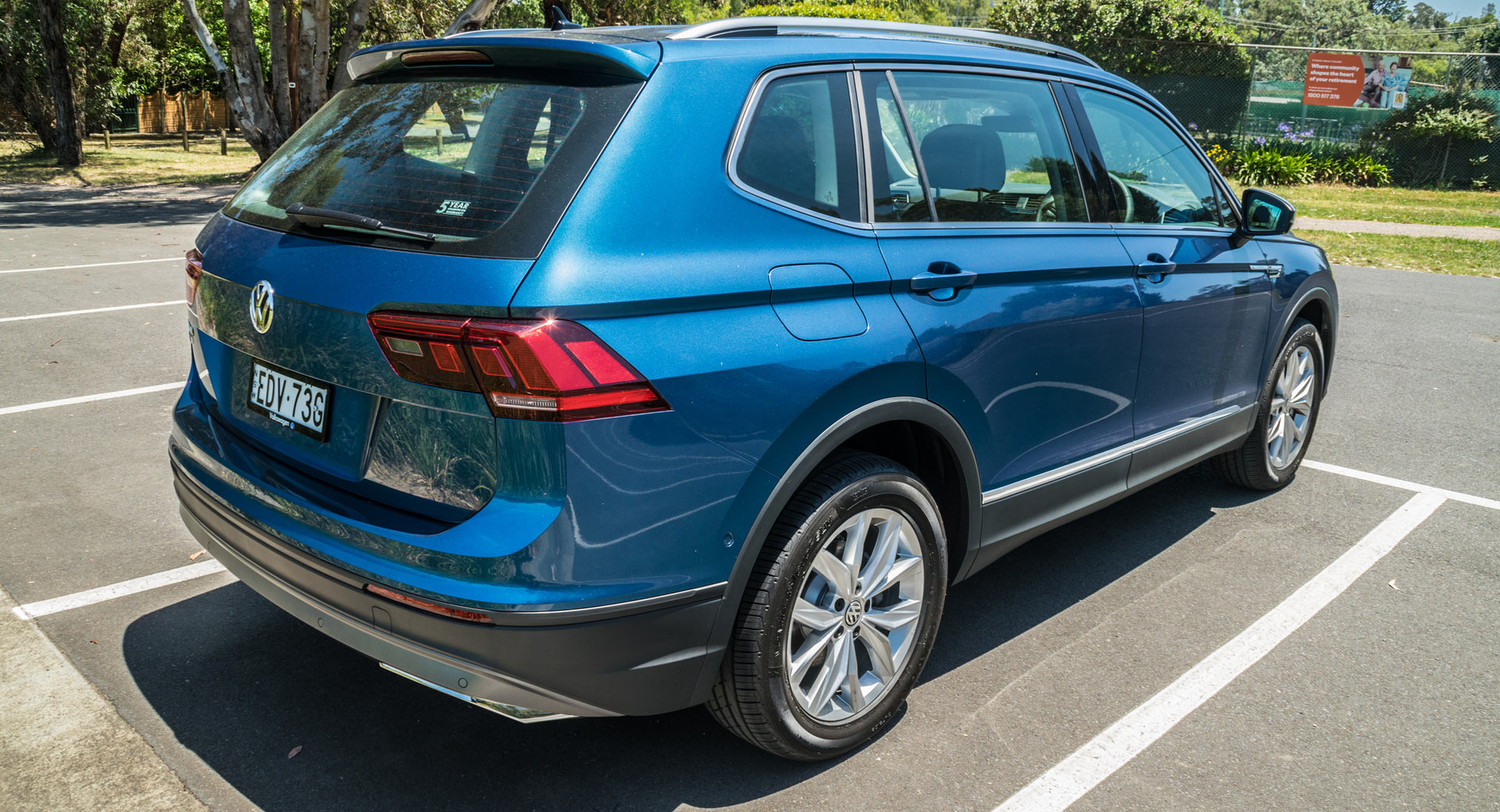 Higher-spec ‘132’ models come with a 2.0-liter turbocharged petrol engine that offers up 132 kW (177 hp) and 320 Nm (236 lb-ft) of torque that promise a 0-100km/h (62mph) in a much faster 6.8 seconds. The model I tested comes exclusively with a six-speed dual-clutch automatic transmission while the higher-spec 2.0-liter models feature a seven-speed dual-clutch.

Looking at the power and torque numbers of the Allspace 110 TSI Comfortline, it would be easy to dismiss the SUV. Jump behind the wheel, however, and it feels much more brisk than those figures would have you believe. A key reason for this is the super-smooth transmission that like so many VW’s over the years, changes between gears instantly, with very little noise, and no obvious dip in power. Drive the Tiguan blindfolded (not recommended) and you could be forgiven for thinking it only has one gear like an EV. 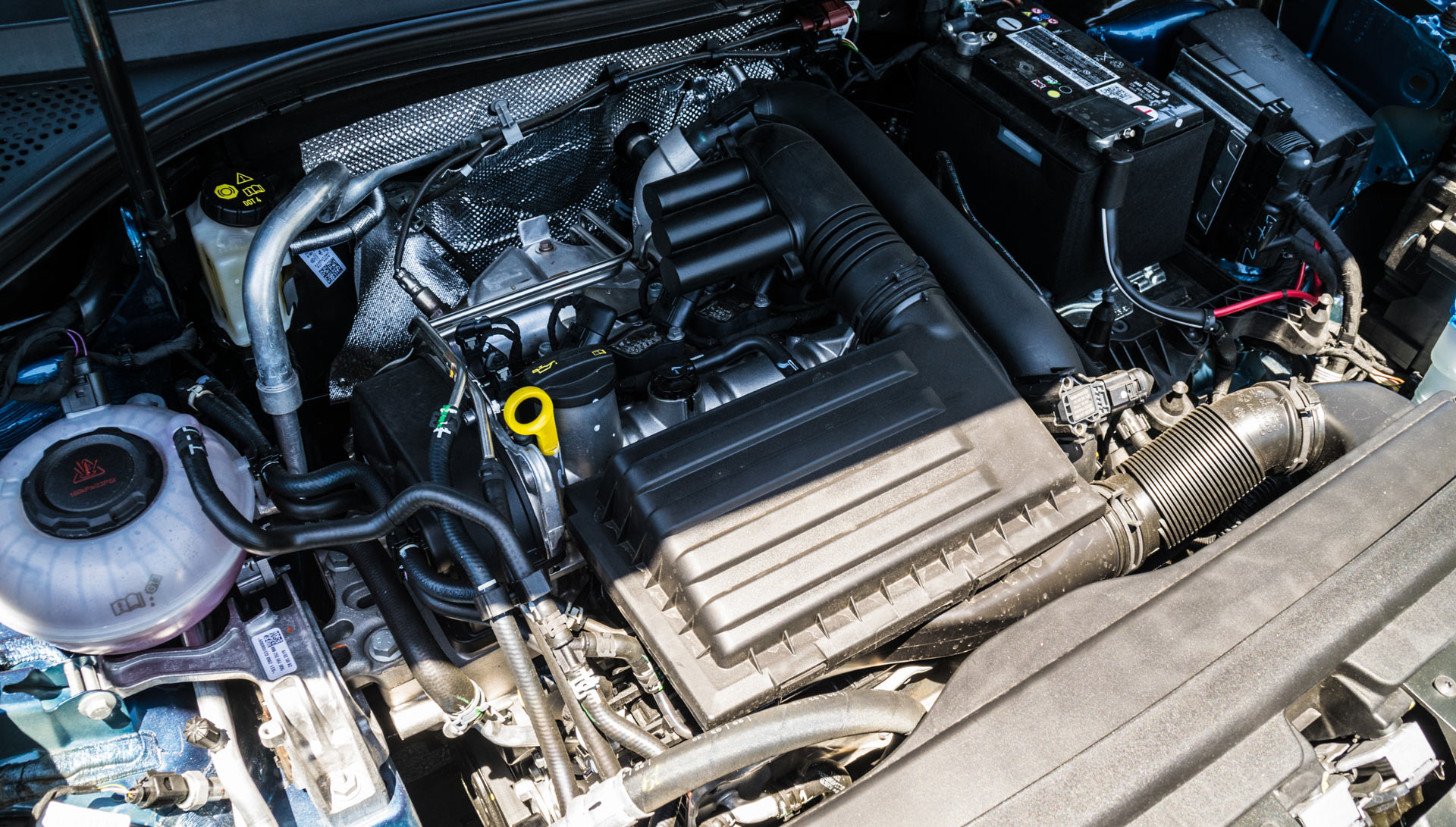 This powertrain combination isn’t without its flaws. Throttle response is a little odd and drivers will often find themselves depressing the throttle 30 per cent further than expected and waiting a full second before the engine comes to life, the transmission changes down a gear, and the Tiguan starts to accelerate.

Feels Smaller Than It Looks

Perhaps the most pleasant aspect of the Tiguan Allspace 110 TSI Comfortline is the impossibly light yet direct steering. Regardless of how fast (or slow) you’re driving, the steering remains exceptionally supple and is the key reason why the SUV feels so much smaller than it actually is. Looking out the windshield in a car park, it feels like you’re driving a tiny VW Polo, until you look in the rear-view mirror and are reminded of the Tiguan’s size that is.

The light and direct steering is particularly nice at low speeds you may find driving in busy cities or car parks. Another important aspect of the Tiguan Allspace that makes it feel smaller than it actually is is the suspension tune that helps it stay relatively flat through low- and moderate-speed corners. Ride quality is good but is on the stiff side. 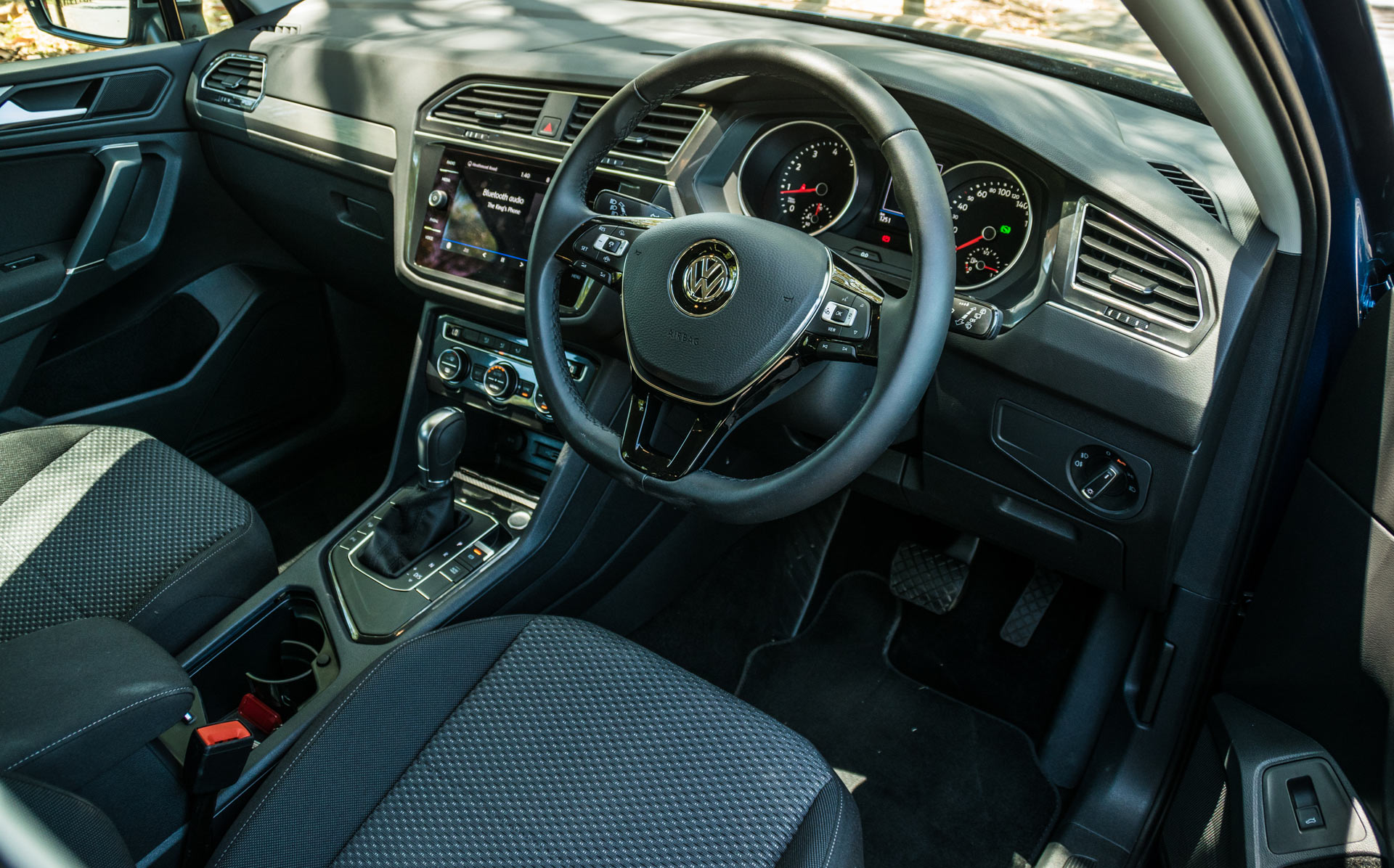 The real trump card of the Tiguan Allspace over the regular five-seat version is interior space (obviously). It feels truly gargantuan. Front row occupants get to enjoy a set of comfortable fabric seats that sit high, giving you a commanding view of the road. The steering wheel is nicely-shaped with a flat-bottom while VW’s slick touchscreen infotainment system is just an arm’s reach away complete with Apple CarPlay and Android Auto. I was particularly fond of the dashboard design thanks to its angular air vents and sharp lines. There are also two (yes, two) storage cubbies in the roof, one to store your sunglasses and a second to store other miscellaneous items.

Perfect for a growing family

The second row is just as spacious. Huge side windows let a huge amount of light into the vehicle and there are fold-out trays just like on an airliner. A rail system means the second row of seats can be slid forwards or backwards. There are also climate control vents, a USB outlet, and a 12-volt outlet out back. Found at the third-row are a pair of small seats with little headroom and little legroom although these are common traits of seven-seaters.

Fold-down the third-row, as I did most of the week, and the car offers 700 liters (24 cubic-foot) of storage space. Stow away the second row and that increases to a huge 1,775 liters (62 cubic-foot). You could fit anything in there, including the kitchen sink. 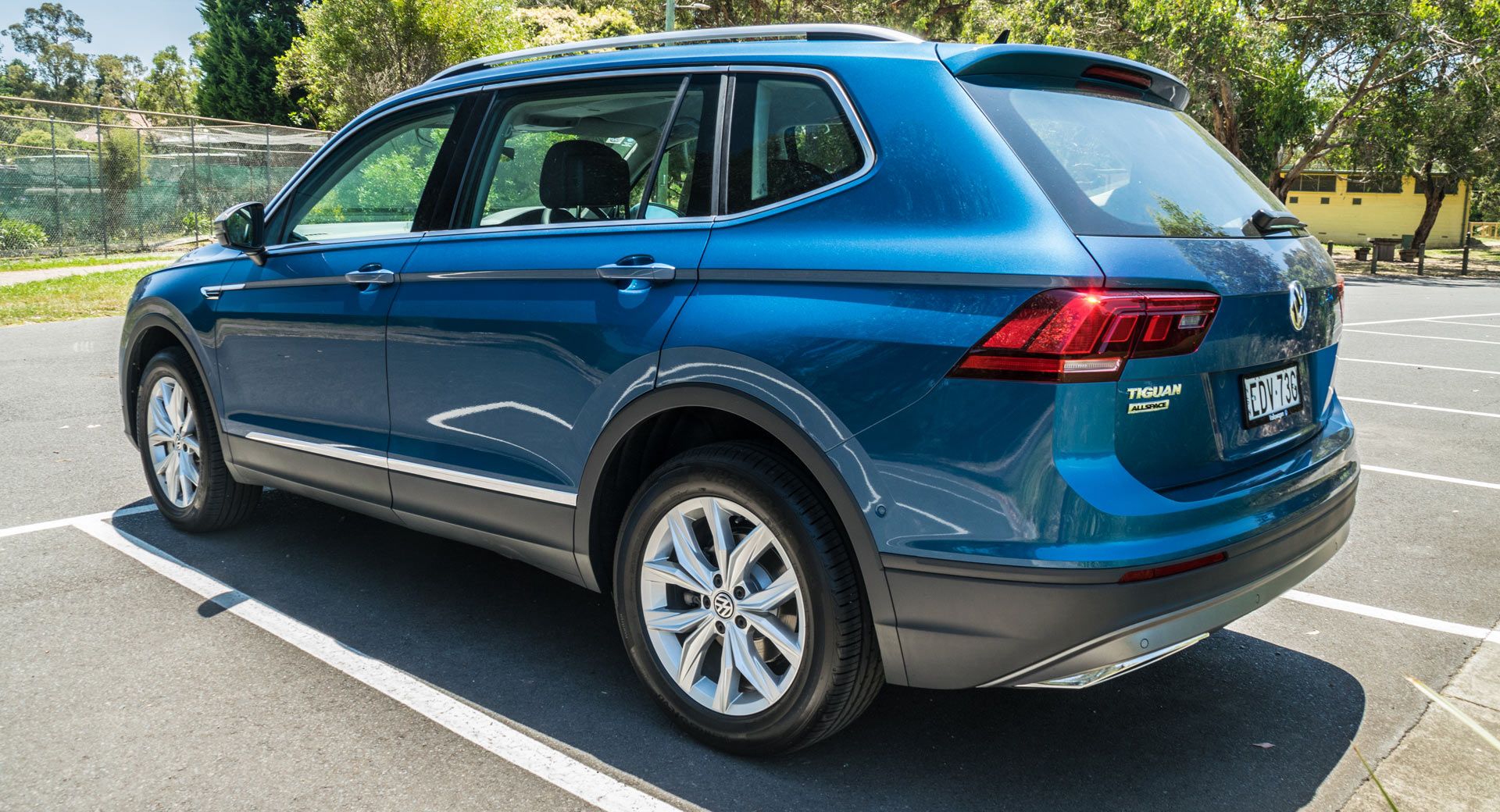 My test car came fitted with the available AU$1,600 (US$1,099) Driver Assistance Package that includes blind-spot monitoring, adaptive cruise control, traffic jam assist, and emergency assist. These features work alongside the lane keep assist and park assist functions that come as standard on all trim levels. Everything works well although the lane keep assist system did have difficulty keeping the car centered in its lane on the motorway, often bouncing between the line on the left and line on the right. I was rather fond of the blind-spot monitoring light being on the wing mirror cap itself as opposed to embedded in the glass light most cars. Something small but something nice. 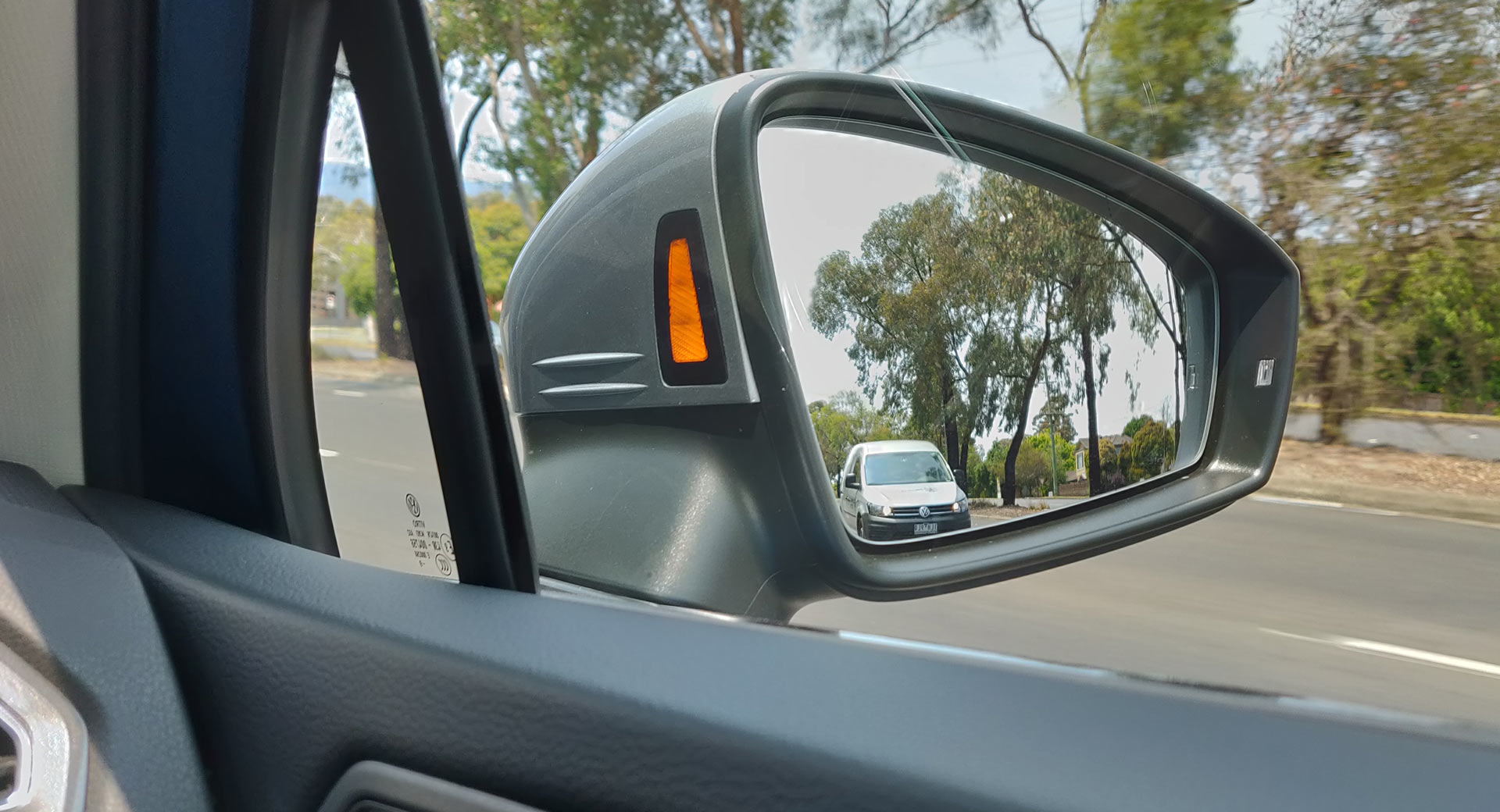 The SUV operates an intriguing spot in VW’s range Down Under as its only seven-seater. Not even the larger Touareg is available with seven seats locally. Unlike the Touareg, the Tiguan Allspace feels more about practicality and space than it does style, luxury, or comfort. Whether or not that’s a good thing depends on your preferences. If you have a growing family, it could be the perfect middle-ground. Just don’t expect to feel like a million bucks while driving it.