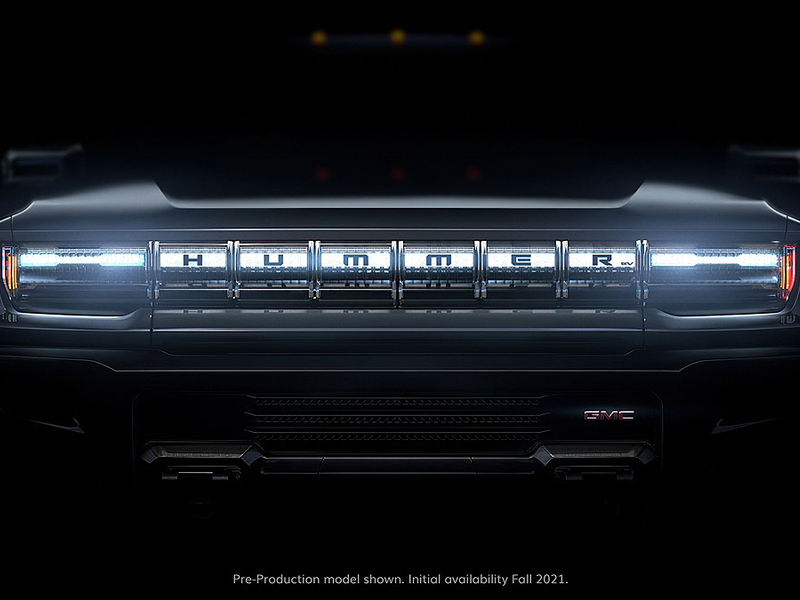 DETROIT — General Motors will give a partial glimpse of its first battery-electric pickup, the Hummer EV, in a commercial airing Sunday during the Super Bowl. But the automaker won’t show the full vehicle until May.

The commercial, which will include NBA star LeBron James, will mark GM’s plan to revive the Hummer name on an electric pickup. GM plans to build it at its Detroit-Hamtramck Assembly plant starting in 2021 and sell it under the GMC brand.

The pickup will have 1,000 hp and go from 0 to 60 mph in three seconds, GM said Thursday. GM engineers say the truck’s electric powertrain will have an estimated torque rating of 11,500 pound-feet.

Some media reports speculated that Hummer could be a brand of its own or a subbrand of GMC. But a GMC spokesman confirmed that the Hummer electric vehicle will be a nameplate within the brand, just like the GMC Sierra or Yukon.

In the 30-second spot, called “Quiet Revolution,” GM reveals the specs as the sound at the beginning of the scene mutes to reflect the silence of the Hummer EV, a clear departure from the rugged gas guzzlers that wore the Hummer badge a decade ago.

The only part of the pickup shown in the commercial is a new version of the traditional seven-slot Hummer grille. It’s illuminated with “Hummer” spelled out across the grille and a smaller GMC brand mark below it on the driver’s side. GMC will reveal the pickup May 20 in Las Vegas, the spokesman said.

The automaker previewed the Super Bowl spot by releasing four videos on Thursday that include scenes from the ad. None of them include James, but a GM representative confirmed to Ad Age that James would appear in the ad.

The automaker had planned to release the full ad this week, but opted to hold off in the wake of Kobe Bryant’s death Sunday in a helicopter crash. James was close to Bryant and considered him a brother. In an Instagram post following news of Bryant’s death in a helicopter crash on Sunday, James wrote that he was “heartbroken and devastated” by the news. “Out of respect for this week’s news and all those involved, we are holding the full ad until game day,” A GM spokeswoman told Ad Age, an affiliate of Automotive News.

GM discontinued the Hummer brand in 2010, shortly after its bankruptcy restructuring. Hummer sales in the U.S. peaked in 2006 at more than 71,000 vehicles before plummeting in subsequent years as gas prices surged.

GM also said this week that it will build the Cruise Origin, an autonomous electric shuttle for ride-hailing fleets, at the Detroit-Hamtramck plant. The automaker is investing $2.2 billion in the plant to build EVs and pledged $800 million in supplier tooling and other projects related to EV production.

Cruise Origin production is planned to start in late 2022, AutoForecast Solutions told Automotive News, but GM and its Cruise subsidiary have not confirmed production timing.

Forecasters also project that production of electric versions of the Sierra pickup and Cadillac Escalade SUV will begin at Detroit-Hamtramck in 2023.

No automaker has ever made a consumer vehicle with anywhere near the 11,500 pound-feet of torque that GM is claiming for the Hummer EV.

That would best the strongest pickup engine available today by more than 10 times; the 2020 Ford Super Duty diesel is rated at 1,050 pound-feet. A Bugatti Veyron supercar with its quad turbo V-16 engine makes 1,106 pound-feet of torque. The Rivian R1T electric pickup planned to begin production this year is rated at 829 pound-feet.

Torque is a measurement of twisting motion. It’s possible that GM’s claimed 11,500 pound-feet rating is accomplished with gearing and multiple motors and is only available at low speeds, such as when pulling a heavy boat out of the water or crawling at 2 to 3 mph over steep inclines.

GM isn’t saying whether that torque measurement is taken at the electric motor or at the wheels. Either way, it is sure to raise eyebrows at competitors and elsewhere. GM plans to reveal more this summer.

E.J. Schultz of Ad Age, an affiliate of Automotive News, contributed to this report.