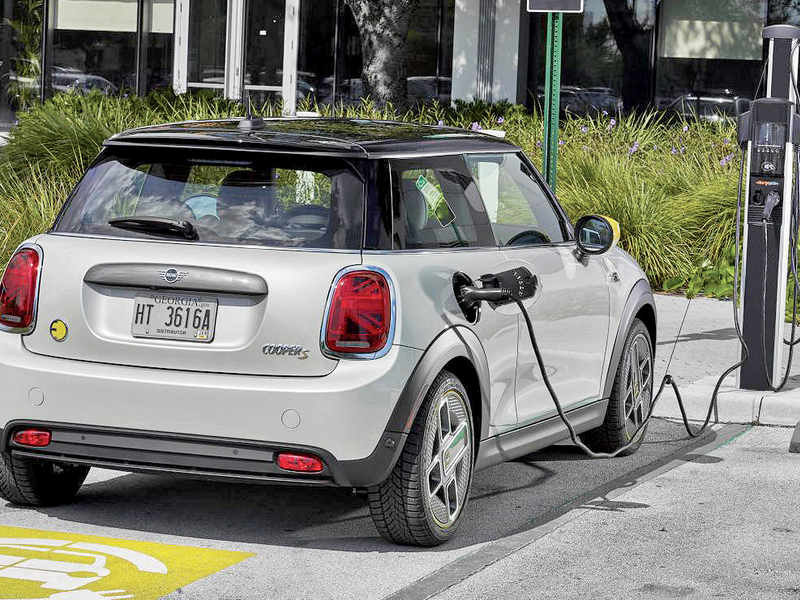 The Mini Cooper SE will start at $30,750, including shipping, when it lands in March. State and federal EV tax credits would knock the price down to as low as $18,750, depending on where the vehicle is sold.

Achieving that ambitious sticker price dictated many of the design and engineering decisions involved in developing the battery-powered product.

The company mandate was to make the SE look like and have the interior usability of the iconic Mini Hardtop two-door hatch, Christian Schmidt, head of subline electrification at Mini, told Automotive News during a press preview here.

“We were not heading for maximum differentiation from design,” Schmidt said. “You have the same trunk space, you have the same seating capacity, everything is unchanged in the inside.”

The exterior design also hews to that of the two-door Mini Hardtop, with a few tweaks to boost aerodynamics and meet crash-safety standards.

The body-in-white of the two models are nearly identical, except for the fueling/charge port, Schmidt said.

Since the battery-powered Cooper SE is nearly 320 pounds heavier than the combustion-engine-powered Hardtop, changes had to be made to the A-pillar and the door sill for safety reasons.

In the front, the SE trades an open grille for a mostly closed-off one. The undercarriage is mostly enclosed, and a diffuser in the rear helps direct airflow efficiently.

Meanwhile, a spoiler and redesigned side mirrors reduce wind resistance and help the SE achieve a 0.30 drag co-efficient.

The SE’s T-shaped, 12-module battery uses the same chemistry as the i3’s but is packaged differently, Schmidt said. That challenge was to optimize the battery setup so the Mini has a range that customers would find acceptable, he said.

Some argue that the SE’s modest 32.6-kWh battery that delivers an EPA-estimated range of about 110 miles might not be acceptable in a world of where 200-mile EV range is now table stakes.

“We wanted to avoid putting too much weight and too much cost into the car” with a larger battery, BMW Group sales boss Pieter Nota said last year, noting the new model’s range is “optimal” for in-town driving.

The SE’s motor and power electronics are packaged in a subassembly that fits in the same space as a conventional Mini’s engine and transaxle. The SE’s electric motor delivers 181 hp and can accelerate from 0 to 60 mph in 6.9 seconds.

To further limit production costs, engineers designed the electric drive so it could be mounted at “exactly the three spots where you would mount the combustion engine,” Schmidt said.

Mini said last November that the SE has received interest from more than 10,000 potential customers. Mini expects to sell about 2,000 units in the U.S. by the end of this year.

The new model is part of BMW Group’s ambitious plan to launch 25 electrified vehicles — more than half of which will be full electric — by 2023.

A second Mini EV is at least a couple years away and is expected to be on all-new platform.

The SE “represents everything a Mini should have — it’s very agile, it has a low center of gravity,” Schmidt said. “The instant torque is what you would expect from a Mini.”