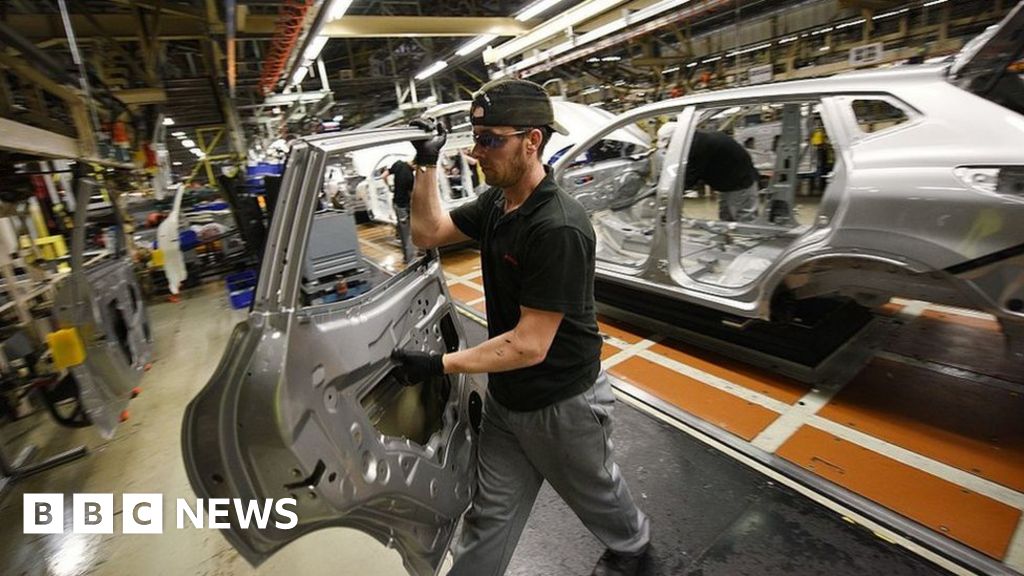 UK car production sank to its lowest in almost a decade in 2019, with output forecast to continue falling this year.

Factories produced 1.3 million units last year, down 14.2% on 2018 and the third consecutive year of decline, according to figures from the Society of Motor Manufacturing and Traders.

Structural changes in the industry, Brexit uncertainty, and weak exports were all factors, the trade body said.

Production of cars to be sold in the UK fell 12.3% last year, while vehicles for export fell 14.7%. With 81% of cars built for export – the vast majority sent to the European Union – Mr Hawes again stressed the importance of a barrier-free EU trade deal after Brexit.

Shipments to EU countries fell by 11.1% last year, but the bloc remains the industry’s most important market

“Given the uncertainty the sector has experienced, it is essential to protect our global competitiveness, and that starts with an ambitious free trade agreement with Europe – one that guarantees all automotive products can be bought and sold without tariffs or additional burdens,” he said.

Britain leaves the EU at 23:00 GMT on Friday, although trade rules will remain unchanged until the end of the transition period in December.

Mr Hawes does not anticipate any disruption to exports or imports, as the threat of a cliff-edge Brexit that spooked the industry last year has receded.

But given the integrated nature of the European motor industry, with parts, components and cars going back and forth across borders several times during the production process, a trade deal needed to be struck as soon as possible, he said.

“This will boost manufacturing, avoid costly price rises and maintain choice for UK consumers. Negotiations will be challenging but all sides stand to gain,” Mr Hawes said. He estimates that the imposition of tariffs on cars and components will add £1,500 to the price of an average car, currently about £22,700.

A satisfactory trade deal will unlock a pipeline of investment into the UK, by both manufactures and the supply chain, he said. Carlos Tavares, chief executive of France’s PSA Group, which owns Vauxhall, has stressed the importance of a trade deal to secure investment at the UK company’s Ellesmere Port factory, in Cheshire.

It’s dreadful news for car workers, but the fall in new cars sales may be good for the environment.

It may also provoke a deeper debate about the role of the car in society.

Perhaps people are putting off buying a car until they see how Brexit works out, or because they’re uncertain how electric car charging will progress.

But other changes are underway – such as the move away from car ownership among young people.

In the 1990s, 80% of people were driving by 30; now this marker is only reached by 45. And men under 30 are travelling only half the miles their fathers did.

Some young people can’t afford cars. Others worry about the environment, and take public transport or perhaps hire a car when they need one.

Yet still the government predicts a growth in traffic, and is planning £28.8bn spending on roads.

The independent Commission on Travel Demand says this should lead to a government re-think about travel priorities.

Manufacturing output this year is forecast to fall less sharply, to about 1.27 million units, with companies having already started adjusting to structural changes, such as the slump in diesel cars, new emissions regulations, and investment in electric and hybrid cars.

Mr Hawes said a bright spot in last year’s figures was a 34.7% rise in production of electric and hybrid vehicles. But with 192,304 units produced, it was a small part of the overall total. “The challenge to the industry is how quickly it can move,” Mr Hawes said. “Environmental pressures are not going away. They are going to increase.”

Alongside the production data, the SMMT released new figures highlighting the motor industry’s contribution to the UK economy. About 168,000 people – one in 14 – employed in manufacturing works in automotive, with an additional 279,000 jobs supported by the sector.

In the north east and west Midlands, automotive accounts for more than one in six manufacturing jobs.