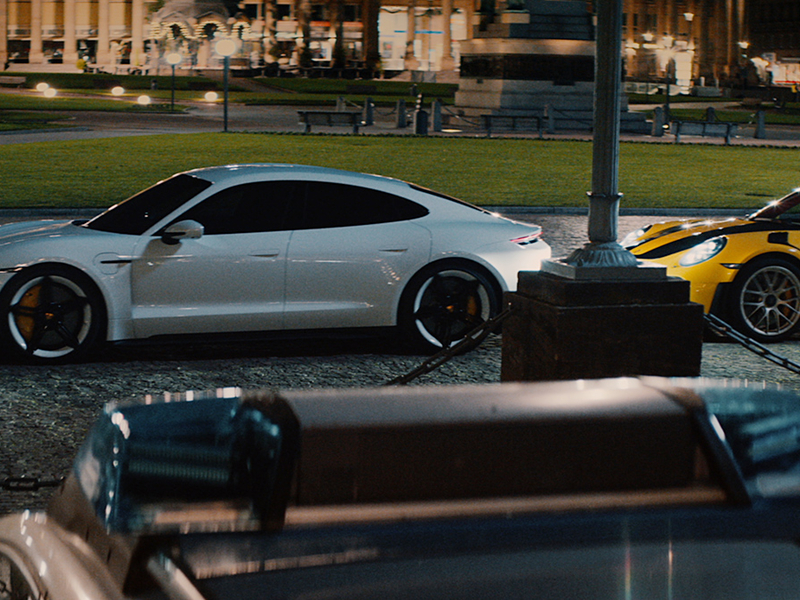 Porsche doesn’t want the Taycan, the brand’s first battery electric vehicle, to be an outsider that’s disconnected from the manufacturer’s storied heritage.

So Porsche’s first Super Bowl ad since 1997 had to do double duty. In addition to serving as an energetic declaration of the brand’s foray into all-electric power, the ad sought to link the Taycan to Porsche’s family tree.

This motivation turned “The Heist” into an up-tempo exhibit of Porsche performance through the years that shows the Taycan tearing up German roads with its cousins. Museum security guards in the spot have to track down a “stolen” Taycan while driving an array of Porsche models.

While the Taycan adds a new electric strand to Porsche’s DNA, the agile sedan is just another member of the family, said Klaus Zellmer, CEO of Porsche Cars North America.

“We didn’t want the Taycan to stick out that much,” Zellmer told Automotive News. “We just wanted to make sure people understand that it’s a family member within family members like a 917 K, like a 918 Spyder, like a Carrera GT, like a 911, the current generation. It blends in and it fits perfectly into that lineup. That’s what we wanted to do. Yeah, and it happens to be electric.”

The ad, handled by agency Cramer-Krasselt, was shot in Germany in November in locations including Heidelberg, Heppenheim, the Black Forest and Stuttgart-Zuffenhausen. Zellmer said the automaker fielded story proposals from several agencies.

Porsche released an extended version of the spot on YouTube on Jan. 24 that has already garnered more than 13 million views. Zellmer said he’s been perusing the comments section to see what the public has to say.

“With all the cars that were involved, all the permitting that you have to go through, the weather risk in November. This was something that made us nervous, made us tense,” Zellmer said. “But I think looking at the results now and the immediate resonance that we can see already before the big game confirms that, sometimes, it’s worth being bold.”

Porsche turned to its history to provide some comic relief in the spot. One of the security guards gets stuck riding a Porsche tractor, a less than speedy piece of the brand’s past.

More than 125,000 Porsche tractors were produced from 1956 to 1963, with many of them still in use to this day, according to the company. The 1959 Porsche-Diesel Standard 218 tractor got a chance to shine in the spot.

Zellmer said the inclusion of the tractor was a source of debate because there were doubts about whether people actually knew about this chapter in Porsche history.

“It’s nice to leave a few things in there that are not immediately self explanatory, that raise questions where people start engaging with your brand and say, ‘Why is that?’ And then they probably read up about it,” Zellmer said.

“Porsche had to decide on whether we would carry on producing tractors, or change over to producing sports cars, and I’m more than happy to say we made the right decision.”

For viewers who aren’t aware of the Taycan’s electric credentials, they may not realize it’s an EV until the end, when the ad closes with the message: “Finally, an electric car that steals you.” Zellmer said people will have to listen carefully to the sound the Taycan makes.

“It is something that you will have to discover, like many other things you can discover in the spot. It’s playful, and we want to encourage people to watch the spot, not only one time, [but] a couple of times to discover even more things.” Zellmer said.