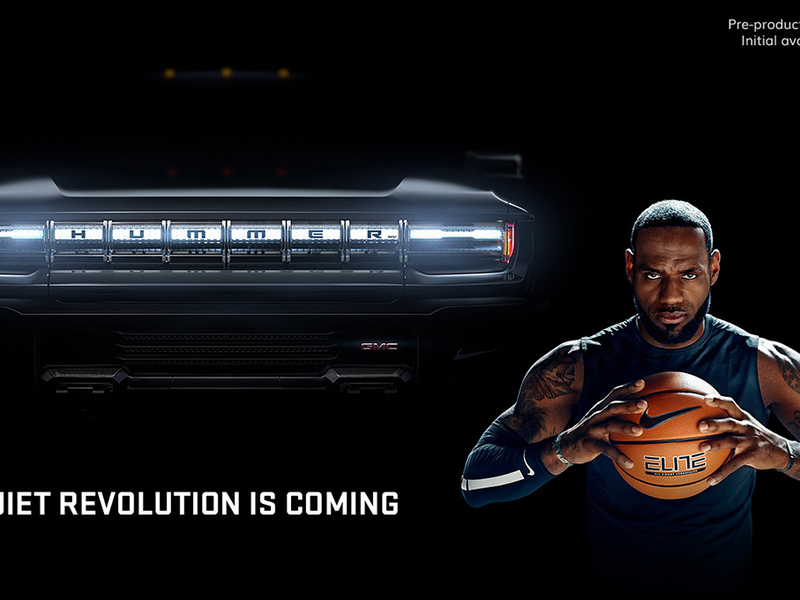 Phil Brook, GMC’s vice president of marketing, says the numbers speak for themselves in the ad, which features the Los Angeles Lakers superstar. The 30-second “Quiet Revolution” Super Bowl spot touts how the pickup’s expected 11,500 lb-feet of torque and 1,000 hp will be delivered in a hushed fashion thanks to its electric foundation. The ad is slated to air in the second quarter.

Brook expects the presence of James, who will endorse the Hummer EV moving forward, to only amplify the ad’s reach.

Brook spoke with Automotive News reporter Vince Bond Jr. about how the automaker found the right message for the spot, why James was selected and how consumers will react to an electric Hummer that’s a complete turnaround from its gas-guzzling predecessor.

Q: When did you first decide that Hummer would be featured in this spot?

Was the commercial shot this year?

It was shot as soon as we turned into the new year, yes.

How did this idea of the “Quiet Revolution” come about? What was your inspiration?

We’ve spent a lot of time around the vehicle, thinking about the vehicle, and when you combine the performance numbers that it’s capable of, it feels like it should be a big, noisy, in your face kind of a product. But the reality is because of the fact that it’s all electric, it’s near silent.

We thought that was an interesting idea. The other part of it is that when someone buys one of these and owns one, they won’t need to be out there bragging about how good this thing is. The numbers are going to do the talking for them. That was kind of the thinking behind the “Quiet Revolution” idea.

How will consumers respond to an electric Hummer? It’s so different from the previous generation.

We think they’re going to love it. Because the Hummer EV has incredible capability with zero emission, it really is the best of both worlds. Any association with the brand is fairly distant. This is a different kind of vehicle for a different time and a different generation. It really does announce that GMC is very serious about the electric space and we’re getting into it in a big way. It’s really a big statement.

Was it difficult to find the right message for this commercial?

It was it was surprisingly easy. The numbers really do the talking for the vehicle and that’s where this “Quiet Revolution” came from. And the fact that the vehicle is so different from anything else we’ve done before because it’s all electric and it’s near silent when it’s in operation, so we thought that was just a really nice idea. When we started from there, bringing that to life was a lot easier than I thought it was going to be, and it happened in a very short period of time. A huge amount of work has happened in a relatively short period of time to pull together something that we’re incredibly proud of.

Was LeBron the first choice?

Absolutely. A very easy fit, a very organic fit for GMC and LeBron. This vehicle and LeBron have something in common in that they’re game changers. He’s really changed the game of basketball, putting a stamp on it. At the same time, that’s what we think this vehicle is going to do for the truck market. So we think this is a really, really strong fit there.

Was it difficult to get him to sign up?

No, it was a very good fit at both ends. It happened very quickly. It’s been a very good relationship. A couple things I would say about LeBron. Not only is he a great sportsman, he is a great person and that’s what we were really attracted to. He’s great family man, he does a lot of work in the community and that’s really important to him and it’s really important to us. And the fact that he has over 50 million Instagram followers and 44 million Twitter followers, he’s not just the typical celebrity or influencer. He’s almost a media channel in himself. That’s why we thought it was a really good idea and a really good fit for around GMC.

That that would be the plan moving forward. He’s excited about the project, he wants to get the word out. So featuring in the television commercial, he’ll feature in some other digital executions that we’ve pulled together. We’ve got some other plans about things we’ll do in the future with him as well and, yeah, he would share his thoughts and some of the work on his channels as well.

It had to be hard to film this during the season. He’s quite busy.

He is. It all came together fairly quickly and fairly organically and fairly easy, to be honest. The good thing is he’s based in L.A. a lot of the time. A lot of the best people in the ad business are based in L.A., too. So for us to get a world-class director and cinematographer quickly in the same place as LeBron worked out. He is busy and we were very conscious of that, but he’s been a great partner so far, so we couldn’t be happier.

This is the beginning of a multiyear relationship with LeBron? We will see him in more GMC commercials?

Are there any concerns that LeBron might overshadow the vehicle on Sunday?

I don’t think so. The numbers really speak for themselves. He’s important to the communication. In conjunction with what we’re saying about the car, I think the balance is exactly right. I’m not concerned about him overshadowing. In fact, I think his presence and influence are really going to amplify the message.