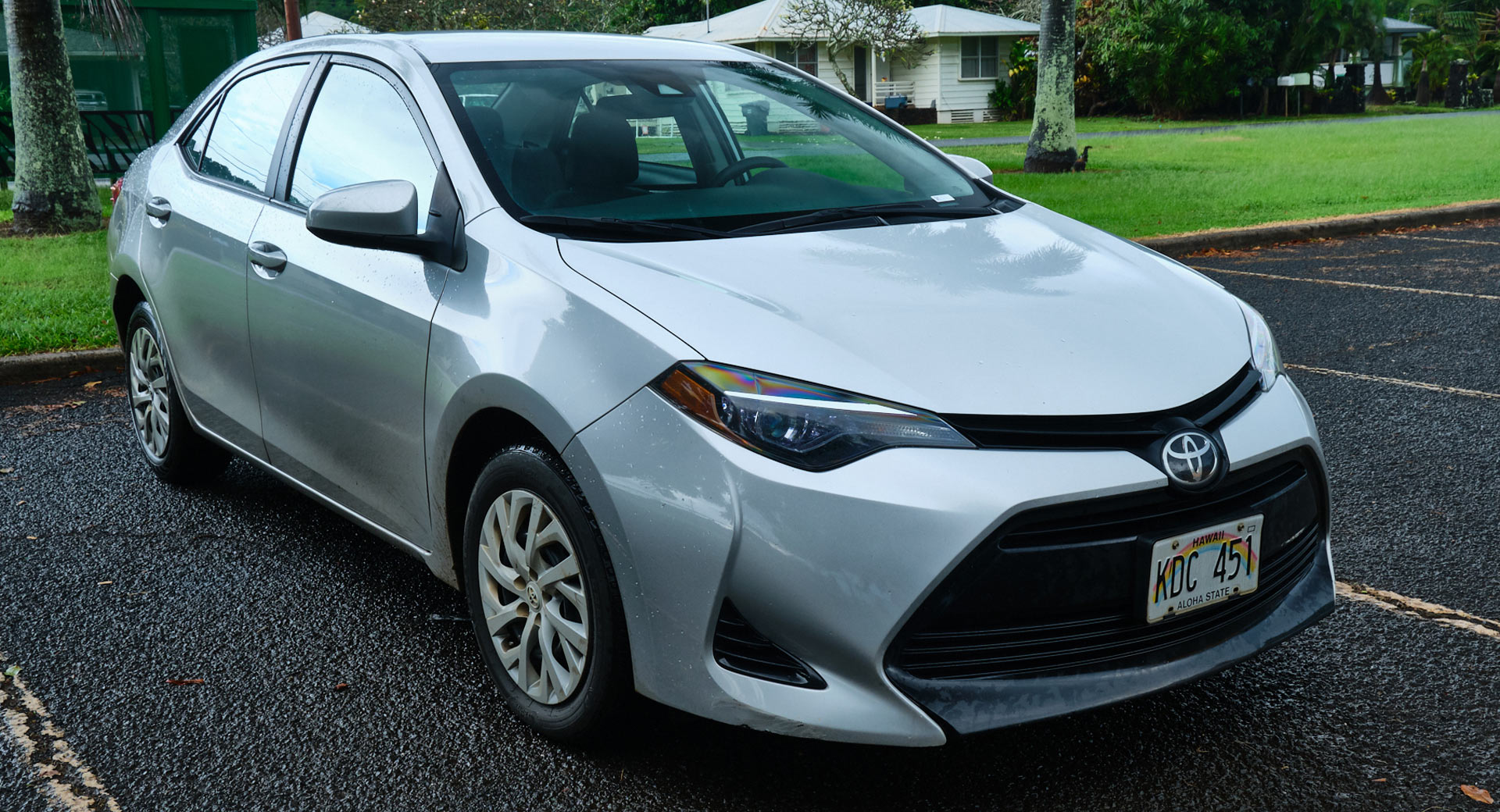 Yes, we know. The 2019 Toyota Corolla LE was replaced by an all-new generation car roughly 12 months ago. But, during a recent trip to Hawaii, we spent a week with the old Corolla LE sedan and set out to see how it compares to the new car and whether or not it’s worth considering for used car buyers.

For the years the eleventh-generation Toyota Corolla sedan was on sale in the United States, it was available in no less than five main trim levels dubbed L, LE, SE, XLE, and XSE and one efficiency-focused variant dubbed the LE Eco.

All models, with the exception of the LE Eco, utilize a 1.8-liter 2ZR-FE four-cylinder engine with 132 hp and 127.5 lb-ft (173 Nm) of torque. By comparison, the LE Eco has a unique version of this engine that features a Valvemetic system to up power to 140 hp and 126 lb-ft (171 Nm), all while consuming 5-10 per cent less fuel than the standard 2ZR-FE engine. Coupled to the engine of our tester was a continuously variable transmission (CVT) although a six-speed manual was also offered from the factory. Front-wheel drive is the only configuration available.

During our testing, we hustled the Corolla LE around the stunning island of Kauai, also known as ‘The Garden Isle’ because of the gorgeous rainforests and sharp cliffs that dominate much of the landscape. There are no big, multi-lane highways on Kauai so we never had the opportunity to test the car at consistent motorway speeds, spending most of the time driving between 25 mph and 50 mph (40-80 km/h) and along some gorgeous mountain roads. 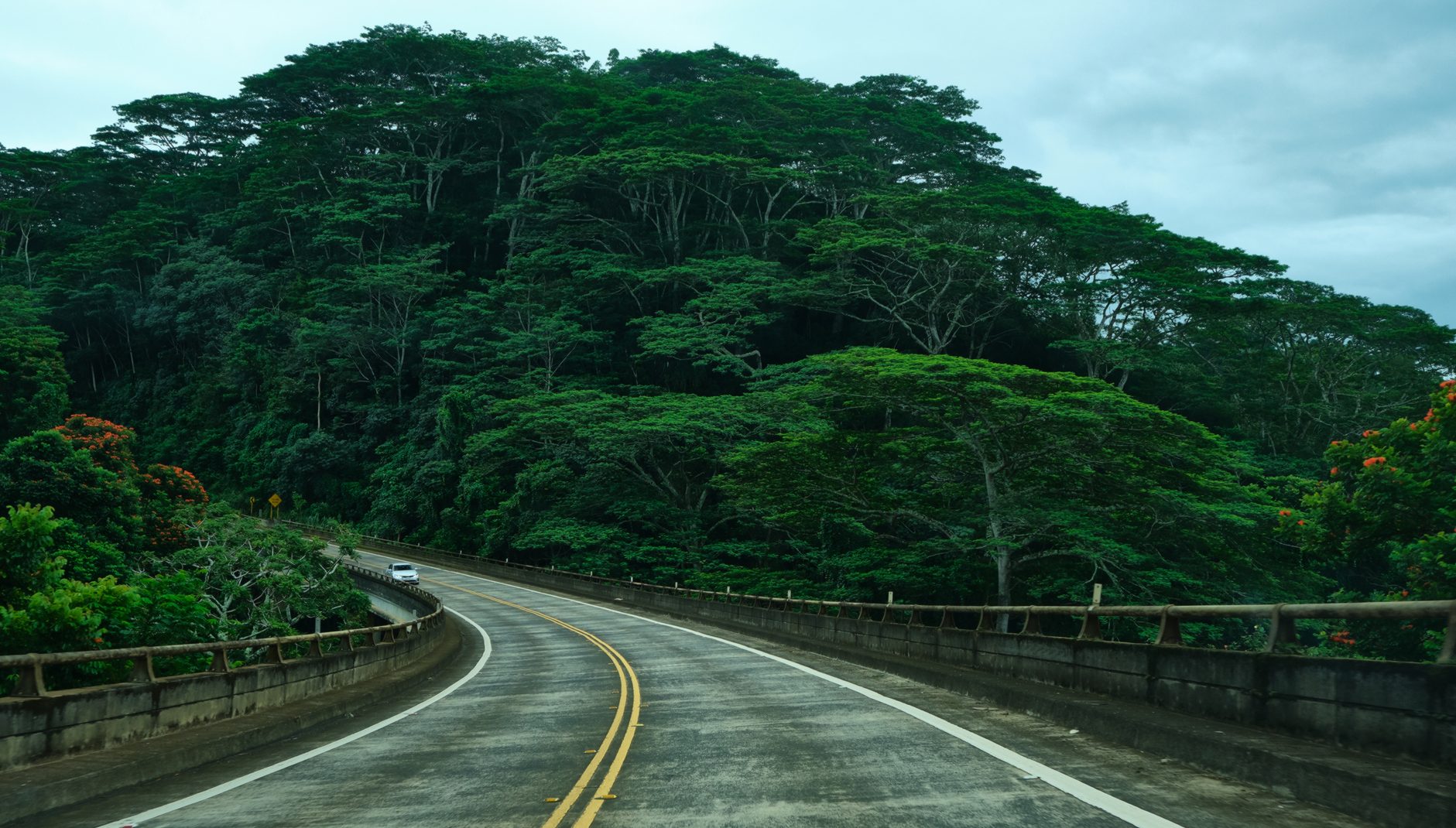 The powertrain combination is, for the most part, trouble-free and does the job of getting you from Point A to Point B with little fuss. The steering is light and the throttle and brake pedals are soft and progressive to use. We’ve heard complaints about the CVT used by Toyota but didn’t encounter any glaring issues with it. CVTs could be considered as the transmission of the devil but Toyota arguably offers the best on the market and for a car like the Corolla, it works well enough despite a bit of unwanted drone at times. Acceleration is reasonable and adequate for everyday commuting as well as the odd overtake .

Driven: 2020 Toyota Corolla Wants To Shake Its Boring Image, Does It Succeed?

EPA figures list the Corolla LE returning 28 mpg in the city and 35 mpg on the highway. We saw figures in the high 20s for most of the time driving the car and have no doubt that hitting the mid-30s would be achievable on long highway stints. 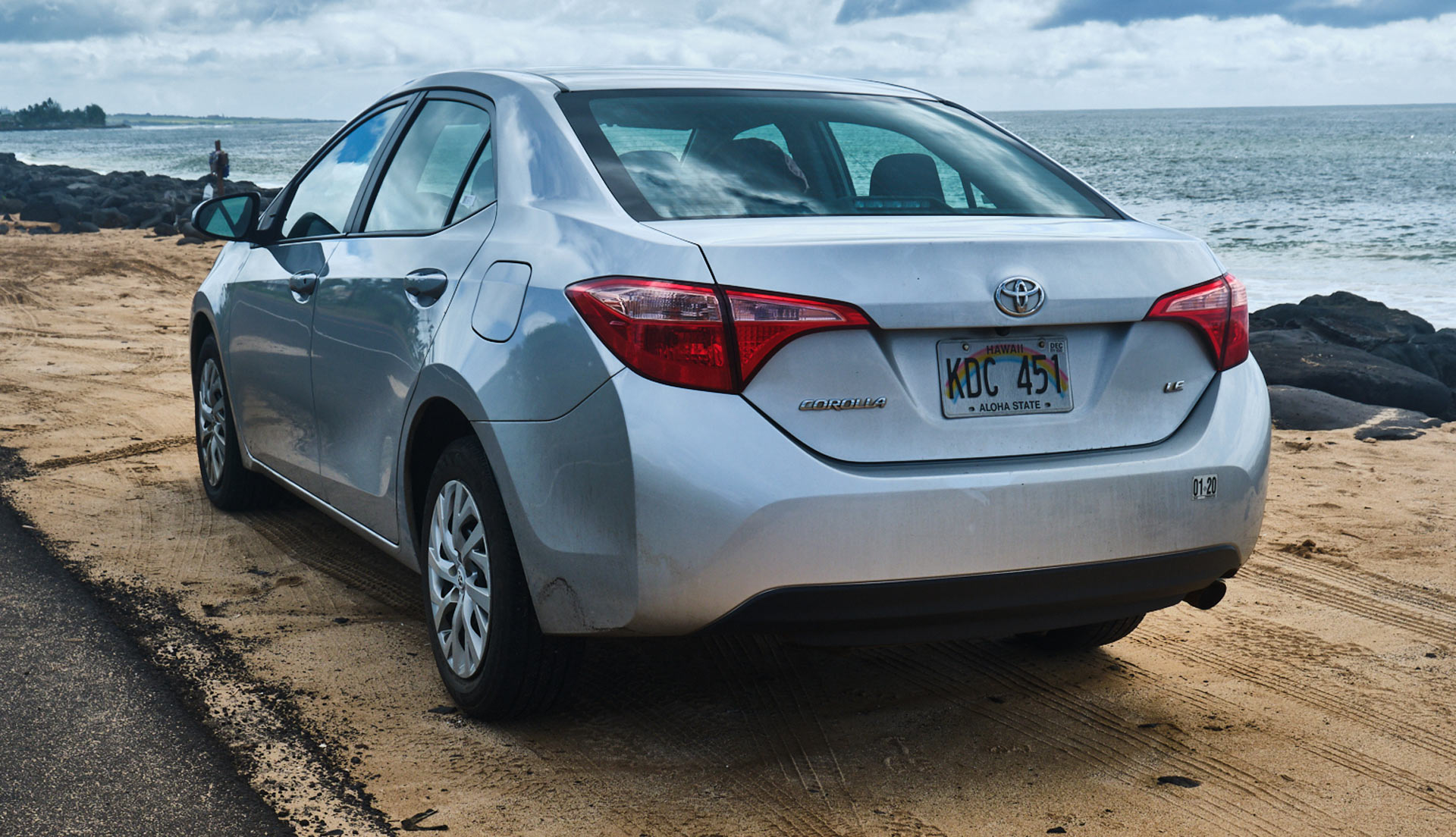 At the time the eleventh-generation Toyota Corolla was introduced, it was modern enough for the masses, especially compared to the softer Corolla models sold in markets around the world. However, compared to the twelfth-generation model, it has started to look quite dated.

The front is dominated by a set of sharp headlights and a large front grille finished in gloss black. Our test car was in silver and lacked a sunroof that some models came equipped with. The car is 183.1-inches long (4,650 mm), 69.9-inches wide (1,775 mm), 57.3-inches high (1,455 mm), and supports a 106.3-inch (2,700 mm) wheelbase. These figures translate into a vehicle that offers surprisingly good interior space and enough room to seat five adults (as long as those at the rear are quite small). Luggage space isn’t huge and capped at 13 cubic-feet (368 liters). That’s still enough to swallow up some decently-sized bags and suitcases, however. 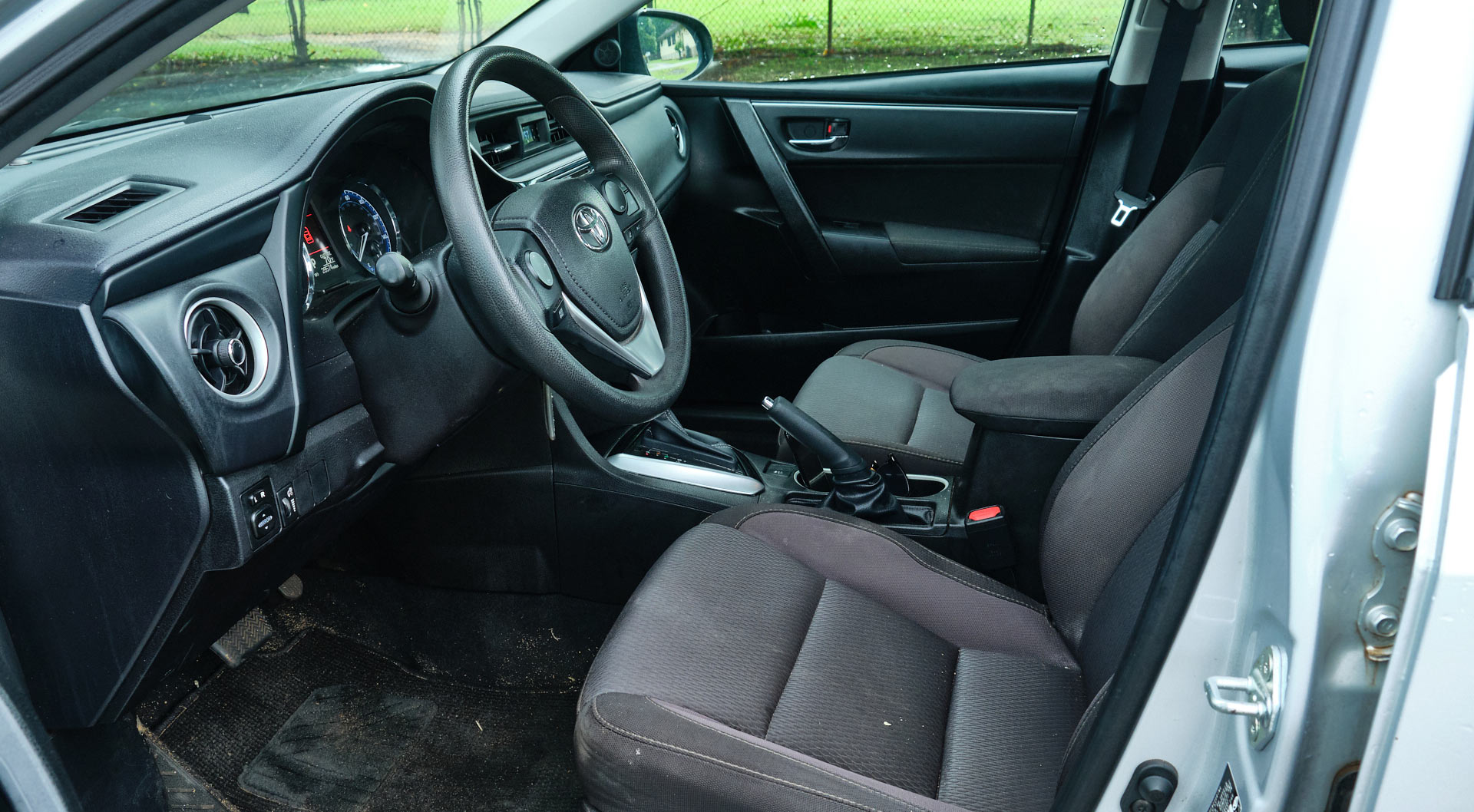 Inside, you sit quite high in the car and are confronted by a series of hard plastics and a three-spoke steering wheel with crude buttons. A small 6.0-inch infotainment system is featured and offers Bluetooth connectivity. The infotainment software will be familiar to anyone who has driven a recent Toyota model and feels very behind the times, even compared to the infotainment used by the 2020 model year Corolla. The touch display itself is also prone to sun glare and isn’t particularly bright. Welcome touches include a USB socket and a pair of large cupholders. Beyond that, there’s not much to report on as this is a lower-spec model lacking some of the features of higher-end variants. 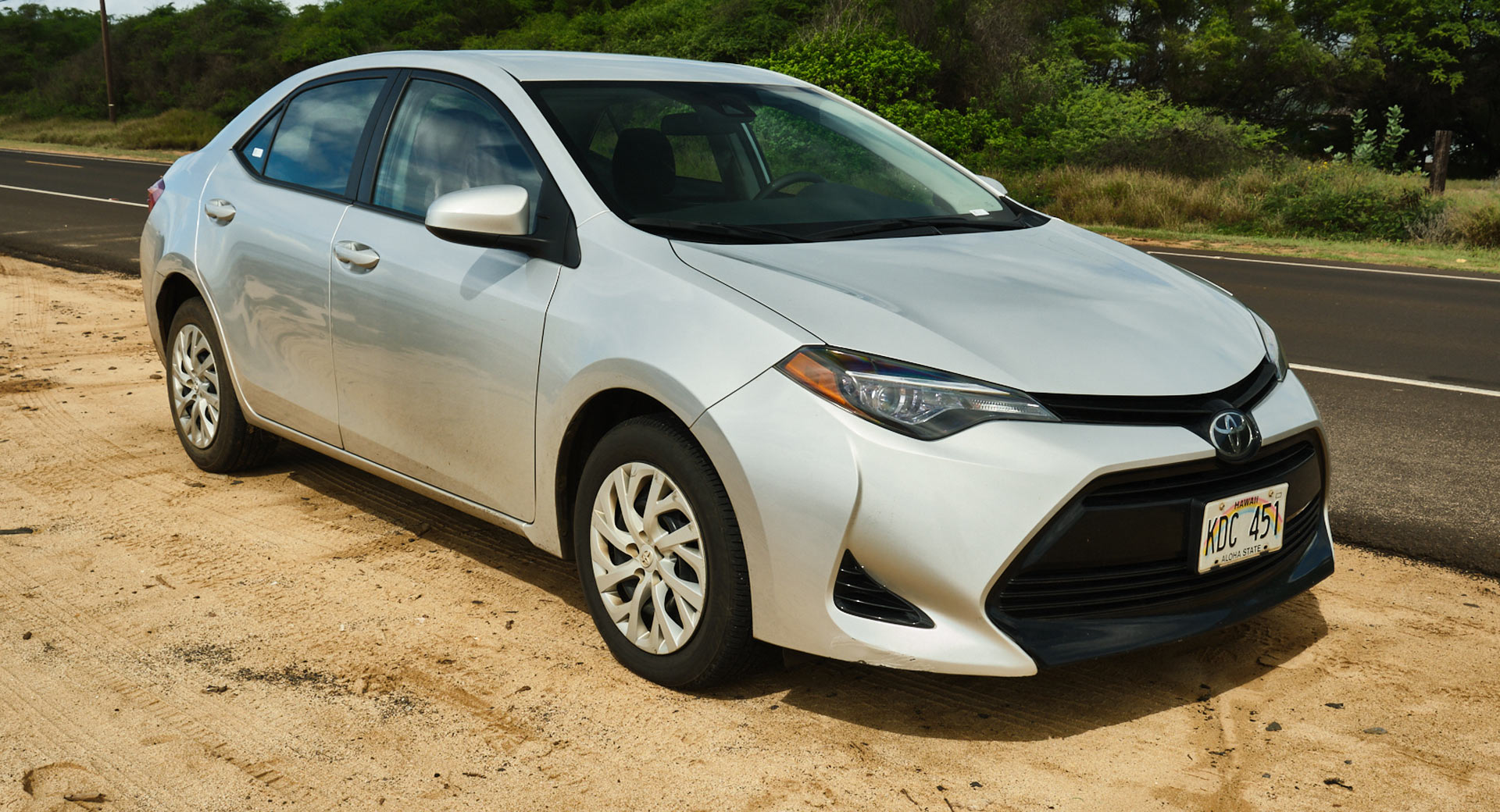 The Corolla LE I tested was sold new with a $19,135 price tag but depending on the condition, location, and mileage of the vehicle, used examples are easy to find throughout mainland U.S. for between $9,000 and $12,000. When you consider that a 2020 Corolla sedan starts at $19,500, buying a lightly used example that’s just a couple years old is something we think many young buyers should give serious thought to.

Sure, it may not look quite a nice as the new one but we’d argue it’s a little more appealing than the slightly older ninth-generation Honda Civic. Those looking for a used Corolla like the 2019 LE sedan can also rest easy knowing that as long as they’re able to find an example that hasn’t done all that many miles, perhaps under 30,000, the car should remain reliable and trouble-free for years to come.