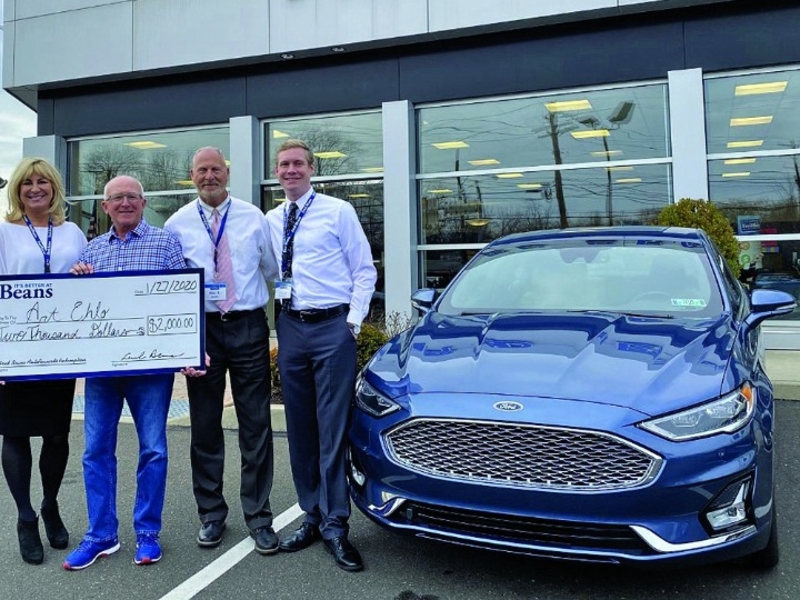 A customer rewards program in place since 2003 has motivated tens of thousands of car-buying customers to return to the group’s dealerships and put more than $11.6 million in earned rewards toward down payments on vehicles.

Membership in Fred Beans’ AutoRewards program — in place at the group’s 20 dealerships in Pennsylvania and New Jersey — has grown to more than 323,000 members who have earned nearly $35 million worth of points since the program’s inception, according to company officials.

“The program works because customers know those points go to waste if they buy a car from other dealerships,” said Beth Beans Gilbert, vice president of the group, headquartered in Doylestown, Pa. “It’s a great way to marry customers to the dealerships.”

The program has mushroomed well beyond its original scope, rewarding and engaging customers on many levels. It keeps them returning to service lanes and showroom floors, said Beans Gilbert, the daughter of Fred Beans, company founder and CEO.

Nucar Consulting created and administers the points-based program. Each point is worth $1. Customers earn 25 points for signing up, another 25 as a customer-appreciation gesture, 25 more if they attend a new-customer workshop, 25 for the first use of their membership card or smartphone app and 100 points for friend and family referrals. They also earn points on 15 percent of what they spend on almost all vehicle parts and service work, plus items such as tires and wipers.

Customers swipe their card or use the app to receive points; downloading the app nets 20 points.

Customers can check point totals on the retailer’s website or via the app, Beans Gilbert says.

Perks include one free oil change as well as $25 gift certificates when customers hit 350-, 500-, 750- and 1,000-point levels. The certificates can be redeemed for service work, but no points are subtracted from account balances. Customers also receive free annual car-safety inspections, required by the state, for as long as they own their vehicles. Such an inspection typically costs $25 or more, Beans Gilbert said.

Moreover, customers can apply up to $250 in points toward insurance deductibles for collision repairs at one of the group’s six franchised CARSTAR body shops.

Rewards members can even redeem points for cash, donate them to charities or transfer them to friends and family. Points expire five years from when they’re earned.

For the past 10 years, for example, customers have been able to double their available points for redemption in December and use them as a down payment on a vehicle purchase, giving the group’s year-end sales a boost. Last December, Fred Beans sold 3,054 vehicles — a one-month company record. Out of those sales, 1,035 customers redeemed points, Beans Gilbert said.

“Recently, a customer who was sitting in front of us at my daughter’s basketball game told me he’d just bought his ninth car from Fred Bean in December,” she said. “He had earned 1,000 points, which gave him $2,000 to put down on a car. He said it was like getting free money.”

Stories of sustained loyalty to the group are common. Customer Art Ehlo applied $2,000 in points to his down payment on a 2019 Ford Fusion. It’s the 18th car he’s purchased from Fred Beans since the 1980s.

When customers redeem points, dealerships get reimbursed from a reserve account. The stores fund that account by contributing $100 for each vehicle sale and a percentage of customer-pay service work. The dealerships contribute another $50 for each car to cover Nucar’s fees and the free oil changes.

Sales commissions are based on the full price of the sale, not the price minus the points redeemed.

“Since no one’s commission gets penalized, salespeople stay motivated to keep talking up the program with customers,” Beans Gilbert said.

“We recently took 450 customers to see a Star Wars movie,” Beans Gilbert said. “There’s nothing more gratifying than renting out a theater and having customers come over and hug me and my dad.”

The company last summer celebrated the redemption of the 10-millionth point. The prize? A year’s worth of car payments. Customers who redeemed points in August — 546 in all — qualified for a drawing. The winner was a teacher who’d purchased two cars from a Fred Beans dealership last year.

A rewards program takes time to gain traction because of the length of car-buying cycles, Beans Gilbert noted. And the rewards must be meaningful enough to interest customers.

But in the end, loyalty programs are worth the effort because it’s easier to sell a car to an existing loyal customer than to someone new.

“My dad always says you want people to be apostles and disciples for the business, and that’s what this program does,” she said. “The three most important words you can hear from a customer are, ‘I’ll be back.’ And this program helps ensure that.”