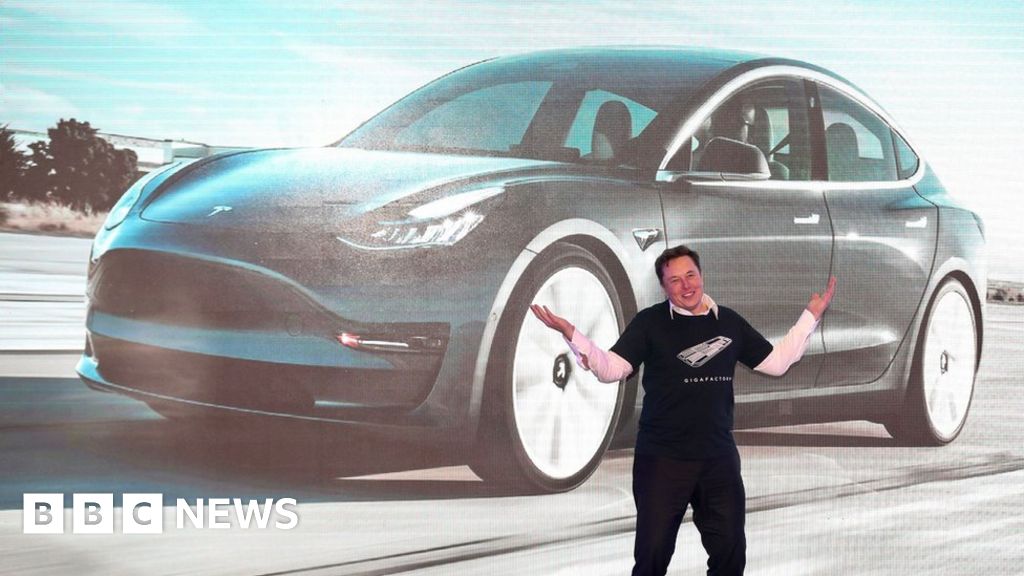 The jump means the firm’s share price has more than tripled in the last three months, outpacing the predictions of even some of the most optimistic analysts tracking the company.

It now ranks as the world’s second most valuable car company. So what’s behind the turnaround?

Less than two years ago, things weren’t looking quite as rosy for the carmaker.

The firm, which has reported losses every year since its start, faced a cash crunch amid production delays and heavy spending.

Doubts about performance also dogged chief executive Elon Musk, who had a reputation for making promises but failing to deliver.

Tesla’s numbers have since improved. The firm has now reported two quarters of profit and its new factory in Shanghai was up and running more quickly than expected.

Signs also suggest buyer demand has remained healthy, despite fears of a slowdown. Its new Cybertruck drew in about 200,000 orders, even after an embarrassing incident where its “tough” windows smashed during an on-stage demonstration.

The firm has also avoided self-inflicted mistakes, like the tweets from Mr Musk in 2018, which drew allegations of price manipulation, forcing him to step down as chair of the company.

“It has become very clear to investors that Tesla has a number of long-term sustainable growth drivers that are very difficult to dispute,” says Rolf Bulk, an analyst at New Street Research.

Wolfe Research analysts also said they were “a little surprised by the magnitude” of the share price increase but “the abundance of positives explains the move”.

In a note to clients last week, they wrote: “There may be ups and downs, but our view is the stock has found a new range.”

Are these prices sustainable?

Rolf Bulk believes that the recent share price increase suggests that some investors betting against the firm have been squeezed. Or forced to “close out positions”, a process that involves buying shares, which drives up prices.

But S3 Partners, which tracks such activity, said its research shows that recent buying has mostly been done by a mix of everyday investors and big firms.

Tesla’s stock has however been subject to big swings historically.

Some analysts said prices could dive again, especially given the investment it is making in a new factory in Europe and the fact that the outbreak of coronavirus has forced its Shanghai factory to shut down temporarily.

The prospect of a weak first quarter is “something that is not fully appreciated by Wall Street today,” Mr Bulk added.

What about other carmakers?

Its deliveries remain far smaller than its rivals.

Volkswagen delivered almost 11 million vehicles last year, while Toyota – which has a market value of more than $230bn – sold more than nine million in the first 11 months of 2019.

However, experts say Tesla’s electric car technology continues to lead the industry. The firm might be able to sustain that lead for longer than they had expected, even as demand for electric vehicles grows.

There is even speculation that the company’s investment in battery power could put it in a position to be a supplier to other leading automotive companies.

In a recent note to clients Adam Jonas, an analyst at Morgan Stanley, said if Tesla could achieve all those outcomes, it might be worth about where it is trading today.

He added that that was “an aggressive ‘blue sky’ scenario that could take 10 to 20 years to achieve, if it could even be done at all”.

I was going to wait to get an EV, but the time to switch is now
Toyota joins Redwood Materials’ battery recycling initiative
Connected vehicles are a smart opportunity for mobility data
Driven: The 2022 Honda HR-V e:HEV Is A Premium-Looking But Pricey SUV
2023 Honda HR-V