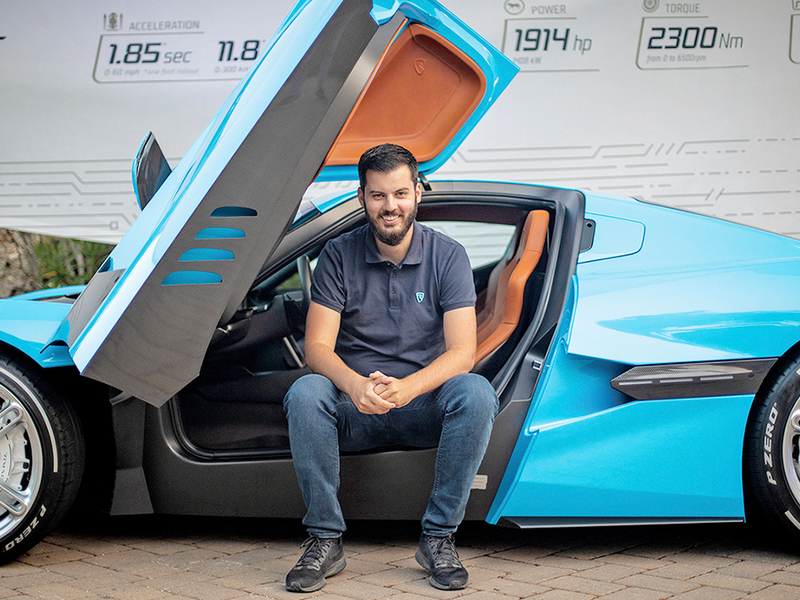 Q: Do you collaborate with automakers because you want to make supercars— Or are supercars your way of advertising your technology to those companies?

A: We started collaborating out of necessity to keep the company alive. But now I enjoy playing a role in shaping the future of the car industry. I was born a car guy. But we can have a bigger impact by collaborating with these big companies and helping them make electric and hybrid cars.

Has it been a smooth success so far?

We have been on the brink constantly. Our odds of survival were probably in the single-digit zone most of the time. And what are they now — 30 percent to 40 percent?

But how have you succeeded?

Maybe because I didn’t do anything else. I was 19 when I started. If you ask a guy from BMW, he will tell you it takes €50 million to develop a light. I went to Hella and asked if they could make a light for my car, and they laughed at me. We had to do things in a different way because I knew I couldn’t pay anybody to do it for us. As a result, we created the value ourselves, so we could sell the components and know-how to other car companies.

Do you have more electrification expertise than the global automakers?

No, we are just focused on a specific area, which is high-performance powertrains. The others have to worry about other things. They have to worry about unions and giving their staff work. These are different problems than the ones we have. We are not smarter.

Could you build your own range of cars?

We don’t want to go to a higher volume with our cars for several reasons. One of them is that we don’t want to compete with our customers. As long as we are below 100 cars a year, they don’t care. Second, I truly believe mobility will change completely. It doesn’t make sense today to start a company to sell mass-produced vehicles because I’m convinced people will not own cars and people will not drive cars in the future.

Yes, we are developing batteries and powertrains for higher volumes, and allowing automakers to make their own electric and hybrid cars. But we are thinking of ways to go beyond that.

Porsche now has a 15.5 percent stake in Rimac. It has a lot of experience of its own in high-performance batteries from its LMP1 racing program. What did you offer that they didn’t have?

That was a question that a lot of people inside Porsche were asking as well. “Why do we need a little Croatian company? We are Porsche.” When they went through the supplier quality audit, they asked: “Do you do this? Do you do that?” I was like, “Guys, if we had all of this, we would be exactly the same as you. So why would you invest in us?” A small, young company like us doesn’t have all of the processes of a big car company. We are different because we do things differently.

How did you change minds at Porsche?

They gave us a challenge at the beginning: “This is a new car that we are developing. Make it better. You have three months.” Basically, they gave us an impossible task.

Was that car the Taycan?

No. I can’t say what it was. However, we managed to surprise them with the timing and the performance of what we did.

We are not better than them, we are different. We are helping each other. It is such a huge challenge to transition from combustion to hybrid and electric because there is so much to do. They can’t do it on their own. They will take any help they can get.

And what will you get from Porsche?

We hope they will help us go from being this little company specializing in technology, prototyping and small-volume manufacturing to a serious manufacturer of components. A Tier 1 supplier, basically.

Do you have a factory that can build components at the volumes that Porsche or Hyundai want?

We have that for prototypes, and we are on the brink of having it for production cars. But it is a huge step. I don’t think there is another company that started in a garage and within 10 years became a supplier to the big car companies of one of the most important components. We’re not talking about a plastic cover or something. We’re talking about critical things such as batteries and powertrains, which have the highest value in the car, which give the car its DNA. Companies almost always built the engines on their own. Now, with EVs, it’s the motor, inverter, gearbox and the battery.

What is the breakdown of ownership of Rimac?

Hyundai has 14 percent, Porsche is at 15.5 percent, Camel Group, a battery company from China, has 19 percent. I have 43 percent, and we have other smaller investors.

Do you need more investors?

Are you open to selling more of your own stake?

We are considering it. Maybe not to other car companies, because we have a sufficient number of strategic relationships, so we are talking with some financial investors at the moment. We are quite good in terms of money right now, but we have big plans for a big new factory, and for stuff we want to do.

When will we see the first of the two cars from Hyundai you’re working on?

Will they be concept vehicles or the real thing?

We are in the prototype phase. The great thing with Hyundai is that they have a leader, Chung Mong-koo, who makes a decision and that is it. So the process is super short. We are developing and producing prototypes to show different stakeholders. If the feedback is positive, then we go into production.

Will Rimac or Hyundai build the cars?

More in the lower range than a million. I don’t know it myself because we are trying to get our expensive components down to a really acceptable level. But I don’t know how far we will get. You wouldn’t believe how difficult it is to answer that question — even for us internally.

Ten years ago we wanted to show that electric cars could be exciting and fun. And, since we needed to make a living, we looked at where we could be competitive. That is why we went into the high-performance segment.

Nobody needs that. Who needs an SUV? If it was about what people needed, everybody would drive a Skoda Octavia. Why would you need anything else?

Will drivers be able to control all that power?

Yeah, it’s easy to drive. And even if you can’t, it has autonomous features.

How many will you build and when will we see it?

It will be at Geneva in March. It’s limited to 150 units. We will start shipping the car at the end of 2020. The production rate will be 40 to 50 cars a year, so, one a week. The Pininfarina Battista is based on the same platform and is built in the same factory. So, it’s basically two cars a week — one for us, one for them.

What is your long-term goal?

We want to be the leader in high-performance electrical components. That means the manufacturers producing premium high-performance vehicles — the Porsches, Mercedes AMGs, Audis, Aston Martins, Lamborghinis and Ferraris of this world — would have our components in their cars.

Which components specifically do you want to make?

We also want to do this for hybrids. We already supply the hybrid battery pack for the Aston Martin Valkyrie hypercar.

Who you are working with?

I can reveal the ones we have announced: Porsche, Hyundai, Aston Martin, Koenigsegg, Renault and Pininfarina. But, we work with pretty much everybody.