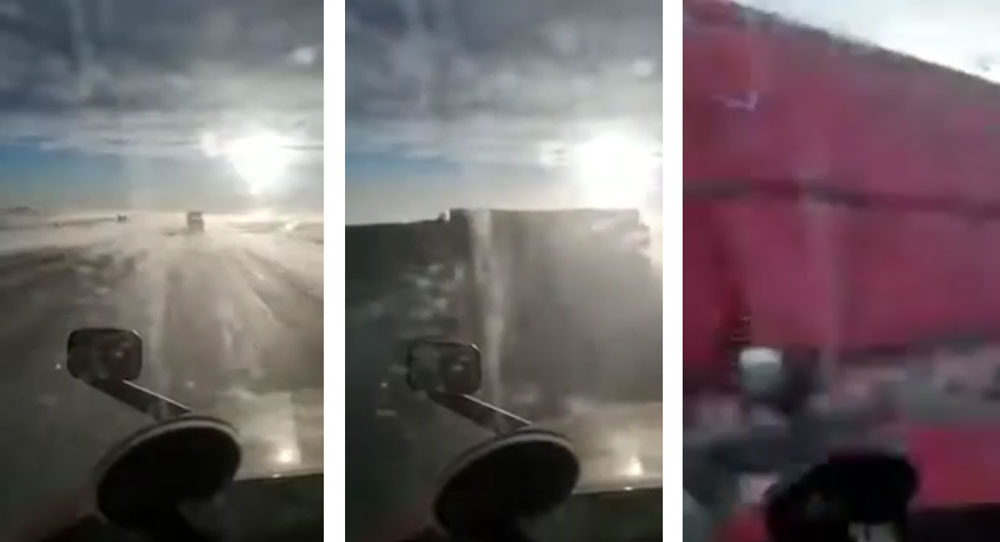 
Scary footage shared on Youtube has captured the moment a truck slammed into another large truck on Interstate 80 east of Laramie, Wyoming on January 31, 2020, in a pileup involving more than 24 vehicles including 19 commercial trucks.

According to the uploader, the driver of the truck in this video was live-streaming with his phone mounted to the windshield while his co-driver was asleep in the bunk.

For the first minute or so, nothing much happens although it’s impossible not to notice that it looks as if the road is covered solely in ice, making for very difficult driving. At around the 1:45 mark, the driver notices the truck in front of him start to slide out of control before skidding to its left and rolling over. He can be heard screaming “Josh! Hold On! Hold On!,” knowing full well he wouldn’t be able to brake in time to avoid disaster. At 1:55, the truck crashes at what looks to be quite high speed.

Also Watch: Havoc Reigns As Over 50 Vehicles Get In Huge Pileup In Iowa

Fortunately, both the driver and co-driver weren’t seriously injured in the crash.

Local media reports that at 7:45 a.m. on January 31, a highway patrol trooper stopped to check on motorists who slid off the highway in the icy conditions. At the same time, two eastbound commercial trucks collided and before long, two dozen vehicles had been involved in the crash.

All those injured were transported to the Ivinson Memorial Hospital in Laramie.