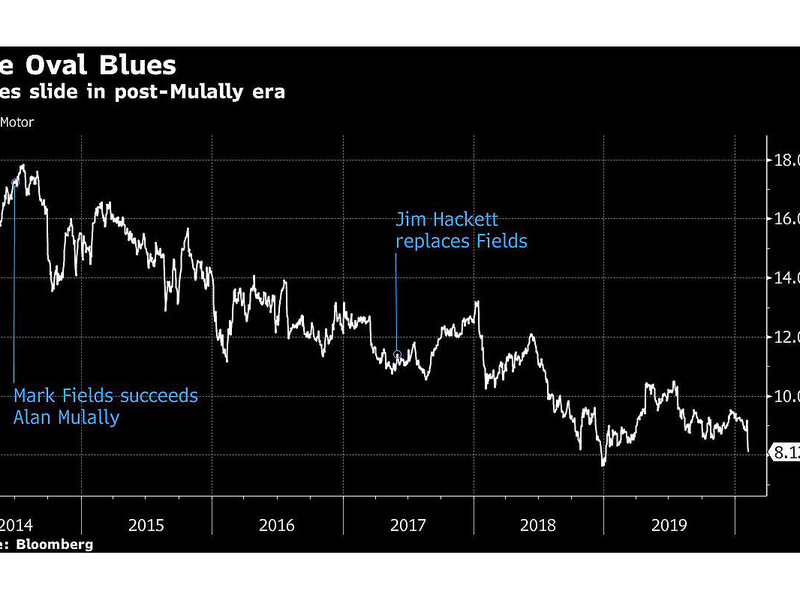 DETROIT — A little executive bloodletting can sometimes ease the pressure on an embattled chief executive officer. But Jim Hackett is unlikely to see any letup from Ford Motor Co.’s board following the surprise early retirement of one his two top lieutenants.

Joe Hinrichs, Ford’s 53-year-old automotive president, will leave on March 1 after almost two decades with the company. As a rising star under celebrated former CEO Alan Mulally, he was put on the fast track to be a potential heir to the top job.

With Hinrichs out of the picture, Ford is elevating Jim Farley, the company’s only other president, to become the first COO since the automaker planned for Mulally’s succession seven years ago. The announcement that the board will revive the role of COO came days after Hackett reported dismal earnings results, dogged by the disastrous rollout of the redesigned Explorer large crossover, and forecast more disappointing numbers for the upcoming year.

“This signals to everyone that Farley is Hackett’s successor, unless they plan to go outside the company,” said David Whiston, an analyst with Morningstar in Chicago. “Perhaps it could be nine months from now, or it could be 18 months from now, but they will make an announcement that Hackett is retiring and Farley takes over as CEO.”

Hackett, who was asked by an analyst 18 months ago whether he expected to last in the job, told reporters Friday he’s not going anywhere.

“As far as my tenure, this is the kind of thing I love to do and I’m having a really fulfilling assignment here,” said the former CEO of office-furniture maker Steelcase Inc. “I need to be here.”

Since being pressed into duty almost three years ago by Executive Chairman Bill Ford to stabilize his family’s foundering automaker, Hackett, 64, has promised to accelerate the 116-year-old company’s “clock speed.” But Wall Street analysts have long groused that Hackett’s global restructuring has moved at a plodding pace.

“There is a long way to go,” Michael Ward, a Benchmark Co. analyst who rates Ford a hold, wrote in a report Monday, cutting his projection for earnings this year and warning that cash needs for restructuring are likely to remain a headwind into 2021. Morgan Stanley’s Adam Jonas wrote separately that he made the “wrong call” upgrading Ford to the equivalent of a buy in August and making it his top pick among U.S. auto stocks.

Ford shares have fallen 25 percent under Hackett and by more than half since the departure of Mulally, the only CEO of a Detroit automaker who kept his company out of bankruptcy in 2009.

Hackett himself acknowledged Ford has run out of margin for error when he told analysts during last week’s earnings call: “It does boil down to we can’t miss a beat now in the product launches.”

On Friday, he addressed the costly mistakes made with the Explorer again, telling reporters there’s “no room for that type of miss” anymore.

In an interview Friday, Farley, 57, didn’t want to talk executive succession. But he said he’s eager to pick up the pace as Ford rolls out a redesigned F-150 pickup — its most profitable model — and pours billions into the electric and self-driving cars upending the industry.

“We cannot wait years and years,” Farley said by phone. “In the context of our industry and how it’s changing, we have to accelerate.”

Farley joined Ford from Toyota Motor Corp. in 2007, just before the bottom fell out of the U.S. auto market. He helped navigate the company through the Great Recession without resorting to the government bailouts and bankruptcies that befell General Motors and Chrysler.

A marketing specialist and cousin of the late actor and comedian Chris Farley, Jim Farley broadened his skills over the years with stints running Ford’s European operations and launching a comeback at Lincoln. Most recently, he’s been head of strategy and technology, cutting deals with Volkswagen Group and Rivian Automotive Inc. on electric and autonomous vehicles.

Along the way, Farley earned a reputation as a tough taskmaster, never afraid to speak his mind and throw a few elbows.

“F— GM, I hate them and their company,” he was quoted as saying in the 2011 book “Once Upon a Car” by then-New York Times Detroit Bureau Chief Bill Vlasic. “I’m going to beat Chevrolet on the head with a bat.”

Farley’s tone may have softened since then, but his drive remains and Ford insiders are bracing for an extremely demanding new boss.

“Farley is very blunt, and I think Wall Street is actually going to like that because it’s such a contrast from Jim Hackett being very indirect,” said Whiston, who has the equivalent of a buy rating on Ford. “Farley has worked on his temperament a bit and tends to give more diplomatic answers now. The f-bombs are probably a thing of the past.”

As for when Hackett might become a thing of the past, Farley isn’t speculating.

“That’s for the board to decide,” Farley said. “My job is to get the most out of this team, just like we did many years ago, and bend that curve of financial performance and make the right bets strategically.”

Melinda Grenier contributed to this report.