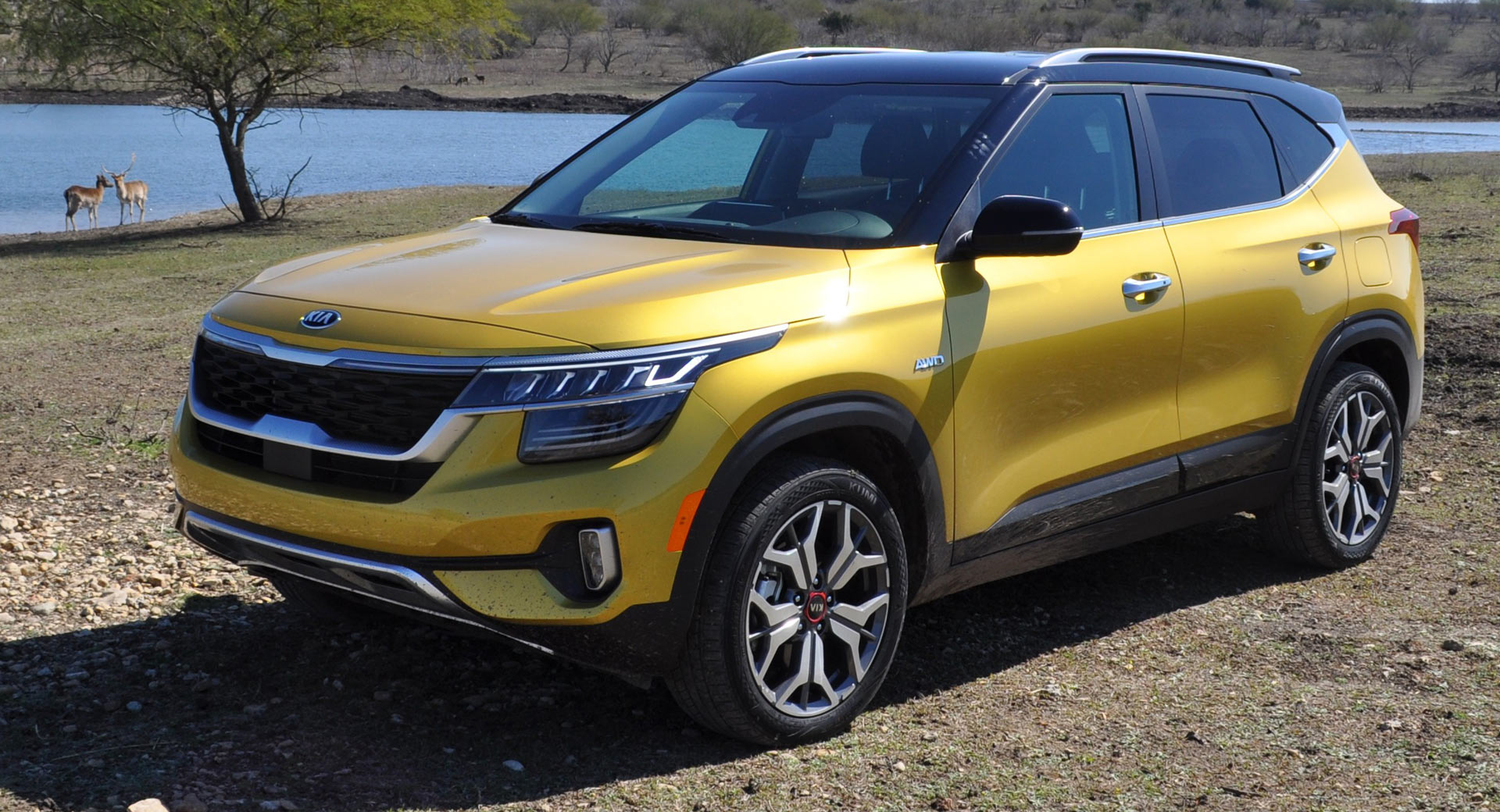 Consumers have an insatiable demand for crossovers, but many entry-level models are lackluster or feature significant tradeoffs such as being too small or front-wheel drive only.

Kia thinks they have the solution with the 2021 Seltos which is currently on sale in the United States with a base price of $21,990. While a handful of crossovers are cheaper, the Seltos is roomy and effectively comes standard with all-wheel drive.

Those are notable advantages, but the model is entering one of the fastest growing segments. In the past year alone, we’ve seen the introduction of the Buick Encore GX, Chevrolet TrailBlazer, Mazda CX-30 and Hyundai Venue. That’s on top of already established competitors such as the Ford EcoSport, Honda HR-V, Jeep Renegade, Nissan Kicks and Toyota C-HR.

A Distinctive Face In A Increasingly Crowded Segment 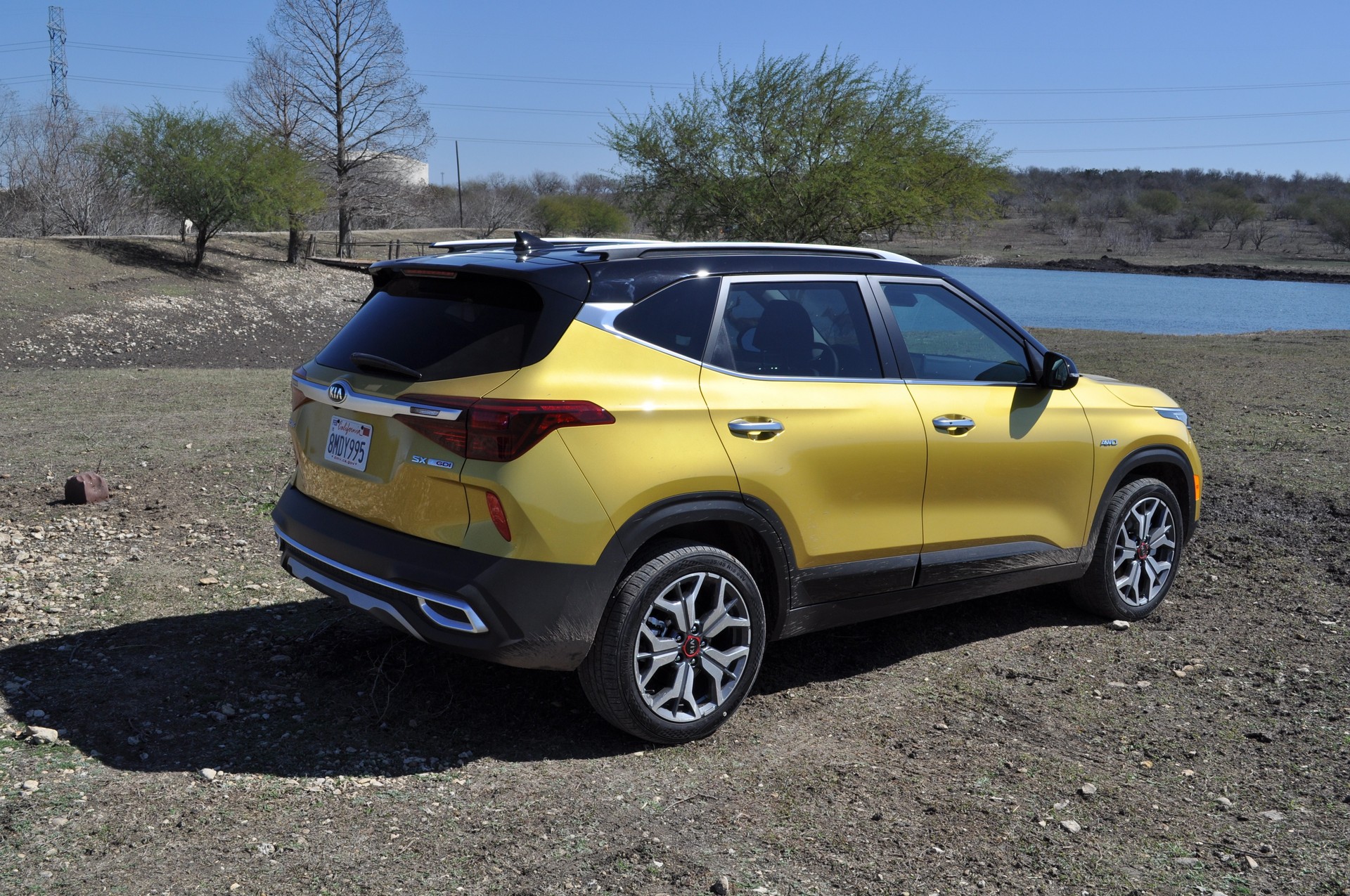 Entry-level crossovers aren’t huge on style, but we think the Seltos looks pretty good. Part of this can be chalked up to the model’s rugged design which includes silver skid plates and plastic body cladding. The crossover also has 7.2 inches (183 mm) of ground clearance and an approach angle of 28 degrees. The latter beats the Jeep Renegade and Subaru Crosstrek.

Besides the off-road inspired design, the Seltos has a distinctive front fascia and a rakish windscreen. Other notable highlights include a gently sloping roof, a sporty rear end and a dynamic greenhouse with standard privacy glass.

The value-focused Seltos LX looks a little plain, but higher end variants feature LED lighting units, a contrasting roof and 18-inch alloy wheels. The crossover can also be equipped with chrome accents and a sunroof.

A No Fuss Interior 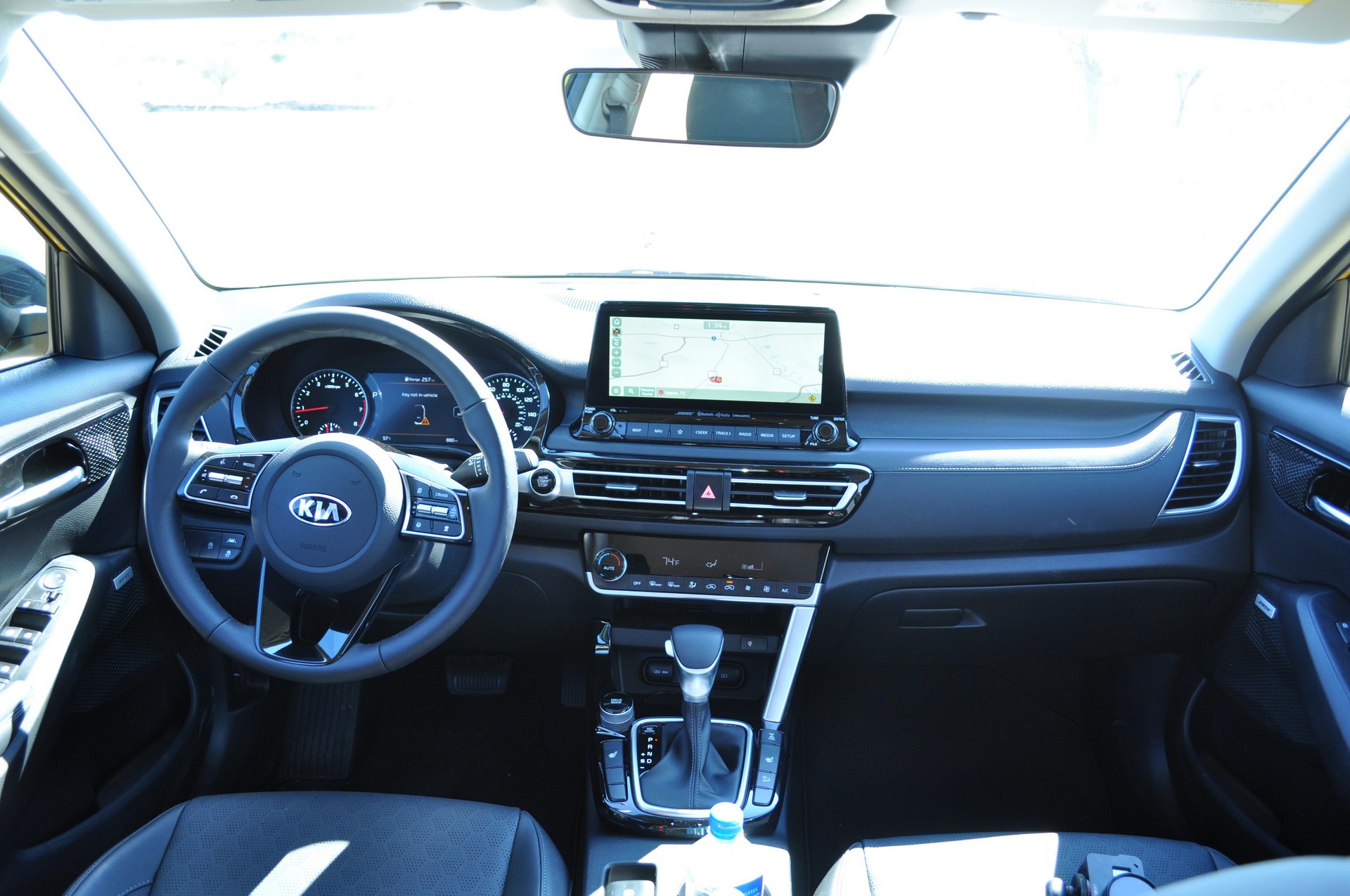 Kia has stepped up their game, in terms of interior design, and the Seltos is no exception. Despite being somewhat value-focused, the model features a relatively stylish cabin with gloss black trim, metallic accents and an 8- or 10.25-inch infotainment system.

We drove the range-topping Seltos SX and were pretty happy with the build quality and material selection. That being said, the model is an entry-level crossover so don’t get your hopes up too high. There’s a lot of hard plastic in the cabin, but designers disguised this by giving the dash pad and door armrests faux stitching. They’re still pretty hard, but at least they look nice.

Speaking of nice, the leather-wrapped steering wheel is a perfect fit and features a host of buttons that provide easy access to commonly used controls and functions. Behind the steering wheel, there are analog gauges and a 3.5- or 7-inch TFT display. The latter is exclusive to the SX and that’s a shame as it provides a wealth of information. 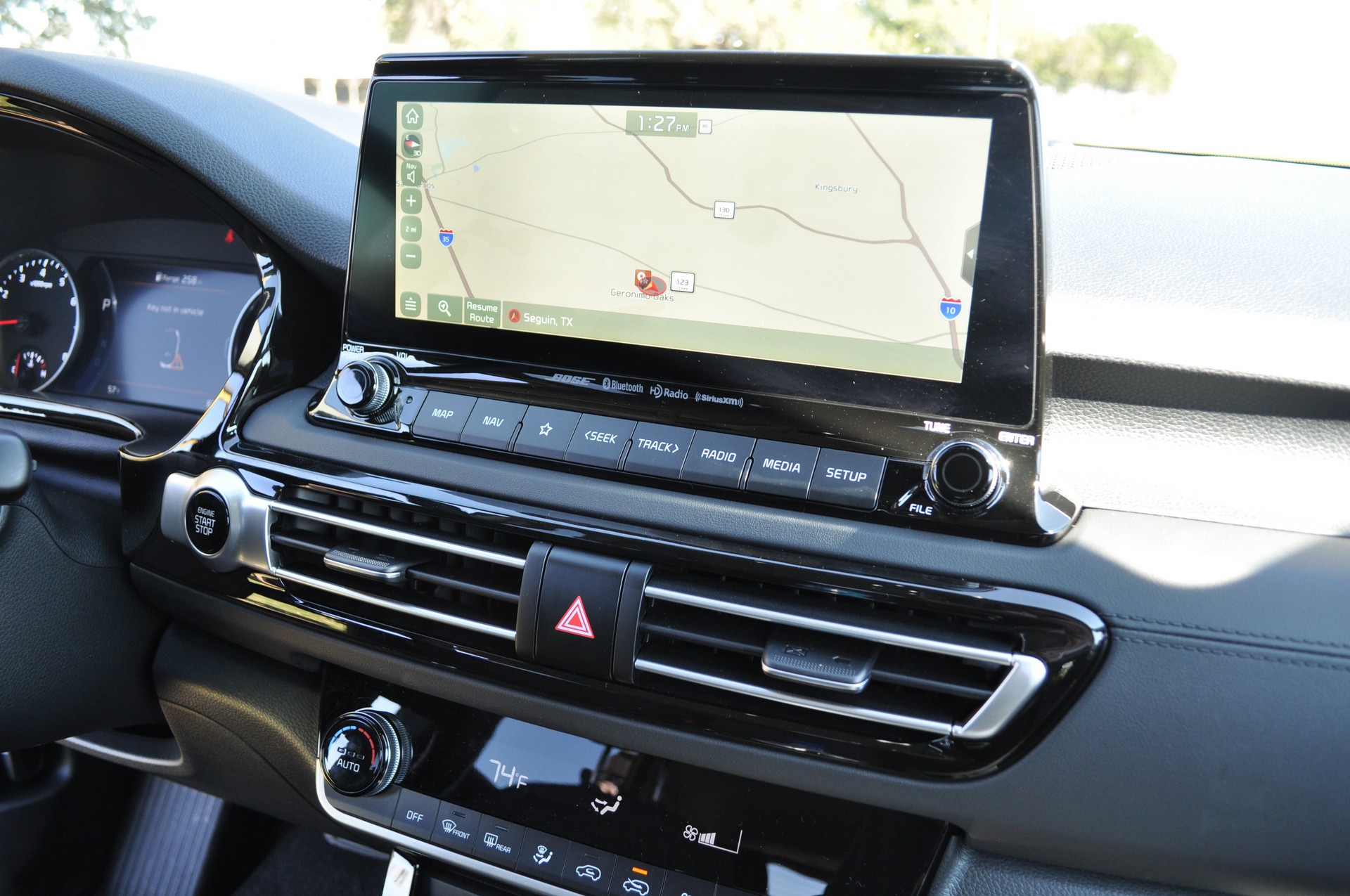 On the topic of displays, the infotainment system is mounted high on the dashboard and within easy reach. The system is pretty intuitive and features dedicated controls for audio volume, tuning and commonly used display screens. Besides being easy to use, the infotainment system has voice recognition technology as well as Android Auto and Apple CarPlay compatibility.

Elsewhere, there are cloth or leatherette seats. They’re a bit on the hard side, but I warmed up to them after a few hours of use.

Unsurprisingly, the driver’s seat is the place to be as Seltos EX and SX have 10-way power adjustment with lumbar support. The front passenger seat is limited to four-way manual adjustment as power isn’t even an option. 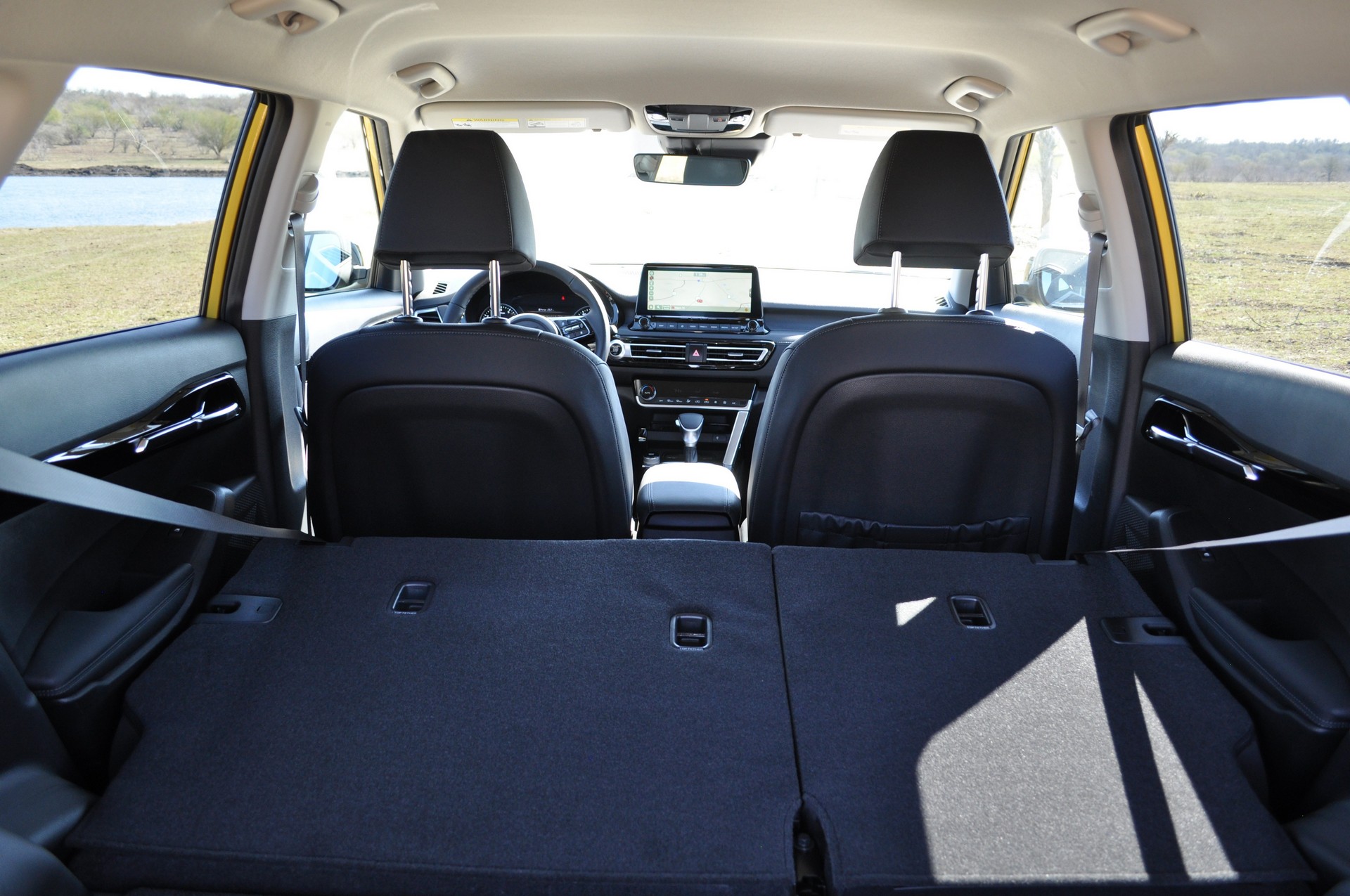 On the bright side, there’s plenty of head- and legroom up front. The rear seats are also surprisingly spacious as there’s 38 inches (96.5 mm) of legroom back there. That’s slightly less than the Honda HR-V, but significantly more than the Jeep Renegade, Ford EcoSport and Toyota CH-R. As an added bonus, the second row seats can also be reclined.

Speaking of space, Kia says the Seltos has the most cargo room in its segment. There’s 26.6 cubic feet (753.2 liters) behind the second row, and that can be expanded to 62.8 cubic feet (1,778.3 liters) by folding the rear seats down and putting the load floor into its lowest position.

That’s a ton of room for such a small vehicle and it means the Seltos is nearly as accommodating as the larger GMC Terrain which has 63.3 cubic feet (1,792 liters) of cargo space. It also blows the Jeep Renegade out of the water as the Seltos holds an extra 12.5 cubic feet (354 liters) of luggage.

The Turbo Offers Plenty Of Power, But … 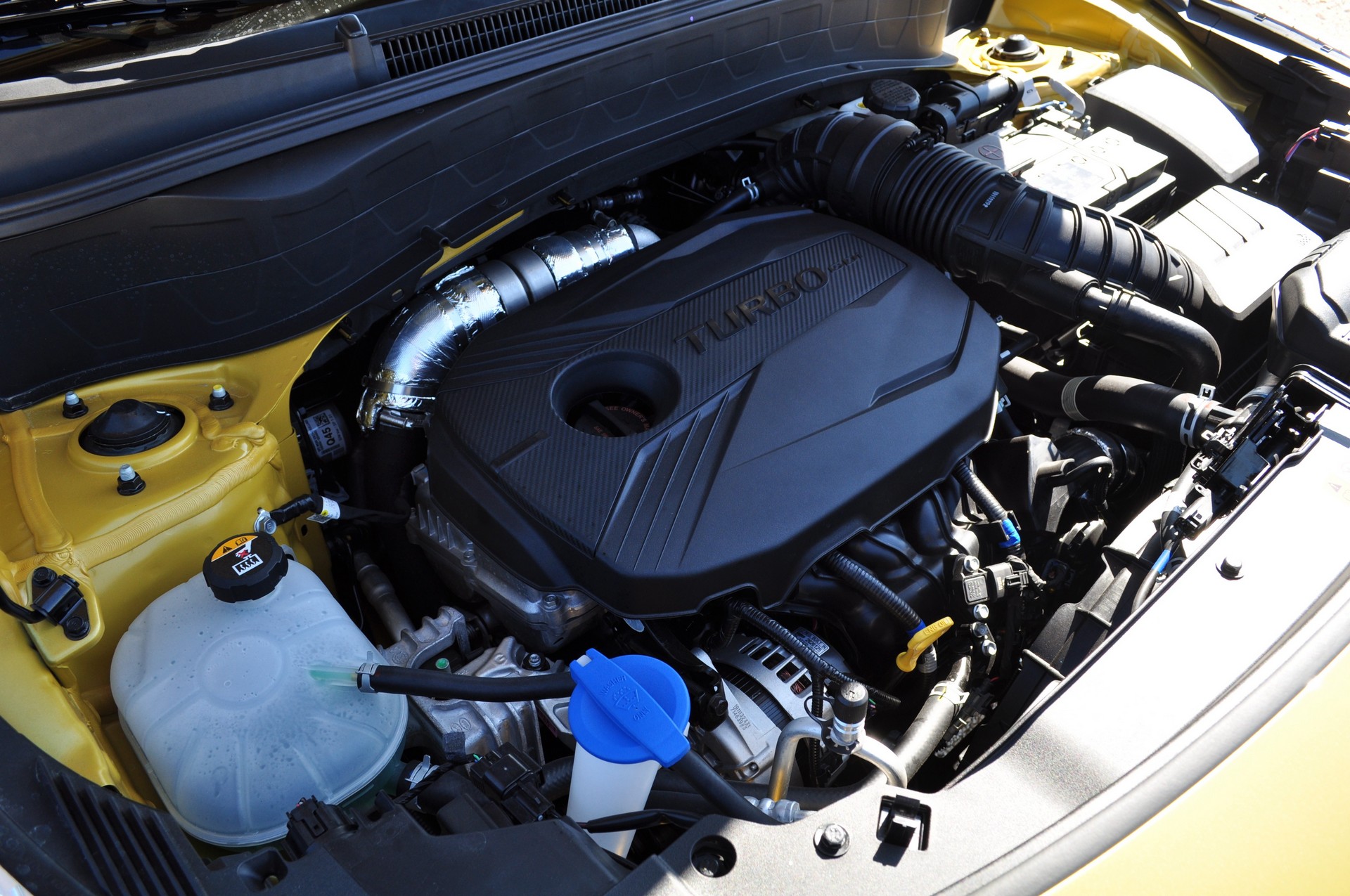 Under the hood, two engines are available. Entry-level models are equipped with a 2.0-liter four-cylinder that produces 146 hp (109 kW / 148 PS) and 132 lb-ft (179 Nm) of torque. It is connected to an intelligent variable transmission which can send power to either the front or all four wheels.

Customers can also opt for a turbocharged 1.6-liter four-cylinder with 175 hp (131 kW / 177 PS) and 195 lb-ft (264 Nm) of torque. Besides being more powerful, the turbocharged engine is paired exclusively to a seven-speed dual-clutch transmission and an all-wheel drive system. 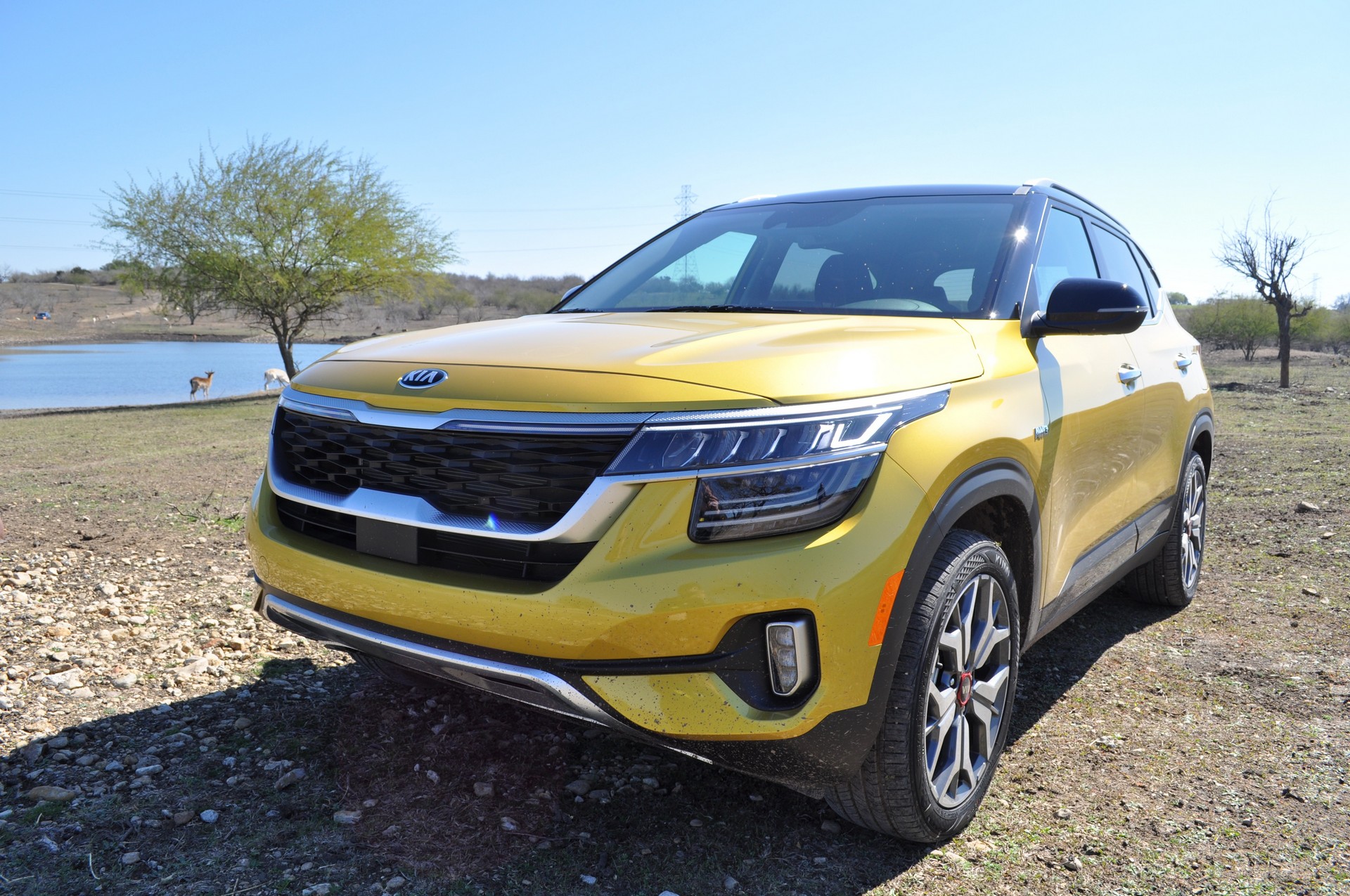 While we didn’t get a chance to test the base engine, the turbocharged four-cylinder has plenty of power and is one of the strongest in the segment.  As an added bonus, we didn’t experience much turbo lag.

Unfortunately, the seven-speed dual-clutch transmission isn’t perfect. During our limited time with the Seltos, there was one occasion where the gearbox seemingly got confused and didn’t change gears as quickly as it should have. This only happened once, but slow shifts have been a common complaint about the DCT so it might not be a fluke.

The rest of the driving experience is better, but not particularly exciting. The steering is nicely balanced as it doesn’t feel too heavy or light, but it’s not very engaging. 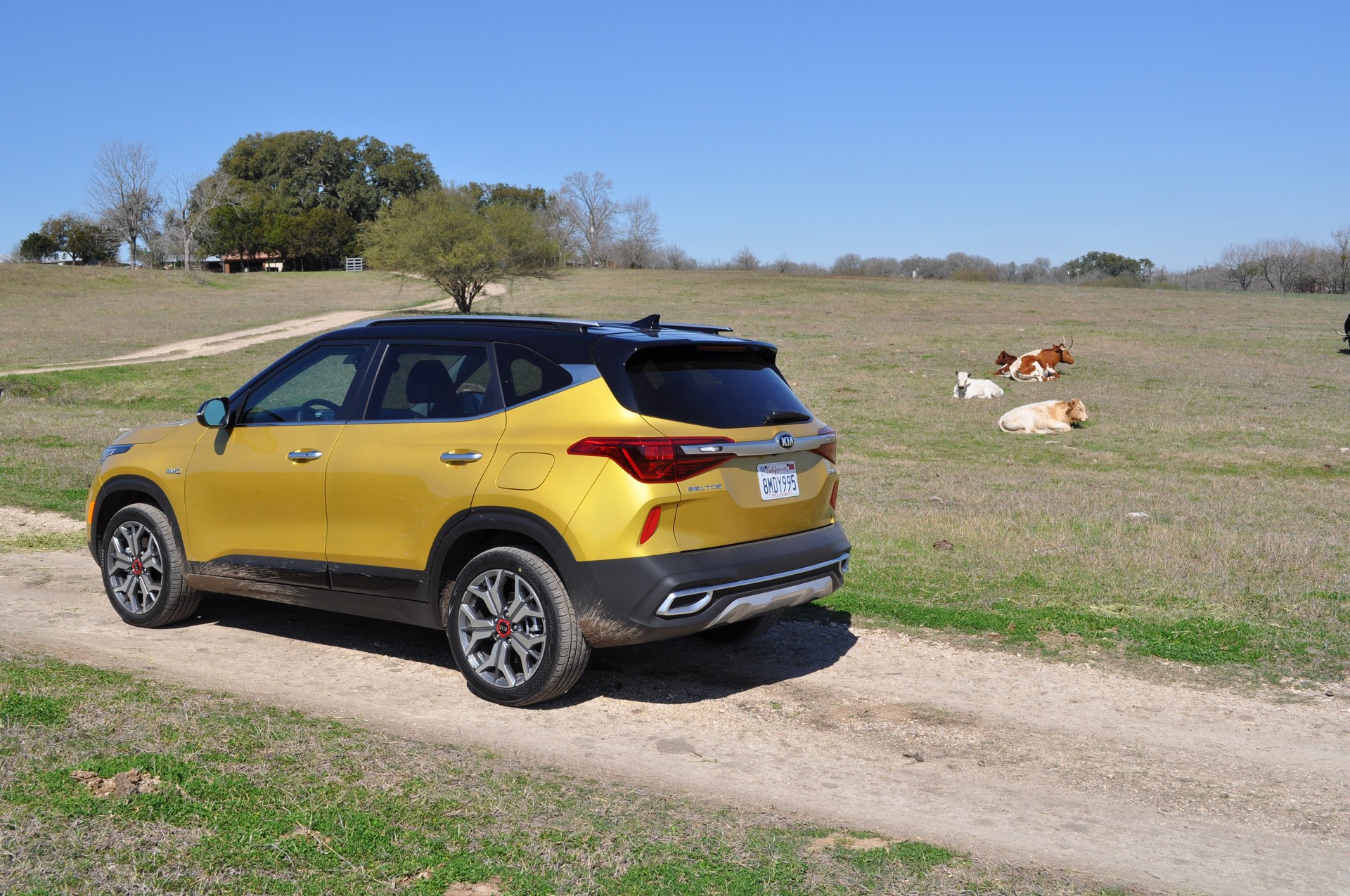 When it comes time to stop, 15- and 16-inch discs are called into action on the SX. They do a good job as they deliver strong and predicable braking.

On relatively smooth Texas roads, the Seltos proved a comfortable companion. Nothing seemed to upset the chassis, but it’s definitely tuned for comfort rather than sport. This limits the fun factor, but it’s hardly surprising and the crossover always felt stable and secure.

Besides the powertrain hiccup, the only other thing that marred the driving experience was a slightly loud interior. Wind and road noise is pronounced in the cabin, but it’s not a deal breaker by any stretch of the imagination.

An Affordable And Spacious Crossover That Tries To Stand Out 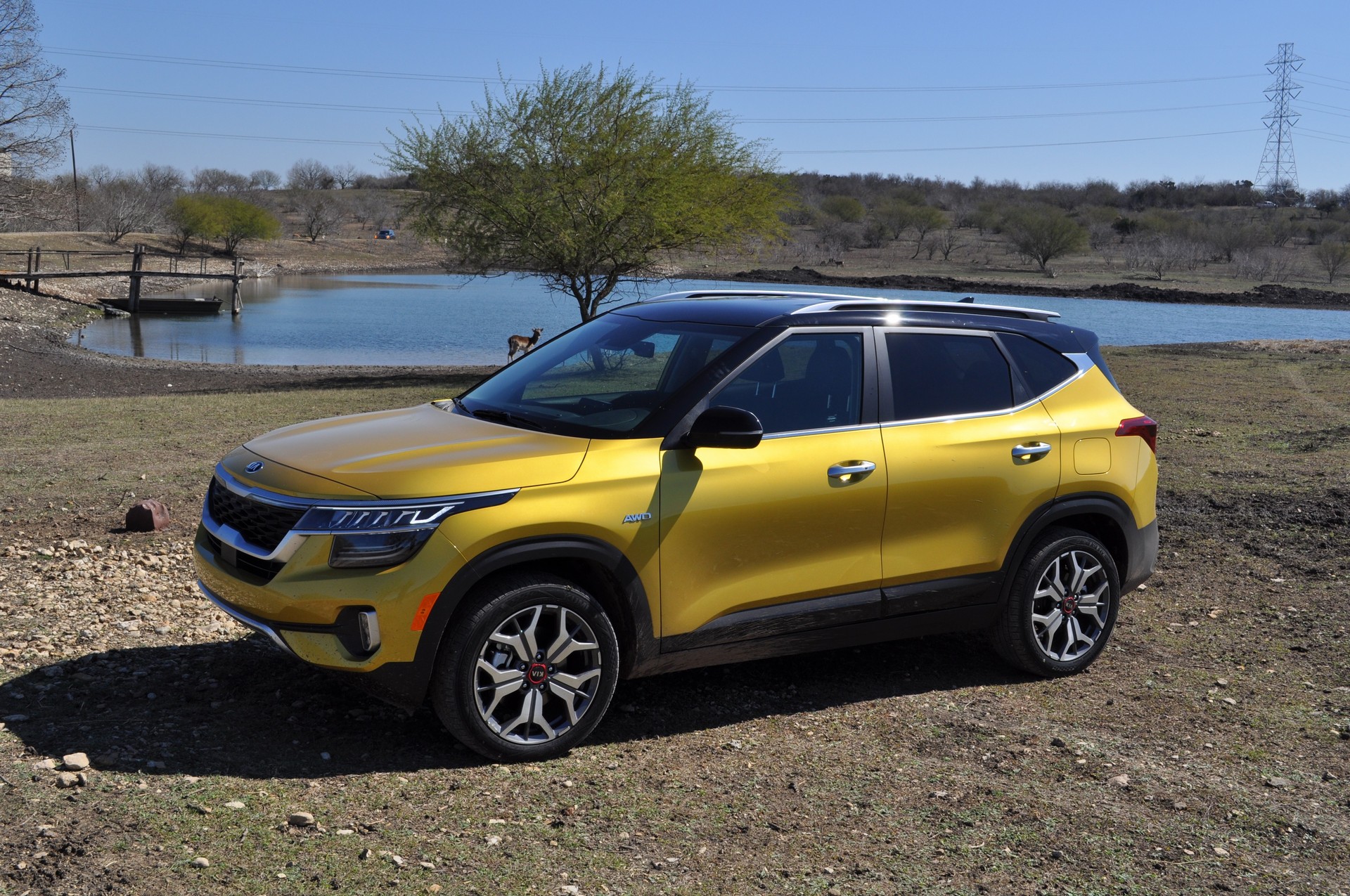 While the Seltos isn’t perfect, the crossover does have a lot going for it. Besides being spacious and comfortable, both the front-wheel drive S and all-wheel drive EX start at $21,990. That’s pretty reasonable and well equipped models can be had for less than $25,500.

Putting pricing aside, the Seltos is relatively fuel efficient and has a decent cabin. The model can also be equipped with an assortment of driver assistance systems including forward collision avoidance assist, lane keeping assist and rear cross traffic collision avoidance assist. That’s on top of blind spot monitoring, high beam assist and forward collision warning – just to name a few.

In the words of Kia officials, the Seltos is “rugged, refined and right-sized.” It’s hard to argue with the latter, but we just wish there was a bit more refinement.