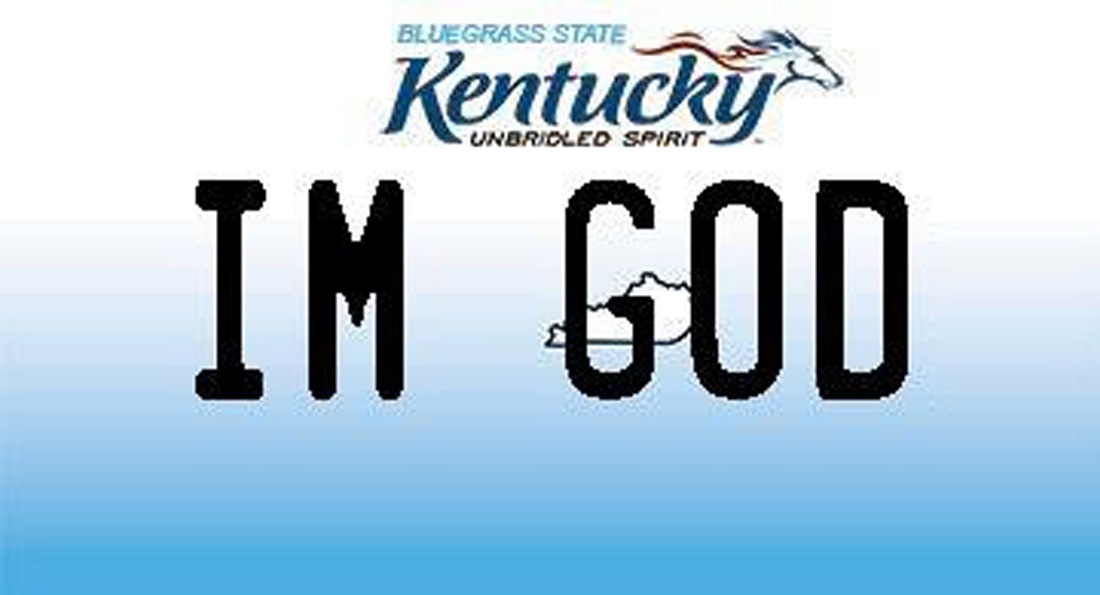 The case started in 2016 when Hart and his wife moved from Ohio to Independence, Kentucky. For the past 12 years or so, Hart tooled around the Buckeye State with a plate saying “IM GOD.” Following the move, he applied for the same plate in Kentucky.

Also Read: This Canadian’s Last Name Was Too Dirty For Vanity License Plate

WaPo: Ben Hart says no one can prove he’s not God. And now the state of Kentucky can’t stop the 80-year-old longtime atheist from spelling out the claim — “IM GOD” — on his license plate.

Court documents say the plate was initially approved, but the “county clerk responsible for dispersing the plate to Mr. Hart … contacted KYTC expressing concerns about the plate’s ‘appropriate[ness]’ and asking that the state ‘not print it.’”

Following a discussion, the KYTC decided to reverse course and deny the plate. They then sent Hart a letter saying the plate was denied because “it does not meet the requirements of KRS 186.174 and 601 KAR 9:012. Section 5. These laws dictate that a personalized plate may not be vulgar or obscene.”

That’s an odd way of putting things, so Hart reached out for clarification. He was reportedly told the plate was “in bad taste” and that message was echoed in a later letter saying “the plate was not rejected because of vulgarity or obscenity … the use of ‘IM GOD’ is not in good taste and would create the potential of distraction to other drivers and possibly confrontations.”

While the KYTC contradicted themselves with the second letter, Hart wasn’t going to give up without a fight. CNN reports the ACLU of Kentucky and the Freedom from Religion Foundation filed a lawsuit on Hart’s behalf in November of that same year.

This sparked a legal battle where attorneys for Hart argued Kentucky’s vanity plate program violates the First Amendment and that “KRS 186.164 contains unreasonable impermissible viewpoint restrictions.” The lawsuit also noted that while “IM GOD” was rejected, the KYTC didn’t have any problem with other God-related plates including “THX GOD,” “MY GOD,” “HES GOD,” “IM4 GOD,” “PRZ GOD” and “LUV GOD.”

The case came to head in November of last year when the court ruled “To allow such plates as ‘IM4 GOD’ and ‘LUV GOD’ but reject ‘IM GOD’ belies viewpoint neutrality.” The court also said the statute on vanity plates was “unreasonable and therefore [an] impermissible restriction on Mr. Hart’s First Amendment rights.”