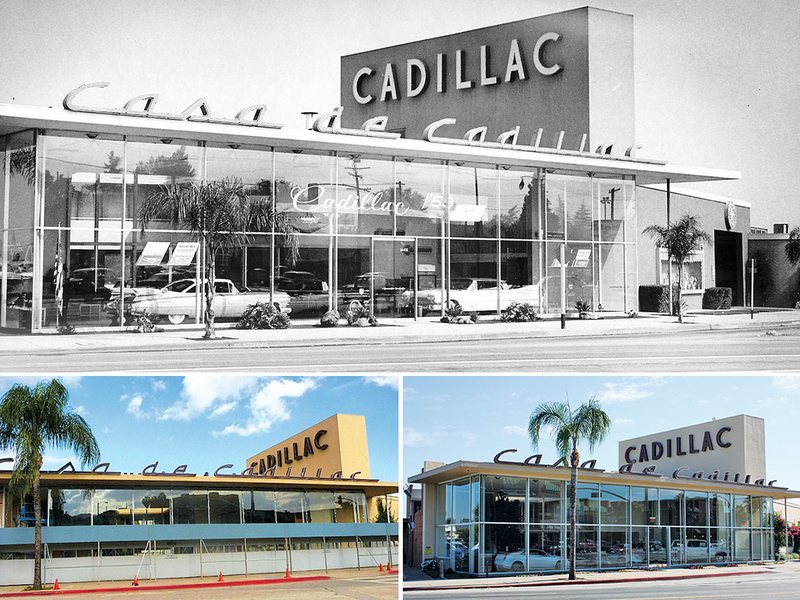 It’s not nearly as big or world famous as the Hollywood sign about 10 miles away. But the eight-foot block “Cadillac” lettering along Ventura Boulevard in Los Angeles has been a landmark in its own right since 1949.

The cinematic white neon sign atop Casa de Cadillac has attracted film crews from the likes of Transformers and drawn top musicians, including Tom Petty.

Above the store’s glass facade, “Casa de Cadillac” is written in the same script found on the badge of a 1949 Cadillac. With terrazzo floors, long window panes and a pitched ceiling, the dealership in LA’s Sherman Oaks neighborhood continues to embrace midcentury modern design more than seven decades after it was built.

But preserving that architecture is a challenge — which is compounded by the endless red tape involved in running a modern-day car dealership.

Dealer Howard Drake has had to find a balance between meeting Cadillac’s evolving brand standards and protecting a pillar of famous Ventura Boulevard. He’s done it by working closely with his architect, city officials, the conservancy, the Gensler design firm and General Motors.

Casa de Cadillac was one of the first dealerships to open in the San Fernando Valley when the rural area was becoming suburban.

“This dealership was opening just at the same time as many people were buying houses, building houses,” Fine said. “A lot of development was happening in the valley. And this dealership was really central in terms of a car culture” on Ventura Boulevard.

One of the designers, Randall Duell, was a Hollywood set designer and architect, according to the conservancy. The dealership opened as Don Lee Cadillac but later changed ownership and was renamed.

The dealership falls under the Ventura Specific Plan, a comprehensive zoning overlay that includes many restrictions designed to protect the culture of Ventura Boulevard.

The conservancy has featured Casa de Cadillac on tours, on its websites and in special events related to important buildings in the area. It has been featured in TV shows and movies, including Transformers and Commando, and in music videos for Tom Petty’s “Free Fallin’ ” and Haim’s “Want You Back.”

Drake knew in 2010 when Cadillac told him about its new image program that he couldn’t afford to pass it up, but he also couldn’t make the updates without causing friction locally.

“This is a beloved building,” Fine said. “Most people don’t expect a Cadillac dealership to have that kind of following, but anyone in this area that’s been here for any period of time, they know Casa de Cadillac. It’s just part of the story of the San Fernando Valley and Los Angeles. You mention Casa de Cadillac, people have a story associated with it.”

Drake had planned to update the dealership years earlier, but the recession held him back. With Cadillac’s 2010 program, a sense of urgency kicked in. Cadillac awarded a dollar amount per vehicle sold for dealers who participated in the program.

“Now Casa has got to do it,” Drake said. “Not being in [the program] was essentially a financial death sentence.”

The conservancy was concerned that GM’s request would compromise the building’s historic architecture, so with Drake, the group aimed to help GM understand the significance of the dealership.

Many dealers gripe about facility upgrade programs. They can be costly and yield little return. To make these changes, no matter the brand, dealers have been building boxes that they can adjust for fluctuating requirements.

Automakers, meanwhile, aim to create a consistent brand image across their network and keep stores looking up to date. But Casa de Cadillac’s fame comes from the very fact that it doesn’t look like every other dealership.

“Casa predates this concept, and the midcentury architecture is the main element,” Drake said. “Unlike today’s agnostic structures, Casa was built specifically for Cadillac.”

Cadillac requested that its dealerships add black tile, limestone detailing, a Cadillac tower at the entrance and standard signage, among other modifications.

Casa de Cadillac’s signage was a defining characteristic of not only the store, but of Ventura Boulevard. “That alone would have been a major departure from Casa de Cadillac,” Fine said. The sign is as significant as the building itself, he said.Cadillac eventually agreed that the dealership could keep its two signs and add smaller signs that aligned with brand standards.

Drake added some limestone and a Cadillac tower at the side entrance rather than the main entrance Cadillac originally requested.

Another sticking point was covering the terrazzo floor, a staple of midcentury modern architecture, with black tile. Cadillac allowed Drake to cover two chunks of the floor with large black pads that wouldn’t damage the terrazzo underneath.

“I know that the limestone hurt [Cadillac], but getting us to keep the existing sign, that was probably the hardest swallow they had to make,” Drake said. “Every brand … wants their current signage. And I’m sympathetic to that.”

Still, Drake added, “no one drives by here and doesn’t know it’s a Cadillac store.”

Overall, Casa de Cadillac spent more than $4 million on updates related to the image program. Many of the enhancements were by the book, in accordance with Cadillac’s vision. Others were designed to capture the intent of the program while maintaining the building’s architectural integrity, Drake said.

“One of the ironies of Casa’s whole ordeal is most of the time, dealers are asking for exceptions to save money,” he said. “The vast majority of the exceptions we got cost us money.”

For example, the store had a 4-inch stucco ceiling from the 1940s that no one liked, but everyone wanted to keep its stainless steel spotlights.

Cadillac suggested installing an egg-crate drop ceiling as a cost-effective way to preserve the spotlights and meet brand standards. But Drake’s architect was opposed to the idea. So Drake decided to tear out the ceiling and replace it with a new one that maintained the original plane.

Drake also added a glass partition to the service drive to mimic an Apple genius bar, built a training office and completely revamped the building’s infrastructure.

Other dealerships in the area have been torn down or have gone through “unsympathetic remodeling,” Fine said.

“There are other ways to achieve meeting the corporate brand but doing it in a way that doesn’t have to destroy the character of the building,” Fine said. “And that’s where I think there’s a nice marriage here between GM and the local dealership in terms of finding a way to make that work.”

There are often discussions among the automaker, dealer and municipality about zoning, dimensions and legal requirements, said Bill Hartman, principal at Gensler, a Detroit design firm that works with automakers and dealerships to define and implement facility image programs that improve the customer experience.

“What is oftentimes left at the curb is a consideration of what makes good architecture and what makes a good experience for people in that design and in that encounter with buildings,” Hartman said. “Here’s a case where those elements were in the forefront.”

The Casa de Cadillac situation is unique, but it’s not the only example of community regulations affecting image requirements, said Hartman.

In such cases, “the art in getting things done is being able to work collaboratively with all the parties,” he said. With Casa de Cadillac, he added, there was a “compromise that would allow the image improvements to be consistent with the Ventura Specific Plan but also improve the customer experience at the store.”

As Hartman sees it, the customer won in the end. Customers now have an updated environment for sales and service in a meaningful setting.

“They were able to enjoy the Cadillac experience on a site where they were also able to enjoy and reflect upon the great history of Ventura Boulevard and what it means in terms of the … architecture that California was known for decades ago,” Hartman said.

Drake said he’s been proud to maintain the character of his store while making it “uniquely Cadillac,” he said.

“Both customers and dealer friends walk in to Casa, look around and say that it must have been a battle royale with GM to maintain the structure,” Drake said. “It was exactly the opposite.”