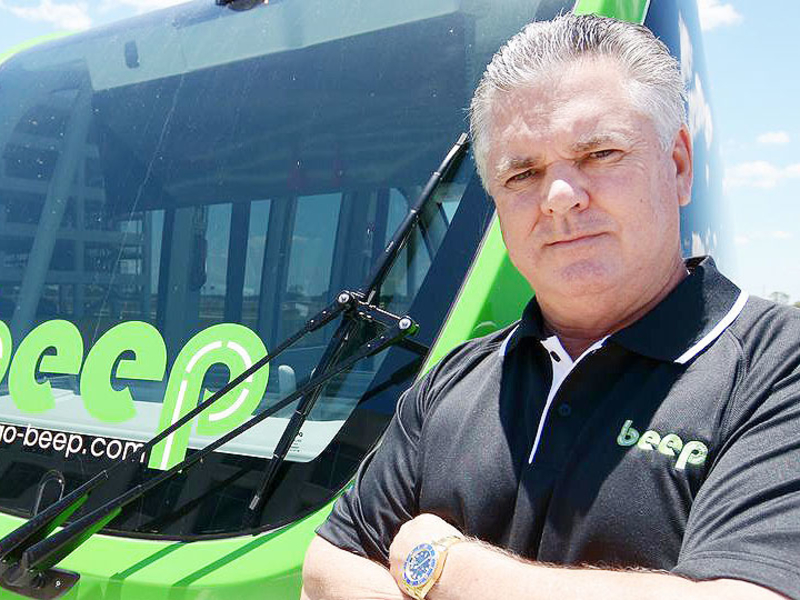 In an industry endlessly fascinated with the companies creating the self-driving future, Beep Inc. often registers not a peep.

The company does not write its own code. It does not develop its own self-driving stack. Nor does it manufacture vehicles. Nor host a platform that matches riders and drivers.

Beep is a pure fleet operator and content to stay in that lane. Others in the fledgling autonomous-driving industry largely look to commingle technology, vehicles and networks.

“We think that’s shortsighted,” said Beep CEO Joe Moye. “And it presents us an opportunity.”

At a time when mobility services face headwinds, the Orlando-based startup’s standalone approach has gained traction. In September, the company launched its first route, in partnership with a real estate development firm, in a planned community near its Central Florida home.

On Saturday, Beep expected to launch in a second location. During spring training, the company will provide transportation for baseball fans headed for the ballpark in Peoria, Ariz.

Contracts with Florida’s Jacksonville Transportation Authority and Pinellas Suncoast Transit Authority have been signed, Moye said, with others involving a university and another residential community near completion. All told, Beep has 11 vehicles under its management, and by midyear, that’s expected to increase to 25, as the company blurs the line between public and private transportation.

“This isn’t kicking the tires on the technology,” he said. “This is approaching it from the vantage point of, ‘This is the future means of transportation for these communities, and that requires someone that understands what it takes to bring to bear all the services you need to be operational.’ ”

LaHood and Woebcken do not have precisely defined roles.

In four months, the shuttles have carried more than 10,000 riders around a single route in Lake Nona, the Central Florida project. Two more routes are expected to be added by the end of the month in the 18-square-mile development, making the self-described “community of and for the future” the nexus of Beep’s near-term operations.

So far, Moye says, the shuttles have been operating in autonomous mode about 93 percent of the time. Human safety operators remain on board all the shuttles and still help the vehicles navigate around obstacles such as cars parked in the shuttle’s designated stopping zones.

When Beep removes the human safety drivers — “realistically, we’re a year away,” Moye says — teleoperators stationed at a nearby operations center will be expected to handle remote driving in similar situations. That center should be ready to open in May.

There are shorter-term considerations.

Trundling along at 12 or 13 mph in 25-mph zones sometimes creates traffic jams behind the shuttles. So Beep has programmed in pullovers at designated areas where shuttles can let cars pass, then get back on their route. Slow speeds might annoy other road users, but riders don’t seem to mind.

“Our riders would tell you the difference of getting them where they want to go in five minutes versus seven minutes is not why they’re on the shuttle,” Moye said “It’s because they want to go enjoy dinner.”

Enhancing that user experience is top of mind for Moye, and the place where Beep can differentiate itself.

That said, the slow speeds hinder deployments in more complex environments. Beep is working with its vehicle supplier, French shuttlemaker Navya, to increase speeds toward 20 mph.

Navya’s electric shuttles are the lone AVs in Beep’s operational fleet. There are discussions about adding an additional platform next year. But that’s less of a focus than customer experience

“Having the ability to interface with customers with video, audio, with virtual attendances, we’re wrapping all those components together with a focus on that rider experience,” Moye said. “We think that’s really unique.”