The Union of Concerned Scientists this week published a study comparing emissions from private car trips with journeys via Uber or Lyft. Researchers also looked at the broader impact of ride-hailing on other types of urban travel, including public transportation, biking, and walking.

The top-level finding is that ride-hailing trips today result in an estimated 69% more climate pollution on average than the trips they displace. The solution? Electrify Uber and Lyft, and share rides on those services.

As the report points out, cities have regulated taxis for decades ­– and worked over those many years to improve the fuel economy of cabs. But that went out the window with the arrival of Uber, which has globally accumulated 10 billion trips (with another 1 billion from Lyft).

To add insult to injury, UCS researchers discovered that ride-hailing trips often replace less-polluting modes, such as walking, biking, and mass transit. To be clear, ride-hailing increases the total number of trips in a polluting automobile.

And then there’s “deadheading.” That’s all the miles a ride-hailing vehicle travels without a passenger between hired rides, indicated by the diagonal lines in this UCS graphic:

So whatchya gonna do? The most immediate thing, according to the study, is to pool a ride.

An electric, non-pooled, ride-hailing trip can cut emissions by about 53%.

The double-whammy for reducing urban climate emissions is to pool rides in an all-electric Uber or Lyft, which cuts emissions by about 68% compared with a private vehicle trip in the average gas car, with an average of 23.8 miles per gallon. (Of course, many Uber and Lyft cars are not that efficient.)

It’s going to take some work to realize UCS’s recommendation. The California Air Resources Board reports that riders ask for pooled trips only about 20% of the time. And less than 1% of California ride-hailing trips, based on mileage, were in EVs in 2018.

The UCS study cautions against just hopping in an EV by yourself (whether via Uber or not). Yes, it reduces emissions compared to solo driving in a gas car. But it also results in more congestion – and more pollution from other cars, bikes, and pedestrians that are slowed down in that congestion and noise.

Don Anair, who led the research for UCS, told Electrek:

We’re looking at a future when there’s going to be increased travel. How is that done in a sustainable way? Electrification is one key piece, but it’s not the only thing.

You need to move more people with fewer vehicle miles. And that’s where there’s potential for better pooling. You can increase pooling occupancy and do it more efficiently. That’s where we need to head. 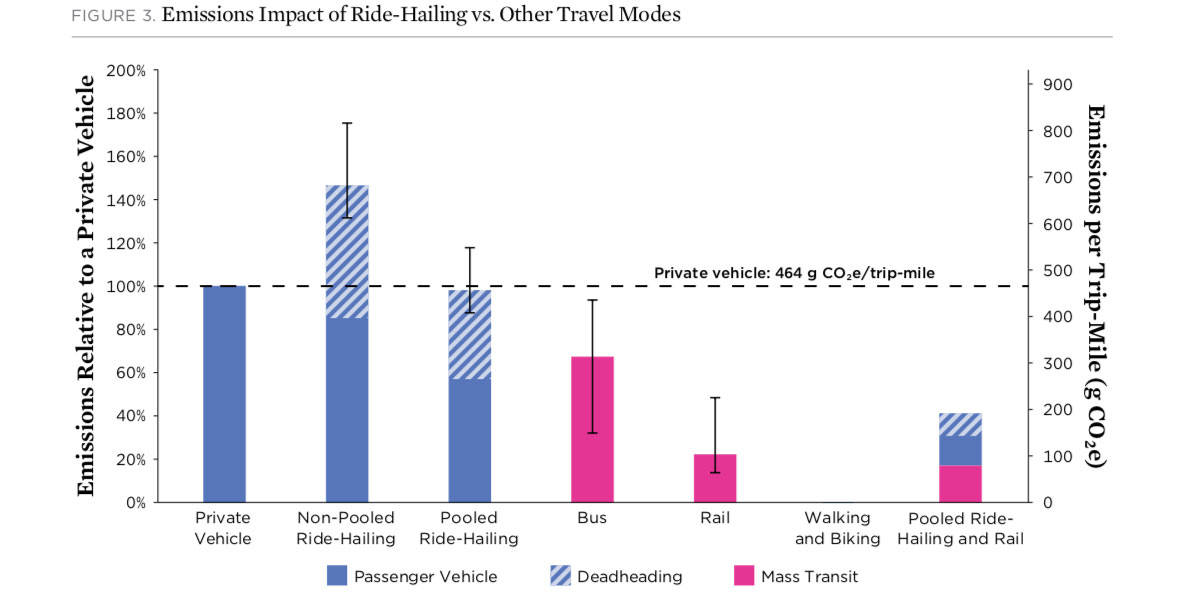 UCS is calling on the ride-hailing industry to take strong action to promote ride pooling, to electrify its vehicles, and to facilitate connections to mass transit. That includes providing increased access to quick-charging (including with direct investments in chargers) and to help drivers buy or lease EVs.

Anair, who serves as the deputy director of the UCS Clean Vehicles Program, acknowledged that DC fast-charging today would slightly increase fueling costs for a ride-hail driver compared to operating an efficient hybrid. But it would equate to only about 20 cents per trip, including the so-called downtime. Anair goes into detail about the economics in a recent blog post. He told us:

If you’re taking advantage of federal or state tax credits, and you’re charging at home, the numbers look good. And if you have a 200- to 250-mile range vehicle, you’re not going to be relying on charging during the workday.

Most trips are short. 200 miles a day is going to cover a lot of drivers.

He also argues there’s a business opportunity for charging companies and ride-hailing companies to collaborate on maximizing the usage of fast-charging investments. Ride-hailing provides a great chance to schedule charging or otherwise use that charger more efficiently.

The future of mobility is electric, shared, and (over time) increasingly automated. If the goal is reduced emissions and congestion, those things go hand-in-hand.

We mentioned that vision – one that takes us beyond personal-vehicle ownership – this week when discussing Ford-backed Argo’s plan to use hybrids instead of EVs for its future robotaxi service. We later learned that it’s up to Ford to choose the powertrain.

Anair said that AV companies wanting non-stop, 24/7 utilization of fleets, if deployed today, would face some downtime for all-electric robotaxis to recharge. “That’s probably true. But are hybrids a good decision for the future? No. I think it’s short-sighted.”

Of course, personal cars are not going away tomorrow. And robotaxis are not arriving next week. Nonetheless, Elon Musk himself posited the holy grail of mobility as a shared-fleet of all-electric, self-driving vehicles.

Let’s leave aside Musk’s optimistic timelines about autonomy for now. As the Union of Concerned Scientists reveals in its new report about electric and shared ride-hailing, we can immediately shift more of urban trips to zero emissions ­– and cut the impact of those rides further by sharing the cabin with other riders.