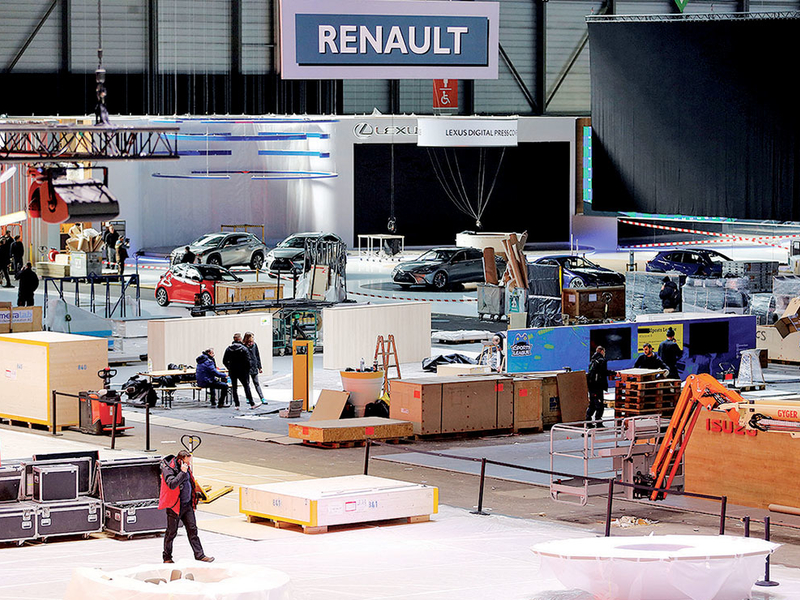 Automakers are counting the cost of the sudden cancellation of the Geneva auto show last week in response to health threats from the coronavirus epidemic.

The decision, reached just four days before the annual event was to open to the media Tuesday, March 3, came as Swiss authorities called a halt to all gatherings of 1,000 people or more.

Aside from the lost opportunity for 160 automotive companies to shine in what is annually a celebration of luxury vehicles, sports cars, exotic brands and bold, new styling trends, there is another certain repercussion: The cancellation is one more blow to the tradition of glitzy worldwide car shows.

Some automakers in recent years have been retreating from the expense and fuss of major auto shows from Detroit to Tokyo, events where attendance once was viewed as required for competitors showing off their latest achievements.

Even before the plug was pulled late last week, Geneva, Europe’s leading annual car show, was already down on participants based on decisions by Ford, Jaguar Land Rover and Nissan to skip what would have been its 90th year.

The cancellation also comes as a blow to the numerous exotic and niche brands that count on the Geneva show’s ability to attract the rich, even when those brands aren’t present at other auto shows.

“Yes, it’s going to affect us,” said Steve Young, CEO of retro British sports car maker Morgan. Last year, Morgan took 60 orders for its new Plus Six roadster on the first day of the Geneva show. The automaker was hoping for a similar result after unveiling a new, less expensive sports model.

An official with one large brand, who asked not to be identified, told Automotive News Europe that it spent approximately $6.6 million on its stand at Geneva, most of which was already built by the time the cancellation came.

Morgan didn’t spend anything like that, Young said. But the amount it did lose is a “significant percentage” of the small company’s annual marketing budget.

He made the comments while in the process of trying to file an insurance claim for the loss.

No exhibitor will be reimbursed by the Geneva show itself, as organizers are invoking a force majeure clause that protects the show against financial claims.

Only consumer admission tickets will be fully reimbursed. In the past three years, Geneva has attracted between 600,000 and 700,000 visitors annually.

Bentley instead will debut the vehicles via a streamed press conference this week from its headquarters in Crewe, England. CEO Adrian Hallmark had planned to attend the Geneva show, along with other executives from his management team.

“Bentley welcomes the decision of the Geneva State Council to cancel this year’s Geneva Motor Show,” the automaker said in a statement. “This is a decision in the interests of the health and safety of all participants and our colleagues.”

Maurice Turrettini, chairman of the company that puts on the Geneva International Motor Show, said canceling it will also hurt the Geneva economy. Turrettini said at a press conference that the cancellation will represent a local economic hit of $200 million to $260 million.

The development prompted many show observers to buzz on Twitter about the decision-making process. Some argued that the cancellation could have come sooner.

The virus, which originated in China, had already reached into Europe and caused Italian authorities to shut down areas and roads in northern Italy, on Switzerland’s southern border. Italy’s moves affected the offices of the Volkswagen-owned Italdesign in Turin.

Coronavirus cases had begun to appear in Switzerland.

On Wednesday, Feb. 26, two days before the cancellation, the auto show released a statement that the show would go ahead — but with advice that visitors should “maintain at least 3-feet distance between you and anyone coughing.”

Despite that reassurance, Kia pulled its Korean executives out of the show, and infotainment supplier Harman International pulled out altogether.

By Thursday, Feb. 27, as epidemic worries and media buzz escalated, it was clear that a game of brinkmanship was developing among the show, its exhibitors and the Swiss government as to who would act first.

In the end, the government made the call to ban gatherings of more than 1,000 people until March 15, the day the show was to conclude. Because of that official order, the show was able to claim force majeure and step free of exhibitor contracts without penalty.

“We will follow that recommendation. We are at the end of the chain,” said a spokesperson for Palexpo, the large exhibition center where the Geneva show takes place.

“We regret this situation, but the health of all participants is our and our exhibitors’ top priority,” Turrettini said in a statement.

Asked about compensation for exhibitors, he replied: “We are in a state of force majeure, so a claim against the auto show will not have success. There are no refunds or litigation possible.”