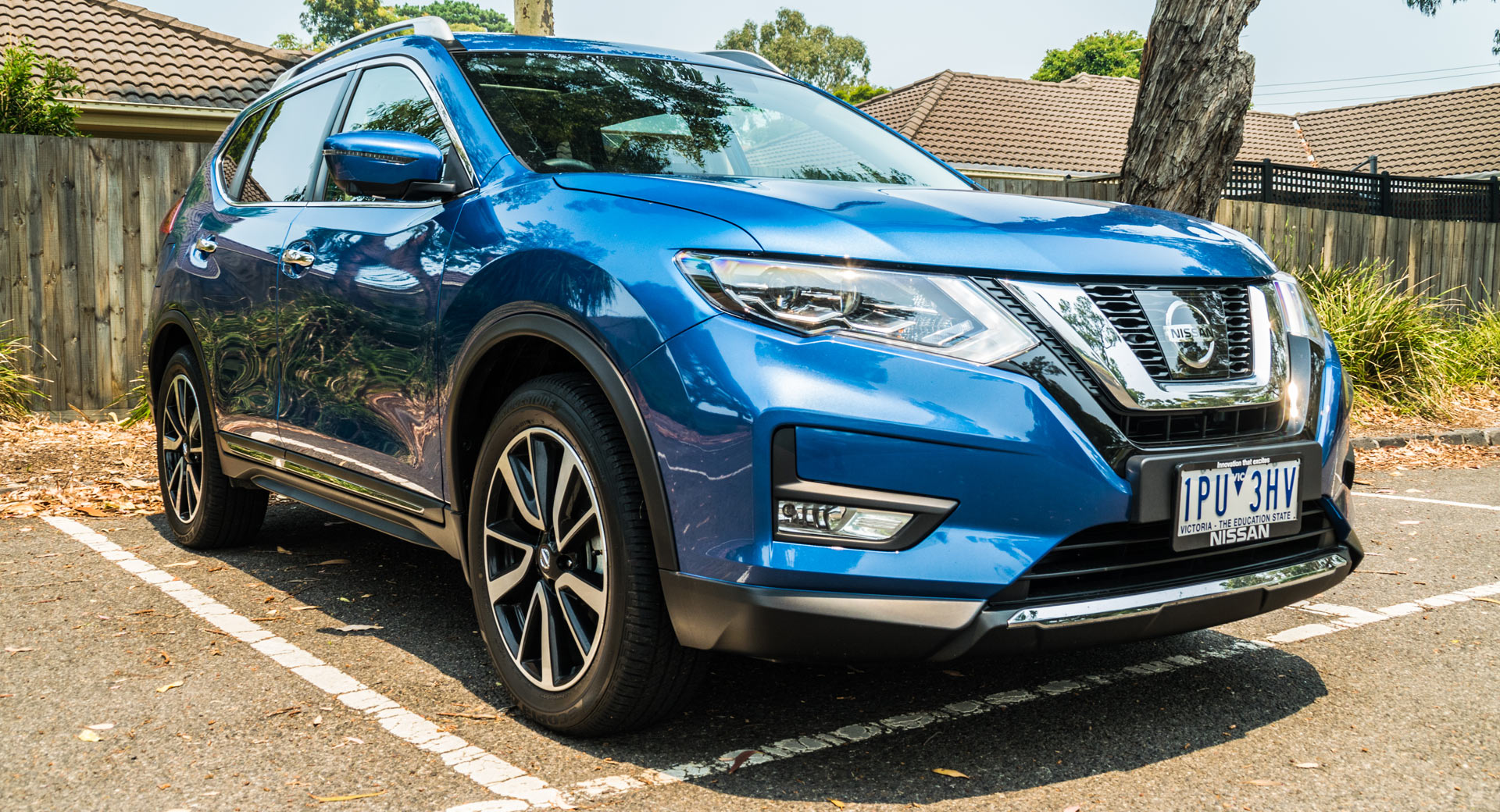 The first- and second-generation Nissan X-Trails were both boxy vehicles with opinion-splitting looks meshed together with impressive features and rugged versatility. In late 2013, the crossover, which is marketed as the Rogue in North America, was overhauled for its third-generation where it adopted a far more stylish and modern appearance.

Fast forward six years and this model is still in production and with the exception of a mid-life facelift in 2017, hasn’t really undergone any significant modifications. How is it to live with? We spent a week with one in January and found out, not long before an all-new generation model lands. 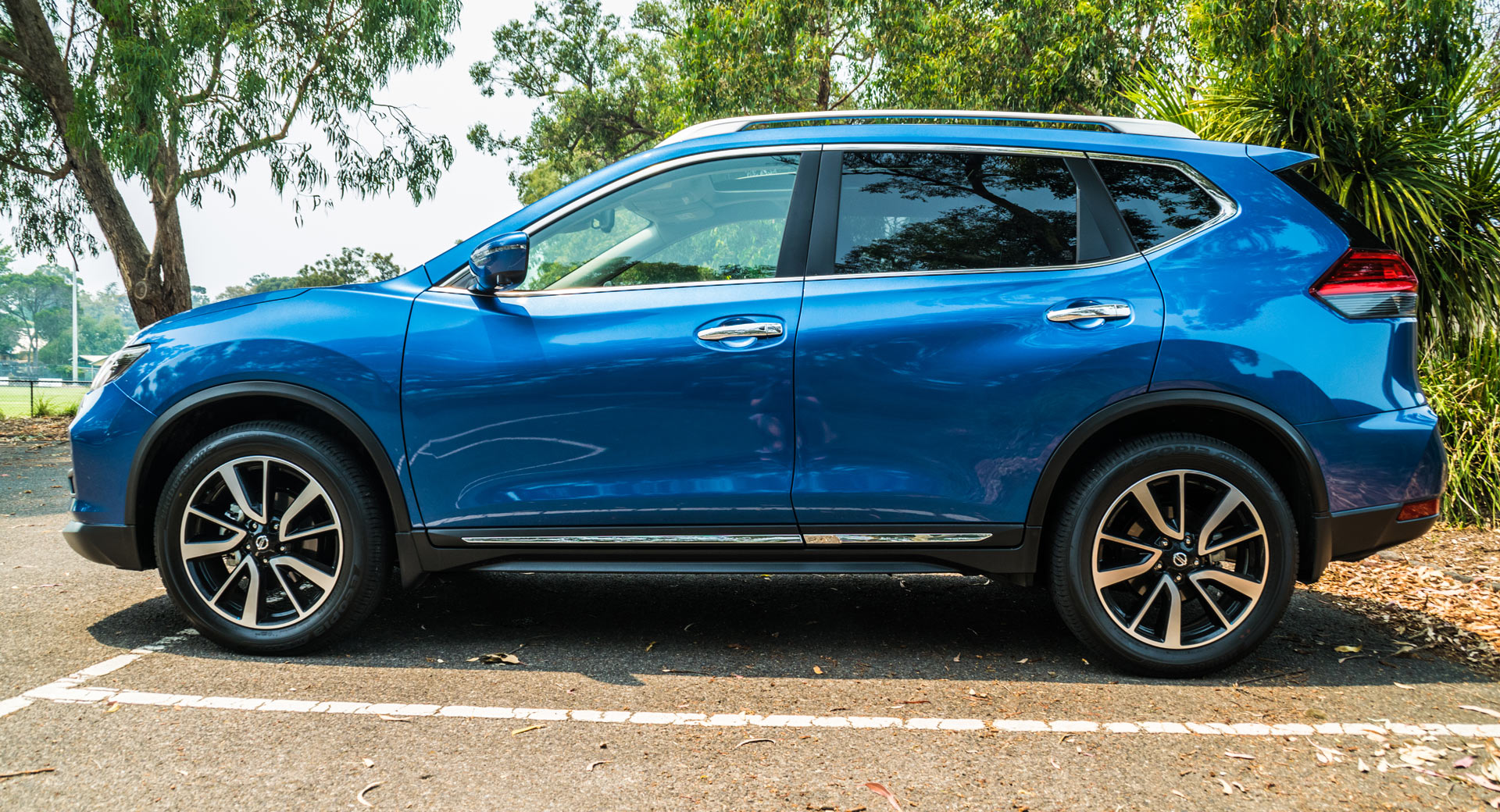 Nissan Australia loaned us a 2019 X-Trail Ti model. Powering the vehicle is a 2.5-liter four-cylinder petrol engine with 126 kW (169 hp) and 226 Nm (166 lb-ft) of torque. Coupled to this engine is a CVT that sends power through an all-wheel drive system offering a number of different driving modes. The engine is good for 8.3 liters per 100 km (28.3 mpg) and during our testing, we discovered that fuel consumption figure was bang on.

Before diving into those modes, the engine and transmission combination are worth discussing in a little more detail. On its own, the engine itself is decent enough. It is not the smoothest four-cylinder on the market but is one of the best all-rounders in the segment and has enough get-up-and-go for everyday use. It’s a little noisy, especially when you apply more than half throttle, but is great for highway cruising. 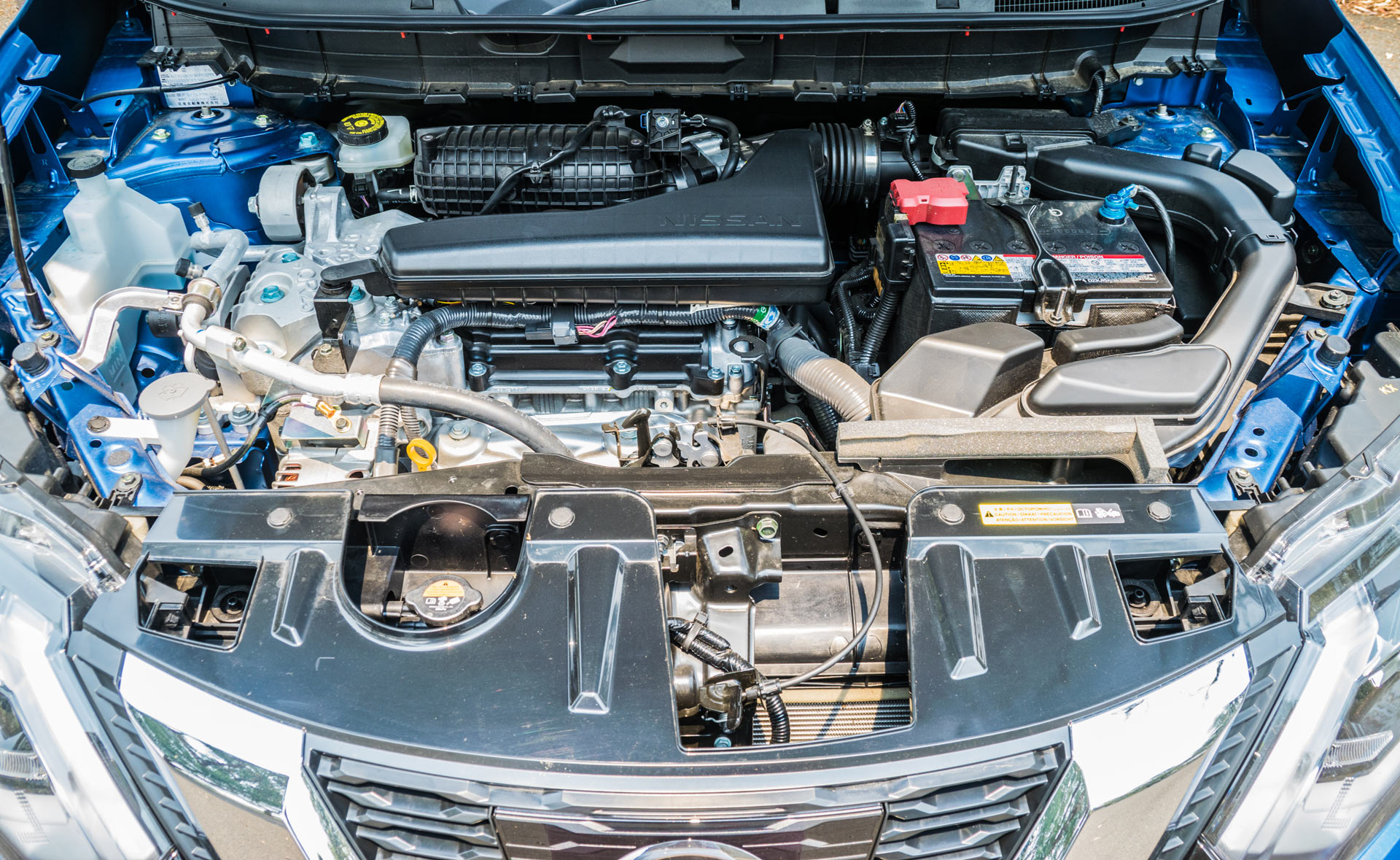 Then there’s the CVT. Some people love CVTs, some people hate them, although most can probably agree that it’s hard to find an exceptional one on the market. How does Nissan’s stack up? Well, it does a respectable job of funneling the engine’s power to the pavement, but it does have its issues, as all CVTs do. For example, it can come across as a little befuddled in certain situations. It is a shame that the dual-clutch offered with the X-Trail in some markets isn’t available in Australia because we’re sure it lifts the entire powertrain package to another level.

Being that the Nissan X-Trail is positioned as a somewhat ‘rugged’ SUV in a similar vein to the Subaru Forester, there are three different settings for the all-wheel drive system to suit various driving conditions. For day-to-day driving, the SUV is best kept in 2WD mode where all of the power is sent to the front wheels except in the event of the car detecting a loss in traction. If this happens, the rear wheels will also be sent some power.

Next, there’s an ‘Auto’ mode that enables the all-wheel drive system and last but not least, there is ‘Lock’, a mode limited to 40 km/h (24.8 mph) that evenly splits torque between the front and rear wheels. Not all SUVs that compete with the X-Trail offer such a complex and capable system, making the Nissan a compelling option for those who can benefit from such added versatility. 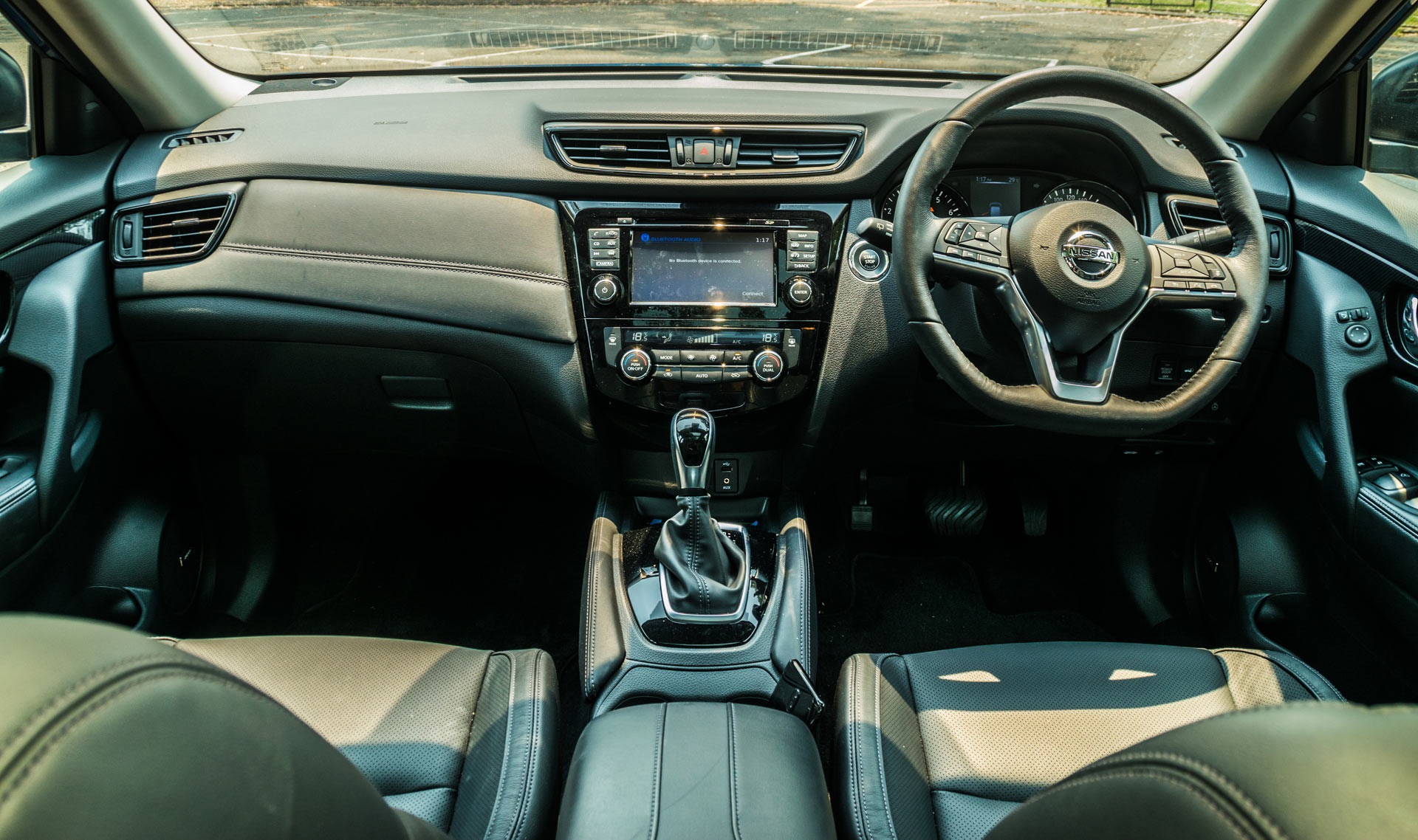 The cabin of the X-Trail is a nice place to spend time and what immediately strikes you about the interior is just how practical it is. This is particularly evident in the boot where the SUV can swallow up 565 liters (19.9 cubic-feet) of cargo with the second-row seats in their upright position and 945 liters (33.3 cubic-feet) with them folded down flat.

What’s especially appealing about the layout and design of the boot is that it features a false floor with two panels that can be removed. Beneath these panels are plastic storage compartments, perfect for storing wet clothes if you’d had a day at the beach, for example. One of these storage cubbies also fits the removable cargo cover. Why so many other SUVs don’t offer an area to store the cargo cover is beyond me. 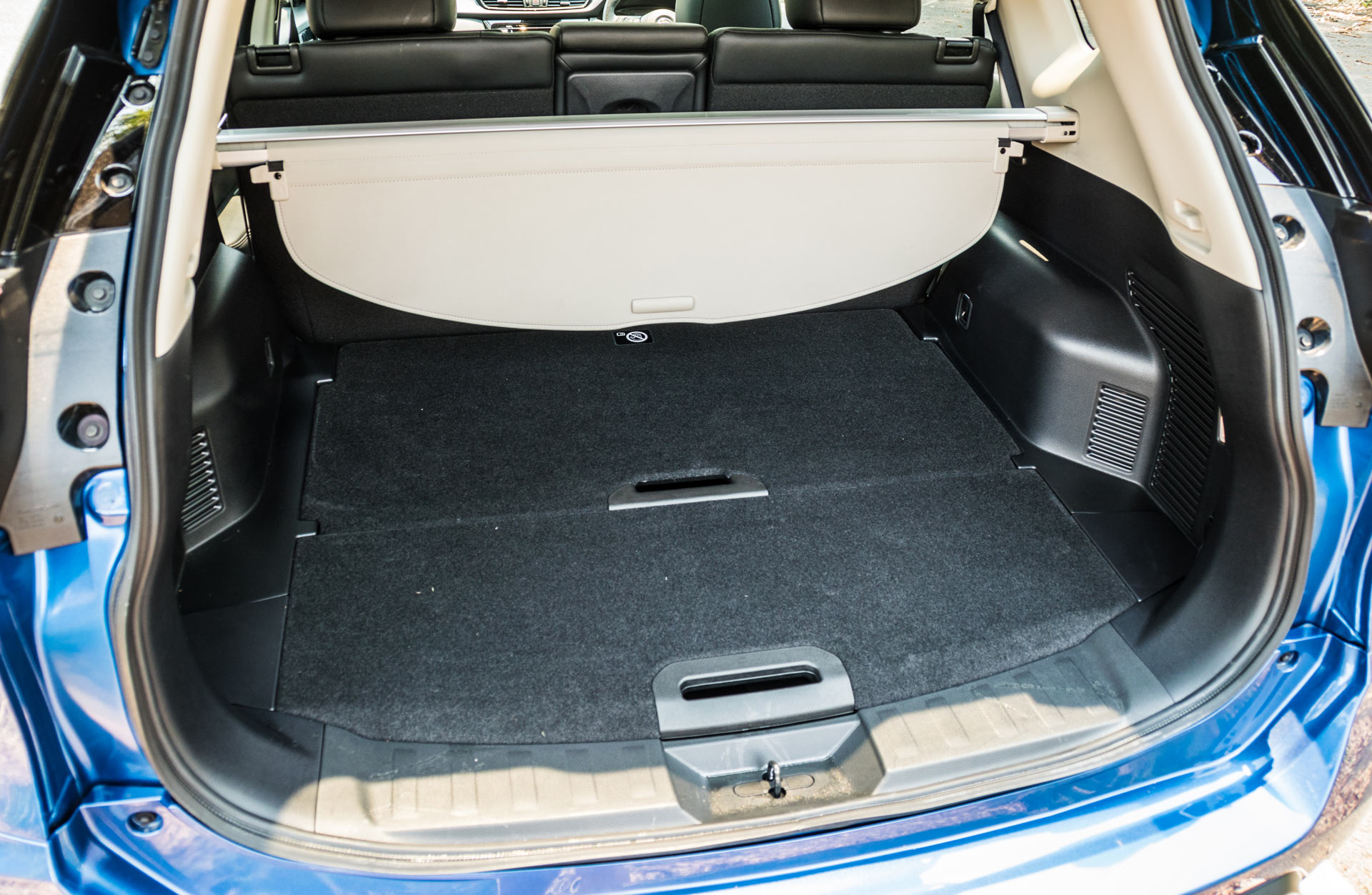 Up front, the X-Trail is a nice place to sit and in Ti form, is clad in a number of black leather parts and black hard plastics. One of our favorite features was the little air vents in the cupholders to keep your drinks cool. Heated seats also come standard as does a USB port and a 12-volt socket. Other welcome inclusions include a lovely square-bottomed steering wheel and a panoramic sunroof. The 7-inch infotainment system is a bit of a disappointment, however, and feels outdated compared to what’s available in the X-Trail’s rivals. 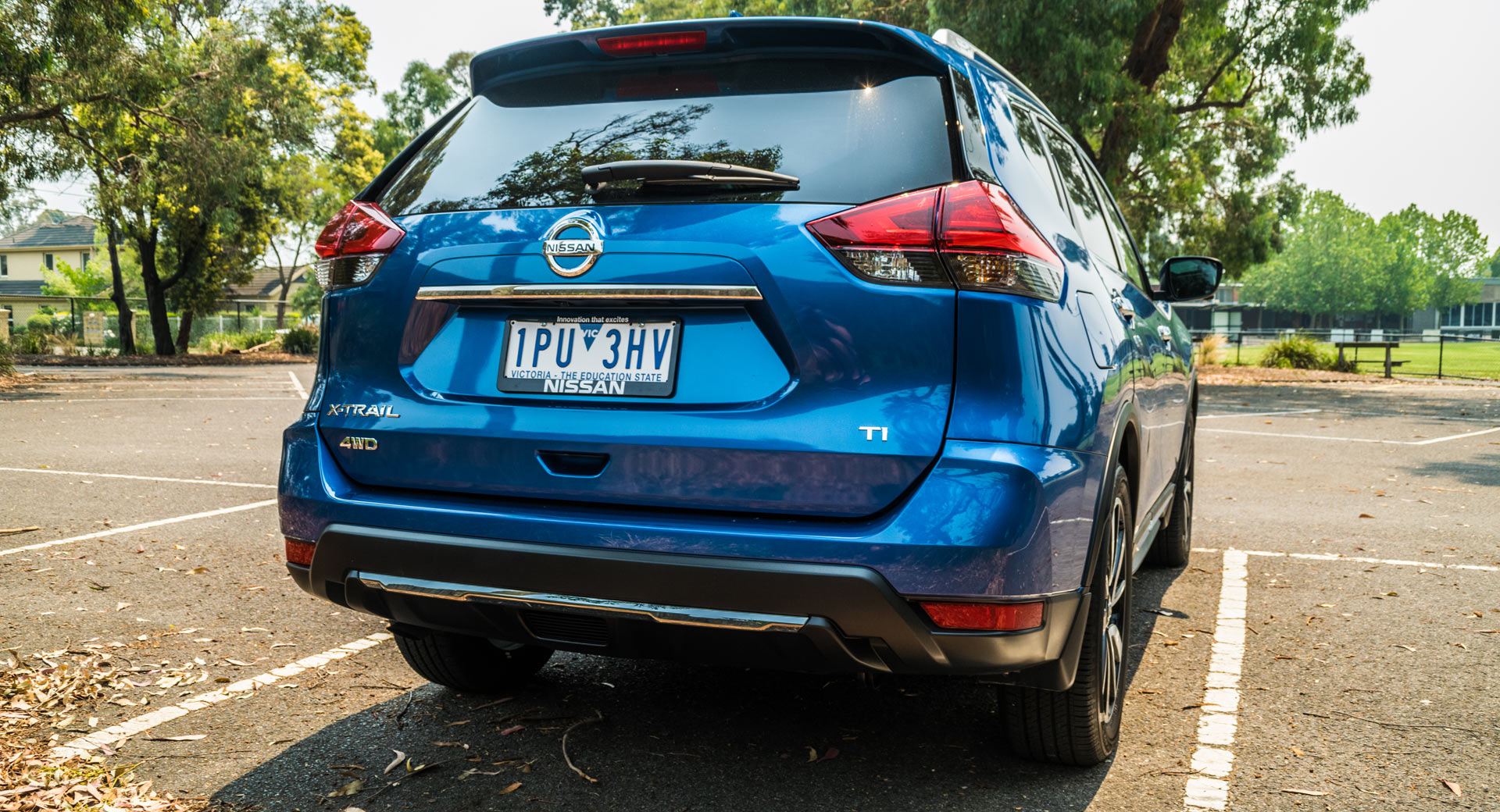 Externally, the 2019 X-Trail Ti is differentiated from lesser variants in the family thanks to bespoke 19-inch black and silver wheels, LED headlights, and chrome trimmings on the side skirts. There are also a set of roof rails you won’t find on base models. Another nice feature is the automatic tailgate that pops open if you wave your foot under the rear bumper.

An X-Trail For Every Buyer 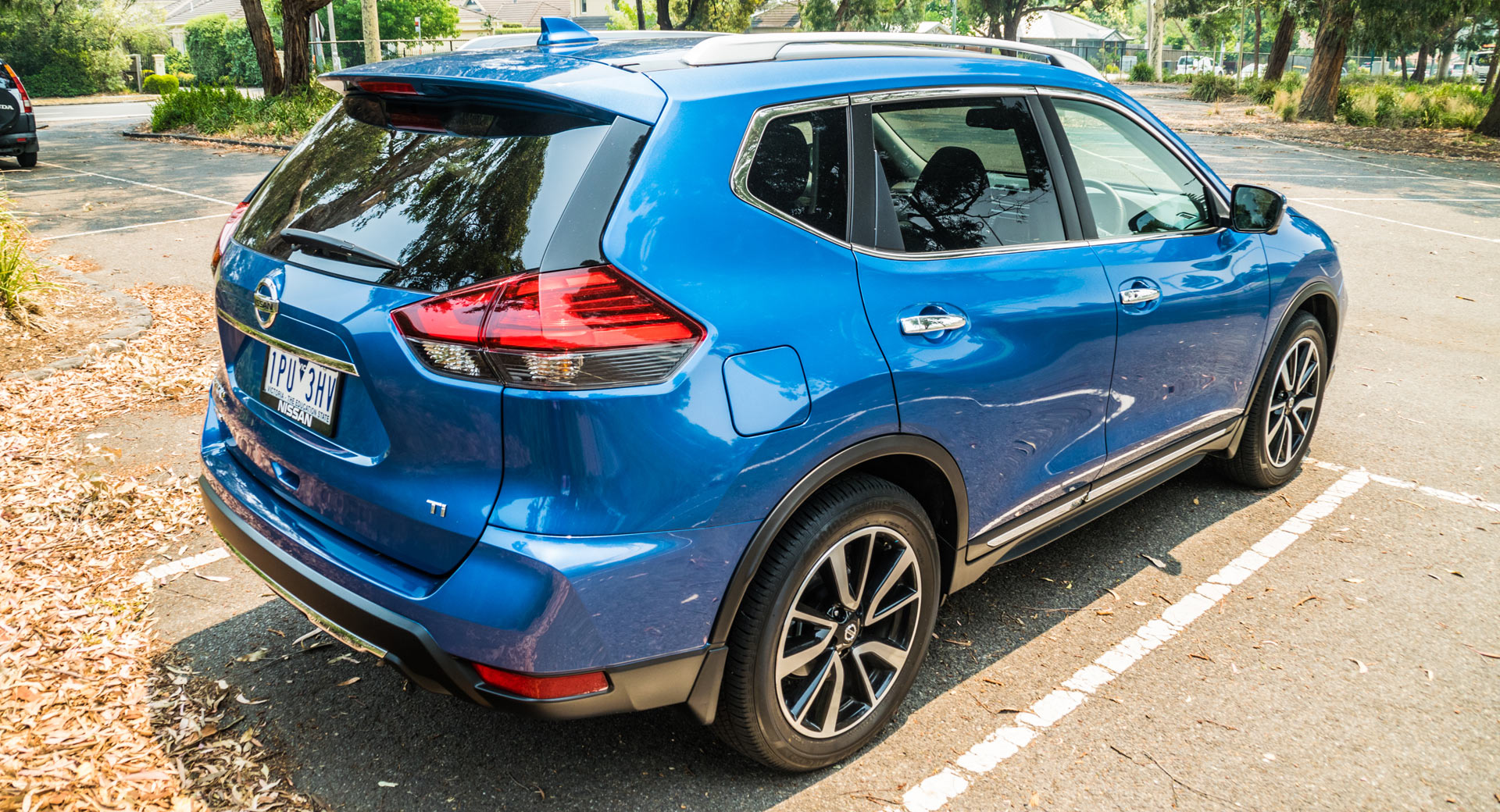 All in all, the X-Trail is a compelling package even though it is feeling a little dated in some regards. Work is currently underway on an all-new generation model that will likely arrive later this year. It’s probably a good idea to wait for it to land before deciding if the Nissan is the right option for you.