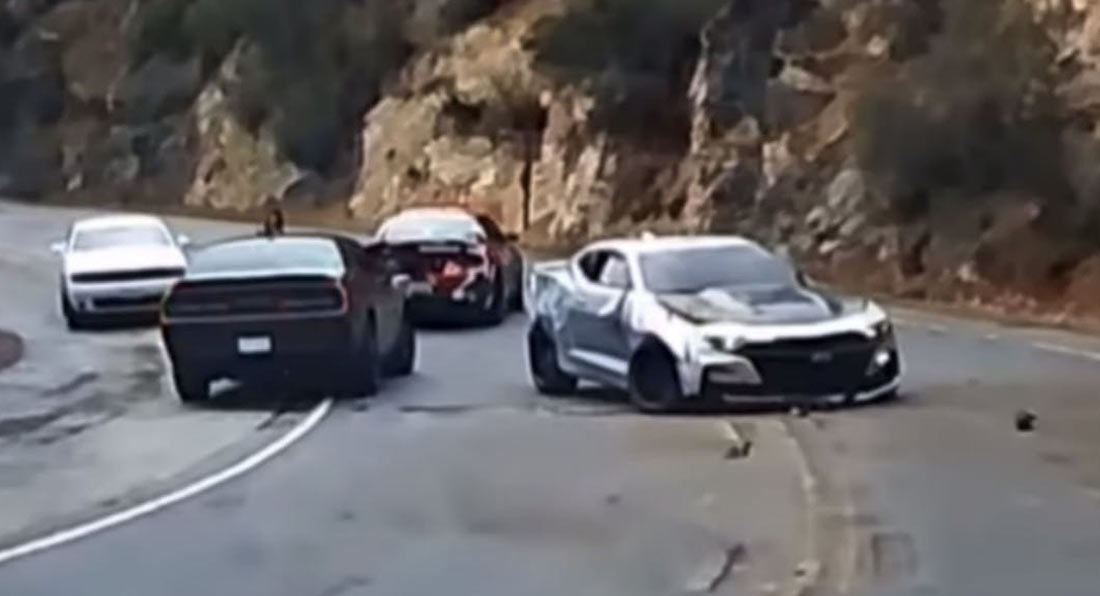 
Update: After writing this article, the video had been moved to private. The screenshot above shows the damaged Camaro.

A Chevrolet Camaro has been left a mangled mess after being chased by police along Angeles Crest Highway in Los Angeles.

Dashcam footage uploaded to YouTube shows the Camaro performing donuts on a large turnoff along the beloved canyon road. Dozens of other muscle cars can be seen watching on and the cammer was forced to pull over into the turnoff to avoid being collected by the Chevy if trying to continue up the road.

For the better part of 45 seconds, the Camaro smokes up its rear tires before the driver finishes the donuts and re-joins the road and aggressively performs a U-turn directly in front of an oncoming truck. Unfortunately for the Chevy owner, that truck just so happened to be a police truck. The Camaro and the police truck soon turn back into the turnoff but just seconds later, the Chevy driver guns it, attempting to outrun the truck.

Just eight minutes later, the cammer drives back down the canyon and comes across the wrecked muscle car in the middle of the road. Based on all the loose rocks strewn across the road, it looks like the Chevy driver understeered while speeding around the left-hand bend, crashed into the rock wall on the side of the road before slamming back down to the pavement.

The damage sustained to the Camaro looks to be comprehensive. Not only is the front smashed up but at least one of the sides is also and both the passenger-side wheels appear bent and out of place, indicating serious suspension damage. It seems apparent the car will be deemed a write-off.

It remains to be seen if the Camaro driver and any possible passengers were injured and if they were arrested by police.