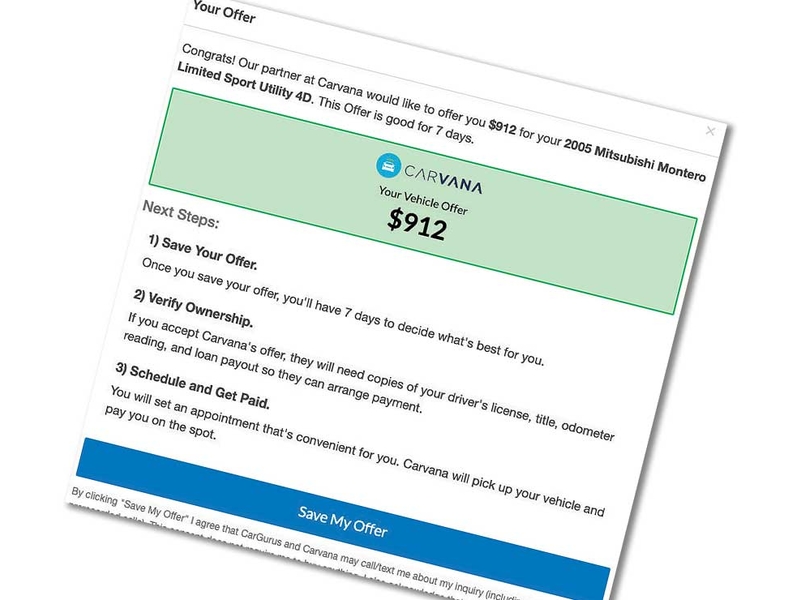 CarGurus will soon launch the second phase of a tool to acquire used vehicles from customers, after the first phase — done in conjunction with Carvana — led to dealer backlash.

While it wasn’t clear at press time when the new phase will start, the last one appeared to have ended March 5.

That’s about when Dan Sayer, vice president for digital at Nebraska-based Anderson Auto Group, got an email from CarGurus telling him it has pulled a tool that generates instant cash offers to customers for their vehicles from its website. For weeks be- fore it had been removed, Sayer, like others at dealerships, was nonplussed at the way the feature worked.

“Initially I was in a little bit of disbelief that Carvana was coming up,” he said.

The button on the website led to a form that asked for basic vehicle information, then returned an instant cash offer, which dealers said came exclusively from Carvana. On March 4 and 5, when Automotive News tested the feature with at least five VINs, each turned up an offer from Carvana. Clicking another button would send users to Carvana’s website, and users could click to receive email updates from the digital retailer.

On Monday, March 9, CarGurus announced on its website that it had ended that phase of the test. “As a result of your feedback, we’ve removed Carvana from all of our cash offers testing,” the company said. “The next phase of cash offers testing will be with a broader set of dealers.”

In the interim, many dealers were incensed. In a Feb. 21 webinar for dealers, CarGurus COO Sam Zales sought to calm nerves.

“One of the biggest pain points we hear in the marketplace is that an access to inventory for dealers is really difficult,” he said. CarGurus, meanwhile, has access to 38 million visitors coming to its site, Zales said. And with some consumers showing “seller’s fatigue” with peer-to-peer marketplaces such as Craigslist, the company spotted an opportunity.

Zales said CarGurus initially did a “pre-alpha test” with an unnamed national brick-and-mortar account. But he said the company realized it needed a more “real-time process” with advanced technology, and the ability to offer firm, binding bids to consumers for buying their vehicles.

“So we went to Carvana, a player that we knew had this technology and would enable us to continue to move to ‘alpha test,’ to test that program and see if it worked over time,” he said. “I’m pleased to say we have now come out of alpha; we’re moving to beta, which means we go to a next set of dealers.”

He added that CarGurus would soon announce another large brick-and-mortar partner for the tests.

Once the product gets through beta testing it will be available for more dealers, and the company was soliciting applications from dealers to be part of the beta test, so long as they could give real-time, binding offers.

“What I get frustrated with is they took thousands of dealers that were loyal to them and set them aside in favor of one national client,” said David Kain, president of Kain Automotive.

Kain said he had been fielding calls from upset retailers, and the cash-offers-from-Carvana tool became a cause célèbre of some dealer 20 groups.

“Acquisition of used cars is obviously a big issue for dealers,” Kain said. “And so what we are concerned about is when the CarGurus technology plays favorites with Carvana, and they take what is notably landscape that dealers have paid for online and basically make it a direct link into Carvana.”

Carvana declined to comment. The online used-vehicle retailer has made it clear it is pursuing more customer cars for acquisition, as are many dealers in the U.S., as auto retailers seek to capitalize on a hot used market. Customer-sourced inventory typically carries higher margins, because those vehicles cost less to source.

Carvana said in its fourth-quarter earnings report that it bought more than 104,000 cars and trucks from consumers in 2019 vs. about 31,000 the year before.

The company invested about $60 million in operating costs to support growth in car purchases from consumers, most of which went toward advertising its program.

In an earnings call last month, Carvana CEO Ernie Garcia said the company’s some 35,000 vehicles listed for sale on its site had grown and become more diverse, a “tremendous development” in its model.

Garcia and CFO Mark Jenkins talked about how the company could “collapse” some of the consumer car-trading marketplace to make it more efficient.

Suzanne Laine, digital marketing manager at Chandler Chevrolet, viewed those comments and the test with CarGurus as another swipe at traditional brick-and-mortar dealers. It’s especially jarring, she said, to a dealership in small-town Madison, Ind., where several mom-and-pop grocery stores have closed amid a general trend that seems to favor large national retailers. “Now all we’ve got is Walmart and Kroger,” Laine said.

“Car dealers notoriously contribute back to their communities,” she added. “So it just kind of smarts to think that this company is actually trying to collapse that.”