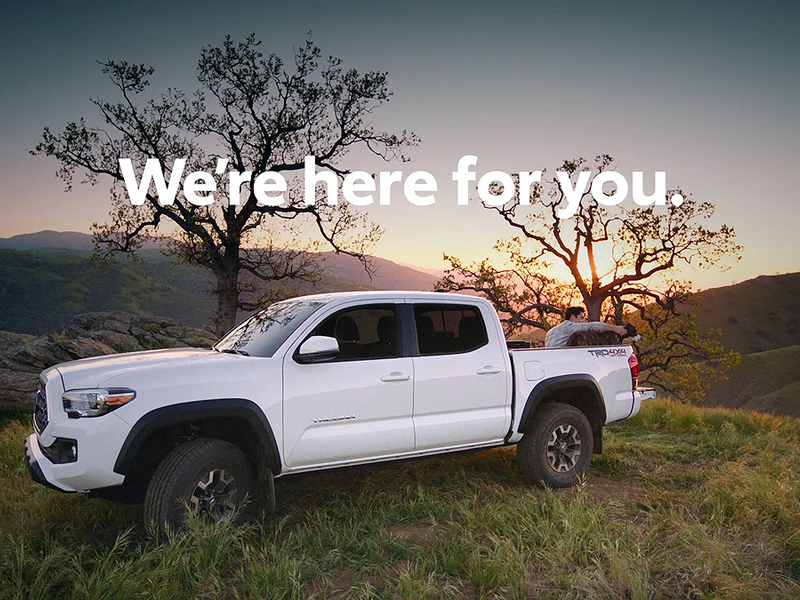 Toyota will debut a new national advertising campaign with a gentle, optimistic message aimed at reassuring its customers as the coronavirus pandemic rages across the U.S.

The 30-second commercial, which will begin airing in different media markets beginning Saturday, is titled “We are here for you,” and was produced by Saatchi & Saatchi, Toyota Motor North America’s agency of record for its top-tier advertising.

The commercial transitions from a series of panoramic landscapes into images of families and people helping one another, before ending on images taken inside an open Toyota dealership. Asked about the lack of proper social distancing in the ad, Ed Laukes, head of marketing for TMNA, told Automotive News that all of the video used in the spot was archival.

“The message is speaking to the Toyota family, whether it be our Toyota customers, or our dealers, or our team members or folks that are working in the store or even people that love the brand for whatever reason, that this is a time to embrace your family, make sure that everyone is safe and healthy, but that there are better times ahead,” Laukes said.

Toyota Motor Corp., like most automakers operating in North America, on Thursday said it would idle all production on the continent beginning Monday, until April 6.

Laukes said Toyota has pulled down its previous March sales event national messaging and said now was not the time to focus messaging on sales.

Laukes said the spot is the first in a broader campaign that Toyota is developing that will keep an optimistic tone to remind people that there are better days ahead. However, there are difficulties in broadening the campaign because of the differences in how communities are dealing with the coronavirus crisis, Toyota’s marketing chief said.

“We’re working through what we would call a phase two approach for right now that would be positive and warm. The big challenge that we have is the dynamics from coast to coast are so different” and so fluid, Laukes said.

“It’s not like you can build a campaign that is necessarily going to be effective in Los Angeles or California that is the same as what’s going to be in Iowa or Ohio, because the dynamics of the situation currently are not the same. So that’s the one thing that we have to work out behind the scenes to try to make sure that this campaign is as fluid as possible.”