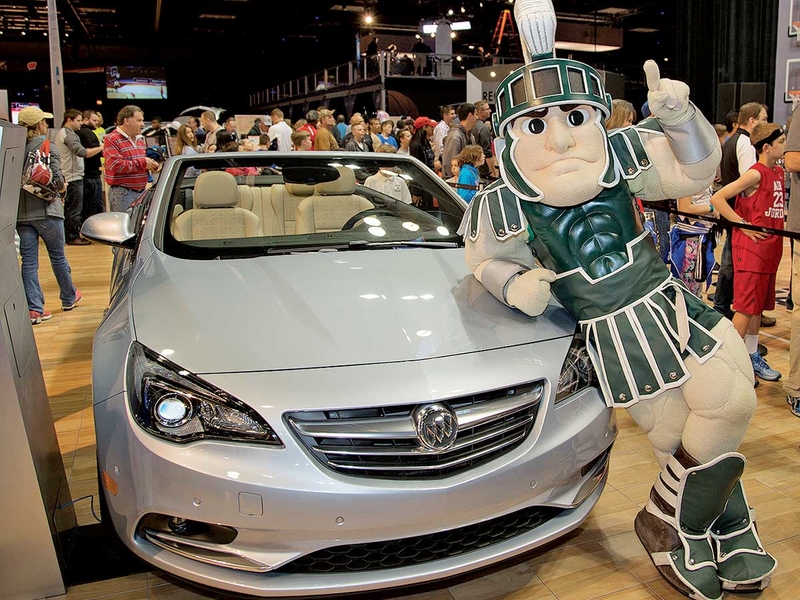 The coronavirus outbreak has toppled several huge marketing platforms for automakers in the sports arena and Hollywood.

Buick is a corporate partner of the NCAA that leveraged the March Madness spectacle to highlight its vehicles with TV, digital and experiential outreach. Nissan Motor Co. also is a sponsor. The company has used Infiniti for the basketball sponsorship, but this year, the Nissan brand swapped spots with its luxury stablemate and was to get the full March Madness treatment for the first time.

But that stage, which lasts several weeks and reaches an educated, affluent crowd, is gone.

The F9 action flick, the latest installment in the Fast and the Furious franchise known for over-the-top driving antics, was expected to hype the new Dodge Charger Widebody, but the movie’s release has been postponed from this May to April 2021. An FCA spokeswoman said Dodge is working closely with Universal Pictures to determine the timing and next steps in their partnership.

The disruptions are part of a longer list that includes season suspensions by the NBA and NHL, as well as a delayed start for MLB. Without those important marketing avenues, automotive brands will have to regroup and figure out how to move forward in a moment when buying a vehicle will take a back seat for consumers dealing with layoffs and economic uncertainty.

Whatever messages brands decide to send during this crisis, the delivery will be key.

“You have to strike the right tone and balance,” Lara Koslow, a Boston Consulting Group partner, told Automotive News. “It isn’t a go-down-the-street-to-the-dealer moment.”

Koslow added that pushing a “buy now” theme would feel off in this environment.

Some automakers are pulling back on showing off the metal and instead telling consumers that they’re here to make their lives easier during a turbulent time.

Ford Motor Co. has pulled its national advertising campaigns promoting vehicles in favor of spots that focus on its coronavirus response through its lending arm. The two ads, which direct viewers to the website fordcreditsupport.com, tell those leasing or financing through Ford Credit that the company is there to help if they’ve been impacted by COVID-19.

A survey from Ace Metrix, a company that measures consumer reactions to commercials, found that 58 percent of people reported a positive change in perception of Ford after viewing the coronavirus spots. The data was based on 546 viewers of Ford’s “Built to Lend a Hand” spot and 500 for an ad titled “Built for Right Now.”

Hyundai has pivoted as well. The Korean brand said it “turned off” its spring sales event campaign in favor of new spots promoting Hyundai Assurance for national and local broadcasts in addition to digital and social channels.

As the pandemic began to threaten the livelihoods of many consumers, the brand said it quickly reinstated its job-loss protection program, which provides up to six months of payment relief for owners who lose their job involuntarily.

The program covers those who finance or lease a new vehicle through Hyundai Capital from March 14 to April 30.

“With the cancellation of sports and other key events, we have lowered our media investment in the short term and plan to reinvest those dollars when we are through the crisis,” Angela Zepeda, Hyundai Motor America’s marketing chief, said in an email.

General Motors hit the right notes during a trying time in U.S. history when it introduced 0 percent financing shortly after the 9/11 terrorist attacks in 2001 with its “Keep America Rolling” campaign, said Ed Williams, vice president of growth and strategy at Kantar, a data and consulting company.

“The tone was perfect. They weren’t pushing cars,” he said. “But they were saying, ‘Look, we know this is tough. We’re here for you. We are open for business. We’re going to do our part to get through this.’ ”

Williams said automakers have to be aware of the “fine line” that comes with advertising during delicate times such as now.

“You want to make people aware that you’re still selling cars, that dealerships are still open,” he said. “But you also don’t want to come across as being self-serving.”