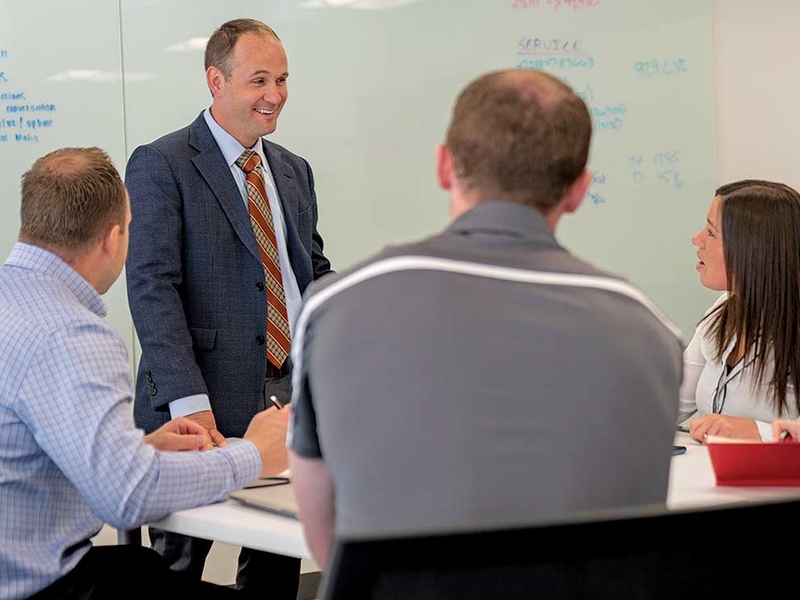 Sales departments across the company’s 14 franchised dealerships in Utah and Idaho work toward the same three annual goals.

A few years ago, each store had a disparate set of goals, but after aligning their targets, front-end gross profit surged 23 percent companywide in 2019.

Gross profit rose “because we set a specific benchmark of where we want to be and how we’re going to push that, and we focused for a full year on that,” said Oliver Young, sales director for the group.

By unifying its goals and creating a centralized process to achieve them, the group also has improved employee retention, its lead conversion rate and sales per person.

Each salesperson’s volume increased about 15 percent in 2019, and appointments scheduled increased 10 percent.

If every store has the same priorities, they work collectively across the group’s stores and share best practices. The collaborative effort has led to a more straightforward strategy, Young said.

“In the past, each store was working on their own little things, but having a narrower focus allows us to move faster,” he added.

This year, the group will continue to focus on numbers per salesperson and conversion percentage, but it also will aim to achieve $75,000 in gross profit per sales manager.

Managers meet every 90 days to discuss ideas and strategies.

“Once they agree, that’s the process that’s implemented. We all stay streamlined with that process,” said Ryan Albert, general sales manager at Young Hyundai in Ogden, Utah.

The goal-setting process simplifies operations for employees across the group, Albert said.

“They haven’t had to focus on too many areas. We can perfect a couple areas at a time,” he said.

Each sales associate at Albert’s store sells about 12 vehicles per month — a high enough volume to reduce turnover.

“When you can eliminate [turnover], gross profit is going to come,” he said. “They will generate conversions on leads because they are seasoned.”

And because each store is held to the same standards and processes, employees can transfer from one to another without having to learn a completely new routine.

They also stand by a companywide mission and are required to carry a card that outlines it: “We take pride in delivering an exceptional customer experience while generating a fiercely loyal following that loves to Think Young.”

The other side of the card lists the group’s foundational pillars: trust and loyalty; work together, rise together; gratitude; engage and support; and value. Having a sign with the mission framed on the wall or in a guidebook isn’t enough to establish the right culture, Young said. A card in each employee’s wallet or pocket keeps the mission top of mind. After the group implemented this policy, employee retention significantly improved.

When dealerships can retain employees, the other goals “fall into place,” Albert said.

The goals themselves didn’t matter as much as a coordinated effort, Young said.

“It’s that we all agreed that they’re the most important things they can focus on,” he said. “Narrowing the focus has helped us get very intentional, and it absolutely helped us immensely.”