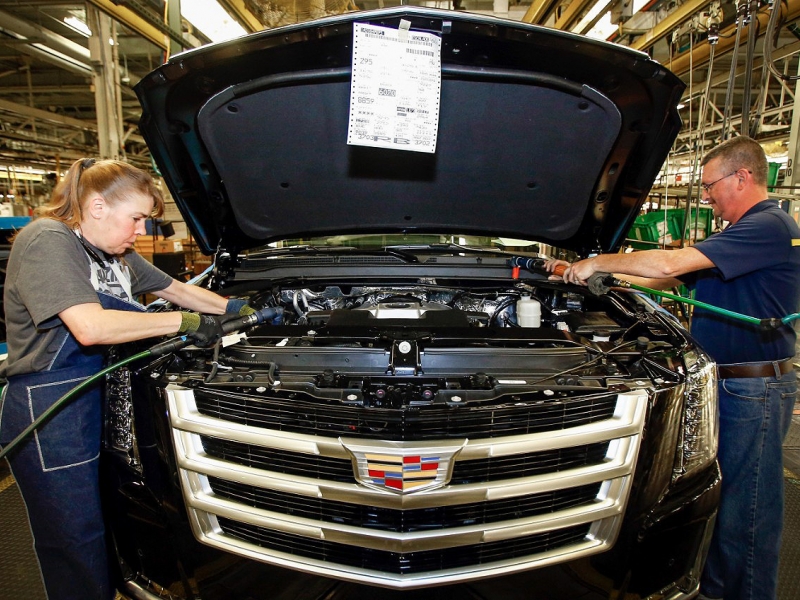 NEW YORK — General Motors is managing a delicate balancing act as it prepared to draw down $16 billion in credit lines while refinancing debt of similar size, facing a longer than expected shutdown of plants and considerable revenue losses.

The automaker gave notice to lenders that it would borrow an existing credit facility almost in its entirety on Tuesday.

But the decision to draw down on the credit lines comes as the company undertakes customary refinancing discussions for $16.5 billion in debt led by JP Morgan.

GM faces a significant loss in revenue because of the shutdown of North American plants that could extend beyond March 30.

“A severe disruption in automotive demand due to the coronavirus combined with the possibility of a follow-on economic recession, will place considerable pressure on GM’s cash flow and credit metrics,” Moody’s said in a report.

GM said it expects to borrow amounts on its revolver as a proactive measure to shore up liquidity and strengthen its financial position due to global market uncertainty from the coronavirus pandemic, according to a filing with the Securities and Exchange Commission.

The company and its lead banks are currently debating the best outcome for both parties through a crisis of unprecedented magnitude that has created a playing field that is much different from the one in which lenders originally committed to lend.

On Wednesday, Congress reached an agreement on a $2 trillion economic stimulus bill to alleviate the economic impact of the coronavirus outbreak. The much-anticipated spending bill does not make specific mention of automakers, but sets aside $454 billion to make loans or loan guarantees for companies across all sectors, according to Reuters.

“They want to show liquidity,” a banking source said. “In order to qualify for the government bailout you need to keep your employees on the payroll.”

Companies use revolving credit facilities, known as revolvers, as backstop financing in case short-term commercial paper lines that cover expenses such as payroll fail to roll over. Borrowers can draw down, repay, and re-borrow these funding lines at will. For the most part, these facilities pay low rates and remain undrawn.

But as the coronavirus crisis intensifies in the US, more and more companies are tapping credit facilities to strengthen liquidity in case cash dries out.

“You have made a commitment to a company that you don’t know how it’s going to look like in three months, six months,” the banking source said. “Every company is now a different company. This situation is unprecedented. It’s a game changer for the entire market.”

GM could go ahead with the transaction as it was originally offered, reduce the overall size of the financing, or address only near-term maturities, three banking sources said.

The company has two upcoming maturities, including a $4 billion, three-year loan and a $2 billion, 364-day loan, both set to mature in April 2021, according to a second filing with the SEC.

GM may ultimately decide to put the refinancing on hold, the three banking sources said.

The carmaker also has a $10.5 billion credit facility that matures in April 2023.

The debt refinancing was meant to extend maturities, but leave pricing unchanged. It’s an exercise the carmaker performs every two years, according to bankers.

The deadline for commitments was Wednesday. Target closing for the financing is mid-April, the banking sources said.

GM drew down on its revolving line of credit to ensure it had access to those funds during this uncertain situation, a GM spokesperson said in an email.

The company, which prior to the draw was projected to have between $15-16 billion in cash on its balance sheet at the end of the quarter, did not have any immediate cash needs when it made the decision, the spokesperson said in the email.

GM’s decision to borrow as early as Friday comes on the heels of a similar move by rival Ford Motor Co. that canceled a debt refinancing transaction after it also disclosed plans to draw down on its credit facility, two banking sources said.

In February, Ford also asked its JP Morgan-led bank group to refinance $15.4 billion in revolving credits but in March decided to draw down on the facility and postponed its refinancing plans as market conditions deteriorated, two banking sources said.

Ford drew $13.4 billion under a corporate credit facility and $2 billion under a supplemental credit facility, for a total of $15.4 billion. The borrowings will be used to “offset the temporary working capital impacts of the coronavirus-related production shutdowns and to preserve Ford’s financial flexibility,” according to a March 19 Ford statement.

Ford has said it would revisit its refinancing plans as early as September, two banking sources said. GM could decide to do the same, they said.

On Wednesday, Moody’s downgraded Ford further into junk territory, cutting the company’s rating to Ba2, from Ba1, citing “the severe shock of the coronavirus pandemic combined with Ford’s already-weak operating performance and a years-long restructuring that is a drain on cash flow.”

Fitch on Monday cut Ford’s credit rating one notch to BBB- with a negative outlook.

A Ford spokesperson referred questions to the March 19 news release.

Because of their heavy reliance on global supply chains, automakers are one of the sectors expected to be hit hardest by the coronavirus.

Ford, GM and Fiat Chrysler Automobiles have idled North American plants to stop the spread of the virus, bowing to pressure from the UAW, which represents about 150,000 hourly workers at the companies.

On Monday, trade groups representing automakers including GM, Volkswagen Group and Toyota Motor Corp. said in a letter to congressional leadership that Congress should set up facilities to provide loans and loan guarantees to large employers, medium-size manufacturers and small businesses facing revenue losses due to COVID-19. The trade groups expect retail sales to be down by as much as 40 percent in March compared to the same month in 2019.

GM and Ford join a list of companies that have funded credit lines in order to boost liquidity and preserve financial flexibility in light of the coronavirus pandemic. Lenders have been acquiescing to the borrowing requests so far.

GM has a separate $3 billion, three-year revolving credit line that is not part of the refinancing effort.

As of December 31, GM had $17.3 billion in cash available under credit facilities and total available liquidity of $37.2 billion, according to the second SEC filing.