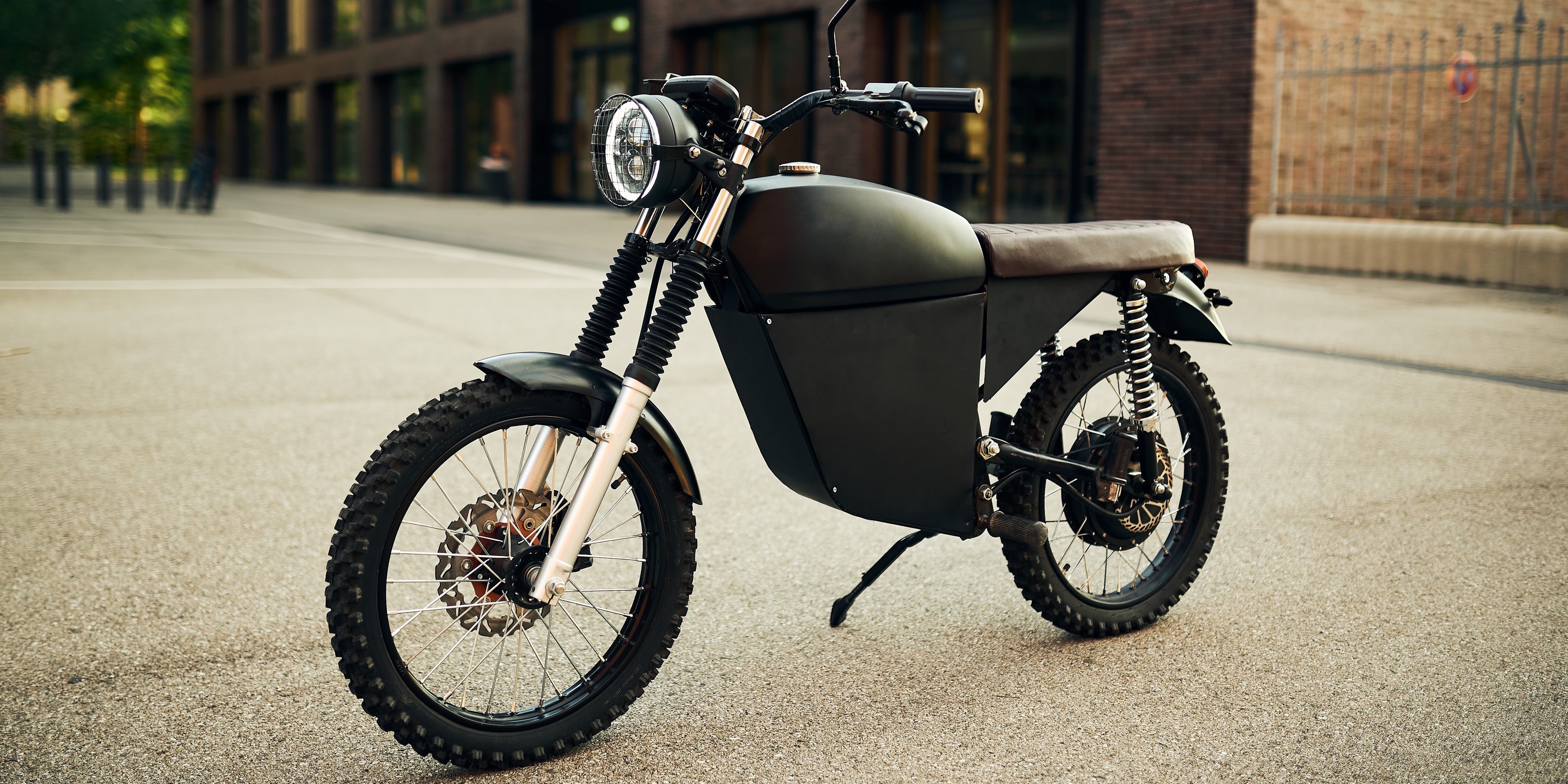 I hear the same thing over and over, all the time: “I’d like to get an electric motorbike, but they just cost so much more than gas motorbikes.” Well not anymore! Or at least not in the case of the BlackTea Moped, which is an urban electric motorbike that is priced on par with gas bike rivals.

First of all, what is the BlackTea Moped?

It was developed by a startup out of Munich, Germany, and it embodies the classic spirit and design of a 70’s Scrambler motorcycle.

But instead of spewing hydrocarbon exhaust, it spews electrons instead. (Or more accurately, cycles electrons rapidly through a motor/controller/battery loop, but that doesn’t sound nearly as cool.)

The electric moped isn’t really an electric moped as it lacks functional pedals, instead opting for motorbike foot pegs. But with a top speed of 50 mph (80 km/h), it falls closer in line with moped speeds.

That means you won’t be taking it out on the highway, but it would make a potent urban assault vehicle. It even has a long bench seat and passenger foot pegs so you can carry a pillion on back.

The BlackTea Moped is powered by a 3 kW continuous and 5 kW peak rear hub motor that looks awfully similar to the one found on the back of the uber-popular ONYX RCR electric moped produced in California.

A 72V and 24.5Ah battery gets stored in the body. BlackTea claims that the battery’s 1.76 kWh of capacity is good for 43 miles (70 km) of range at mixed city speeds averaging 28 mph (45 km/h). But there is room to add a second battery (which BlackTea will happily sell you) and double that range.

For those wondering how accurate the range rating is, I can tell you that it is likely only a tiny bit optimistic. I rode a CSC City Slicker electric motorcycle for about a year, and got around 35 miles (56 km) of range with a similar-sized battery and motor. Obviously different bikes and components perform differently, but I imagine that the BlackTea Moped’s range rating is close to accurate.

The BlackTea Moped also comes with a VIN so it can be registered in the US and EU. It ships with a 45 km/h (28 mph) speed limit, allowing it to be registered as an L1e-b vehicle (no motorcycle license required) in the EU or as a moped or “motor-driven cycle” in much of the US. But the speed limit can be removed for “private land use” or potentially for registering it as a true motorcycle. You’ll almost certainly need a motorcycle license to ride it in the US with the speed limit removed, though laws vary from state to state.

The only downside is that the pre-order is an Indiegogo campaign, so you’re taking a significant risk on whether the bike ever gets produced and delivered. More on that below.

I love almost everything about this bike. The design doesn’t blow me away but its pretty nice. It doesn’t take any big risks and the battery box isn’t incredibly imaginative, but it’s classy and I like it. Not every motorbike needs to be over the top. Modesty is a virtue.

The BlackTea Moped is designed to compete with 50cc gas bikes, according to its manufacturer, but I think it could compete up a weight class or two.

My sister rides a CSC San Gabriel 250cc, nothing fancy. It’s a cute little $2,400 bike, if you’re into gas bikes. I’ll admit that even though I much prefer electric motorcycles, I’ve been known to borrow hers for a joyride every now and again. It tops out at 60 mph on the dash, but I think its closer to 55 mph in real life. That means the BlackTea Moped can hit nearly the same top speed and at nearly the same price. All without ever having to deal with adjusting a choke or tuning the carb to keep the idle where you want it.

Yes, there’s definitely a lot of risk with backing an Indiegogo project like this. But the company’s timeline gives me confidence. They don’t expect to deliver the bike until Spring of 2021. That’s both a bummer and a plus. It sucks to wait that long, but it also shows that they are professional enough to understand how long production and certification takes, and aren’t giving unrealistic delivery dates that they know will need to be pushed back.

Guys, I’m seriously debating backing this project and pre-ordering a Black Tea Moped. Somebody better talk me out of this before I spend too much time crafting a pitch to my wife on why this is a “good investment”.

[Update: Ok I bought one. I’ll just tell my wife about it later.]