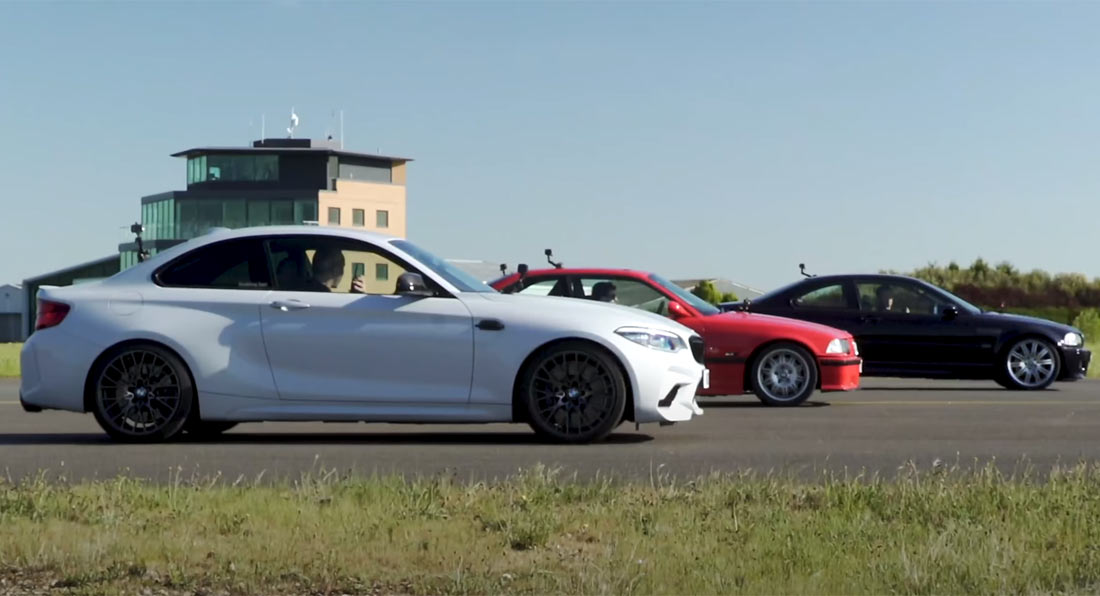 
The results of lining up a BMW E36 M3, E46 M3, and an M2 Competition are pretty obvious but that doesn’t make this video from CarWow any less enjoyable to watch.

The German car manufacturer has built some truly remarkable vehicles over the decades and these three are among the most beloved. Not only do they offer very impressive performance, but they have eye-catching looks and each have a strong following among enthusiasts.

Read Also: BMW M2 Competition In Frozen Sunset Orange Is One Of Just Two In The World

By comparison, the E46 M3 only ever left the factory with a 3.2-liter six-cylinder rated at 338 hp and 269 lb-ft (365 Nm) of torque. Those are respectable figures but pale in comparison to the M2 Competition that features a 3.0-liter twin-turbocharged straight-six delivering 405 hp and 406 lb-ft (550 Nm) of torque.

The first race is very interesting. Much to our surprise, the E46 and E36 jump out to an early lead over the M2 Competition as the more powerful car struggles for grip off the line. For roughly half of the drag race, it was a two-way fight between the E36 and E46 but the driver of the E46 accidentally changed into fifth gear instead of third, relinquishing the lead. By that time, the M2 was closing fast and passed both M3s. The results of the other drag races are very similar.

Refreshed Genesis G70 gets drift mode among powertrain tweaks
Rich Rebuilds? Sort Of: Rich Converts A Mini Into An EV
Detroit is on the ropes in Asia
Dearborn Fire Crews Cut Up A Ford Mustang Shelby GT500 For Training
2021 Audi E-Tron