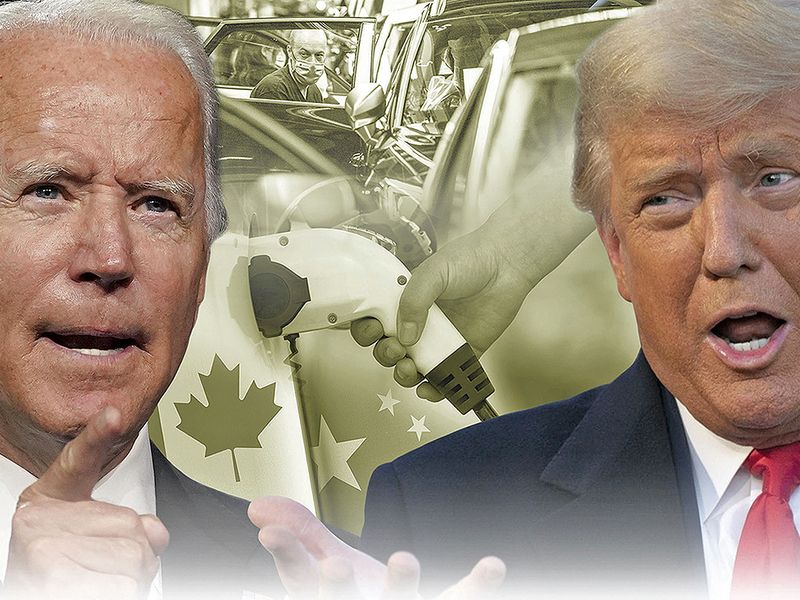 In an unpredictable year upended by the coronavirus pandemic and the resulting recession, next week’s presidential election should answer at least one question: Who will shape the nation’s policy affecting the auto industry over the next four years?

Incumbent Donald Trump and challenger Joe Biden, though starkly different in campaign rhetoric and approach, do converge on some key issues: Both support the changes negotiated in the United States-Mexico-Canada Agreement, promote efforts to strengthen American manufacturing and bring back jobs, and say they’ll take a harder line on China.

Where they may differ is on trade and the environment.

A Biden presidency might encourage a new wave of transportation propped up by federal investments in EVs, infrastructure and other forward-looking technologies. He might also remove some tariffs and work with allies to solve trade issues.

But until the coronavirus is contained, neither Trump nor Biden will be able to steer the economy, or auto policy. “That is job one,” said Kristin Dziczek, of the Center for Automotive Research in Ann Arbor, Mich. “Get COVID-19 under control.”

Trump’s loosening in March of vehicle fuel-efficiency standards put in place under predecessor Barack Obama set the stage for a legal battle over the new rules. But an administration under Biden — Obama’s vice president — would likely look to toughen U.S. standards and bring them more in line with global standards.

Regulations on fuel economy and greenhouse gas emissions are the “most notable” differences between the two campaigns, said Jackie Glassman, a partner at law firm King & Spalding, who was NHTSA’s chief counsel and acting administrator under President George W. Bush.

Under Trump, the administration “will continue with the policies it has already announced,” she said, including the revision of Obama-era auto pollution and fuel economy rules for light vehicles to make improvement targets less aggressive, and the high-stakes legal battle with California officials over the state’s authority to restrict tailpipe emissions.

“It’s very difficult to survive out there if all you’re trying to do is comply with the federal government instead of building your product,” he said.

Several industry experts agreed a Biden administration would probably not continue the lawsuit against California and would be more likely to adopt higher fuel-efficiency standards that would accelerate the adoption of zero-emission vehicles.

“With a Biden administration, they’re going to be a lot more comprehensive and holistic,” said U.S. Rep. Haley Stevens, a Michigan Democrat who was chief of staff to the U.S. Auto Rescue Task Force, the Obama administration team led by Steven Rattner and Ronald Bloom to shepherd Chrysler then General Motors through bankruptcy restructurings in 2009.

“Arguably, the approach of the current administration has led to states trying to take their own approach,” she said. “We need, overall, a strong and aggressive energy plan that brings automotive to the table.”

Tougher regulations on tailpipe emissions could speed the development and adoption of alternative-fuel vehicles, especially electric cars. But the path — and pace — to get there could vary greatly depending on who is president, industry experts say.

“The current debate around the incentive structure, subsidies and regulatory requirements — including at the state level, such as what California is proposing — depending on the outcome could have a profound impact on the investment strategy for automakers and suppliers,” said Gary Silberg, global head of automotive at KPMG.

Global automakers have announced more than $100 billion in investments in new electric vehicles since 2018, he noted. That investment will continue no matter who is president, according to King & Spalding’s Glassman.

“It’s a globally competitive area,” said Glassman. “There may be … some differences in emphasis and differences in approaches, but given the amount of capital investment that’s already been put in that space, I think that will continue regardless of who wins the election.”

Trump, at times, has said he is big fan of EVs. However, his administration did not expand the use of federal tax credits on EVs in 2019, despite lobbying efforts by General Motors and Tesla. The U.S. automakers this year became the only two to no longer benefit from the incentive.

Trump, a staunch advocate of the oil industry, also has led a deregulatory charge and “eliminated unnecessarily burdensome rules that stifled domestic energy production,” the White House said in July.

The current administration has not put out a comprehensive plan or fully concluded that the future of the industry is going to be electric and connected, according to Robbie Diamond, CEO of Securing America’s Future Energy, a Washington nonpartisan group committed to reducing the country’s reliance on oil.

“Ultimately, we’ll have an electric, connected vehicle,” he said. “The question will be how quickly, and will the United States own that industry or hand it to someone else?”

Both men running for president want to see more manufacturing jobs in the U.S., but their approach to trade will likely be very different.

Biden would be more open to multilateral negotiations with partners, some analysts say, while Trump would continue his go-it-alone strategy.

“Those who produce in the U.S. for the U.S. market will fare better under both presidents,” said CAR’s Dziczek.

Analysts say Biden might bring the U.S. into the Comprehensive and Progressive Agreement for Trans-Pacific Partnership, a free-trade pact signed by Canada, Japan, Mexico and Vietnam and seven other countries. The nations crafted the pact after Trump withdrew the U.S. from the original plan to lessen member countries’ dependence on China.

For North America, Trump’s United States-Mexico-Canada Agreement — the replacement for the North American Free Trade Agreement and a major win for the administration — is supported by both candidates as well as industry stakeholders. The pact’s labor provisions and tougher rules of origin, especially for autos, could be a model for future trade agreements.

Trump’s use of tariffs on trading partners, however, has been a “chaos on cost” for automakers and suppliers, Dziczek explained.

A self-described “tariff man,” Trump has made it clear he likes to impose import duties to leverage negotiations with other countries. Michael Stumo, CEO of the bipartisan Coalition for a Prosperous America, said the tariffs protect the U.S. from foreign predation and are an incentive to build here.

Jennifer Safavian, CEO of Autos Drive America, which represents the U.S. operations of international automakers, said “tariffs just increase cost, ultimately to the consumer, and it creates so much uncertainty for the industry.”

In his efforts to negotiate better terms in U.S.-Europe trade, Trump has frequently threatened to levy tariffs on imported vehicles and auto parts from the European Union, though any action has been delayed amid attempts to reach a deal. If Trump is re-elected, Safavian said she expects the threat of Section 232 tariffs on imported autos and auto parts based on national security concerns to remain as well as the possibility of other tariffs.

A Biden presidency might take a close look at existing tariffs and work with allies to remove some and resolve the looming threat of tariffs on autos and auto parts. “I don’t think we would have to be so worried about that under a Biden administration,” she said.

Both Trump and Biden say they’re committed to addressing China’s trade practices, treatment of intellectual property and alleged currency manipulation, with a strong alignment across the campaigns that American manufacturing has suffered because of those matters.

“China is a big issue for a U.S. president — no matter the party,” said Dziczek.

Trump’s tenure has been marked by a two-year trade war with escalating tit-for-tat tariffs, followed by a compromise with Beijing — and a resumption of tensions over matters political and pandemic. But China is not on track to meet the additional $200 billion of U.S. product purchases over the next two years, as outlined in the phase one deal, Dziczek said.

Biden could take an equally tough approach to China, but Michael Stumo, CEO of the bipartisan Coalition for a Prosperous America, argues his strategy of aligning with allies would be “so slow and indecisive that China will overtake us.”

If elected, “the Biden administration will have to resolve the inherent conflict of working with our allies or being tough on China because they won’t be able to do both,” he said.