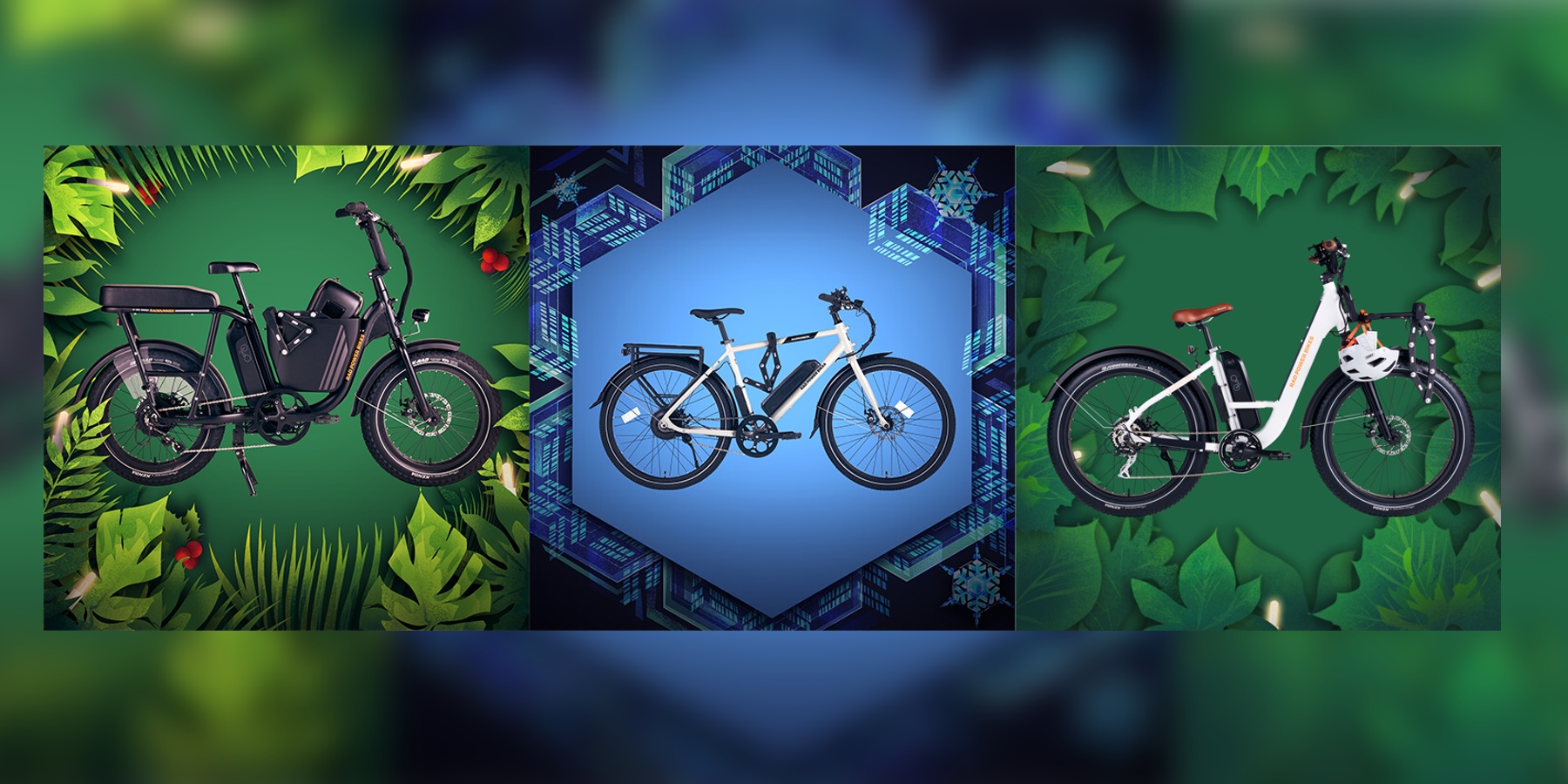 I’ve been riding electric bicycles for over a decade, and electric scooters for the better part of that decade. Nothing has proven to be a better form of quick, reliable, and inexpensive personal transportation. And thanks to this year’s Black Friday sales, now these awesome little commuter vehicles are getting even cheaper!

Down below are all of the best deals we’re seeing today on electric bicycles and electric scooters.

They have everything from simple single-speed commuter e-bikes to cargo-hauling utility e-bikes and even big fat tire e-bikes for hitting the trails. Their bikes reach speeds of 20 mph and have ranges of up to 45 miles.

And now some of their most popular models are on sale with accessory bundles for up to $250 off!

Don’t dawdle though, this sale won’t be around forever!

Juiced Bikes makes some of the coolest e-bikes I’ve tested, with their Scorpion line near the top of the list.

All of their e-bikes feature some level of discount, but the best deal is on their HyperScorpion which is marked down by $800 to just $2,199! That’s a 32 mph e-bike with over 1,500 watts of power and an awesome moped frame featuring full suspension. It’s basically a mini-motorcycle that you charge up as easily as a cell phone.

Their standard Scorpion, which still gets up to around 25 mph and is an awesome ride in its own right, is marked down $500 to $1,499 – another awesome deal.

And you can even take an extra $100 off any e-bike by using the code HOLIDAY.

Ride1Up has a number of interesting and value-packed e-bikes on sale this year. The company is known for making e-bikes with higher quality components yet at lower prices than the competition, making them a great option for bang-for-your-buck e-bikes.

They have models with top speeds ranging from 15 mph to 28 mph. And best of all, they have an awesome e-bike that starts below $1,000!

The Lectric XP e-bike from Lectric Bikes is an insanely good deal any day of the year, at just $899.

But for Black Friday, the company has released an accessory bundle. For the same price of $899, you’ll get almost $300 in free accessories, including a much nicer seat, a suspension seat post and pannier bag.

The upgrades turn the classic Lectric XP into a more comfortable and higher utility e-bike.

Aventon has incredibly well-built electric bicycles at prices that defy logic. With this level of build quality, I just don’t understand how they can charge so little.

But hey, I’m not complaining – and neither should you! Especially since you can now take an additional $100 off two of Aventon’s most popular e-bikes today, the Aventon Level and Aventon Sinch.

The former is a commuter e-bike while the later is a folding fat tire e-bike. I’ve reviewed them both and they’re both incredibly well made and incredibly good rides.

Check out their sale page here, where the already good prices are even better.

Miami-based FluidFreeRide has nearly every scooter in their lineup discounted this year.

The company has a great reputation for service and support, and as an added bonus they have partnered with Trees for the Future to plant 100 trees for every Black Friday Deal they sell this year.

Toronto-based Apollo Scooters has a number of electric scooters on sale this year. The company ships across the US (for free!) and has 10 US-based servicing locations, plus you don’t get charged sales tax since they’re a Canadian company. That’s pretty cool.

You can see their entire breakdown of sales for every scooter model they offer, ranging from $100 to $500 off. You also get free accessories if you buy two scooters, so make sure you find a riding partner this year!

I recently reviewed Urban Machina’s EVOLV Tour 2.0 electric scooter and found it to be an awesome scooter for city riding.

It features speeds of up to 28 mph and a range of up to 25 miles. There’s even full suspension to keep the ride nice and smooth even when your streets are anything but smooth.

You can take nearly $100 off the price of the scooter (around US $1,500 when converted from the Canadian price of $1,499 CAD) by using the code KILLLERDEAL. In fact, that code works on all of their scooters right now, so check out their whole lineup!

Blix makes mostly Dutch style electric bicycles that have a flair for elegance.

Unlike the bulky, industrial design we see on many electric bicycles, Blix’s e-bikes have a more refined and European style to them that many people find refreshing.

I’ve reviewed some of their models, including the Aveny and Vika+, and found them to perform as nicely as they look.

Moving from a Dutch-style e-bike company to an actually Dutch e-bike company, VanMoof is headquartered in the Netherlands and builds high-tech commuter e-bikes.

They just launched a new line of e-bikes recently, and so they are now offering their previous generation bikes for sale on Black Friday at up to 70% off, which is a pretty crazy deal.

You probably know Bird from their shared electric scooters found in cities all over the world.

But did you know that they actually sell their own personal electric scooters as well? If you don’t want to share your Bird, you can buy a brand new one that is always there when you need it.

And if that’s still too rich for your blood, the Bird Air Silver is priced even lower at $499, marked down from $599.

And that’s it for now. Let us know in the comment section below if there are any good e-bike or e-scooter deals that we’ve missed!