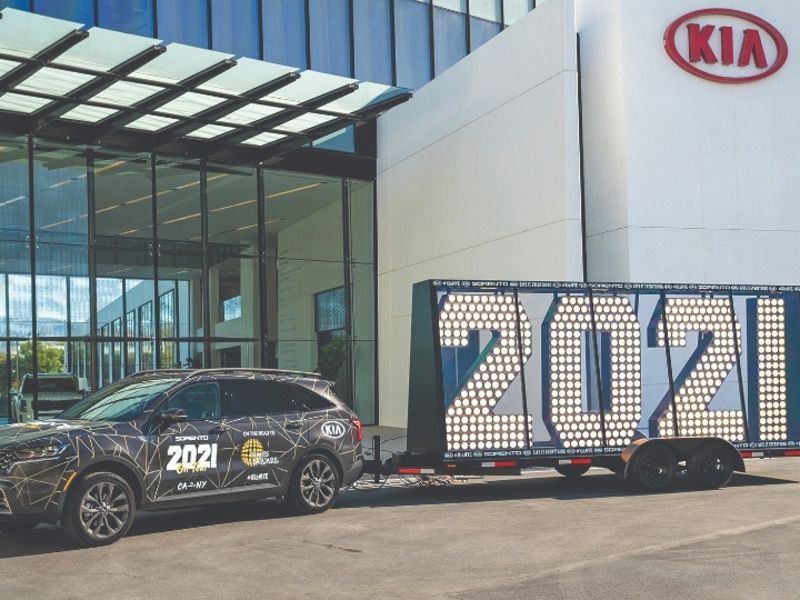 The new year won’t magically wipe away the coronavirus or erase the political strife of 2020. But the mere changing of a numeral on the calendar at least brings hope that the next 12 months will be different, and Kia Motors America is seizing on the rare moment of optimism in otherwise dark times.

The effort includes using a redesigned 2021 Sorento to haul the “2021” New Year’s Eve numerals from the brand’s U.S. headquarters in Irvine, Calif., to New York City, where they will be installed at the top of One Times Square.

The Sorento will make stops at dealerships along the way, with the goal of luring some local media coverage. And the brand will try to make a national splash with TV ads running during ABC’s “Dick Clark’s New Year’s Rockin’ Eve with Ryan Seacrest 2021.” The deal with ABC includes an in-show integration that will spotlight the Sorento road trip using footage of national landmarks, produced in partnership with National Geographic.

There will be plenty of product placement on Times Square, including Kia vehicles parked throughout and signage on platforms and video screens.

Kia will also host front-line workers and their families in Times Square.

“You won’t be able to miss during the ball drop that Kia is a part of it,” said Russell Wager, director of marketing operations for Kia Motors America.

Of course, the in-person ad exposure will pale compared with normal years. The Times Square Alliance, the group that stages the ball drop, has closed the festivities to the general public due to the pandemic and instead will run a virtual event that includes a 6½-hour commercial-free webcast featuring performances that the alliance has not yet publicized.