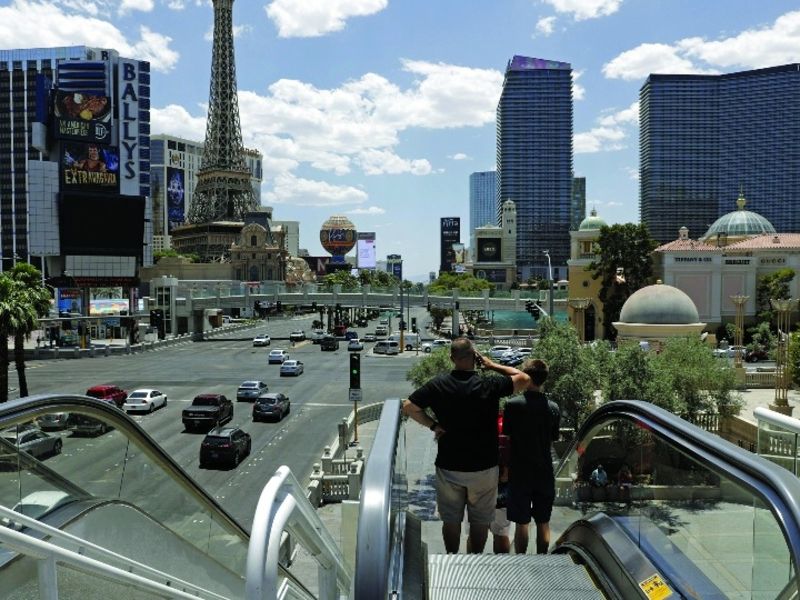 Watching a glimpse of the Bell Nexus flying-taxi concept remains a prominent CES memory, but not for reasons you might expect.

With its six tilting fans, the vertical-takeoff-and-landing craft was an undeniable showstopper at the 2019 CES. Whether air taxis are a figment of science fiction or a viable mode of travel, for a moment, was beside the point. The Nexus was an ambitious, full-size sculpture representing tomorrow’s transportation.

Moments later, I stood in a nearly two-hour line waiting to board the Las Vegas Monorail for a ride back toward the Strip.

Even though there’s no in-person CES this year, I’ve reflected a lot on that particular experience. Along with the hum of the casinos, anyone who has attended CES knows that navigating transportation systems strained beyond capacity has always been an essential part of the show.

Standing in line for the monorail — rescued, incidentally, from bankruptcy in recent weeks — it should have been a no-brainer and would have been faster to walk the approximate two miles to The Linq. While not impossible, that would involve utilizing an infrastructure seemingly designed to deter pedestrians.

That was a point driven across — no pun intended — during another visit to the southern end of Las Vegas.

Crossing Tropicana Avenue to get to the MGM should have been a simple walk across the street. But Jersey barriers separating the eastbound and westbound lanes made that impossible.

Instead, I took the only available route: riding an escalator up to an elevated pedestrian walkway, which took me westbound, northbound through the New York, New York casino and finally back east into the MGM. Up … three blocks and a casino … then down. Instead of a straight-line walk across the street.

Such a roundabout route seemed like the ultimate pedestrian irritation.

Erin Breen, director of the University of Las Vegas’ Vulnerable Road Users Project, said the intention is the opposite and that my consternation is misplaced.

“I don’t know anyone who does it better,” she said. “We’ve gone to great expense to have pedestrians not cross at grade. Those crazy pedestrian bridges move between 90,000 and 105,000 people every day. And while as a pedestrian advocate I’d typically say ‘inconvenience the driver,’ that’s a large number of people and it can become impossible for traffic to move. The most interesting thing to me is that you can cross every one of those in less than five minutes.”

As an international tourist destination, Las Vegas formed public-private partnerships with casinos and other stakeholders to pay for the above-grade pedestrian walkways to ensure tourists remain separated from the multilane, car-dominated landscape below.

“The overhead walkways have been incredibly helpful for pedestrians not losing their lives in Las Vegas,” Breen said. Less than 10 percent of the city’s pedestrian fatalities are tourists, she says. Las Vegas has made investments to protect tourists around the Strip, but residents of the city too often fall victim to some of the familiar infrastructure dangers found throughout the Southwest — multiple lanes laid out on long, flat roads.

Overall, Nevada ranks 11th in the U.S. on the Pedestrian Danger Index published by Smart Growth America in its annual Dangerous By Design report. Seventy-seven pedestrians died in Las Vegas alone in 2018, a high mark that dropped to 52 in 2019 and 51 in preliminary 2020 data.

One of the city’s efforts to reduce deaths has been to partner with Derq, a tech company that deploys software on existing infrastructure and uses cameras and radar to analyze the movement of vehicles and other road users. It can issue warnings in real time via vehicle-to-everything connections, and it can analyze near misses and provide city leaders with insight on trouble spots before collisions occur.

If placing pedestrians above grade is part of the solution, the big transportation project taking place below grade in Las Vegas is a significant development that could ease woes around the convention center. Elon Musk’s Boring Co. has made the city in general and the convention center in particular the epicenter of its tunnel-based people mover. It was supposed to open during this year’s CES, which is now virtual only. An opening date remains unclear, but ambitions are growing. As part of the Las Vegas Convention and Visitor Authority’s purchase of the bankrupt monorail system, a noncompete agreement between the monorail and Boring Co. was dissolved. Plans have been sketched to expand the Boring Co.’s network to the Strip.

Checking out the transportation provided by Boring promises to be an anticipated moment of the 2022 CES, if an in-person event is held.

With the Boring Co., Derq, the promise of air taxis and the realities of wide streets, Las Vegas has become the most interesting place in the country to see transportation’s present and future.

You may email Pete Bigelow at [email protected]

Mobility initiatives in Las Vegas show promise in improving transportation options in a city where present challenges stand in sharp contrast to concepts for the future showcased during CES.