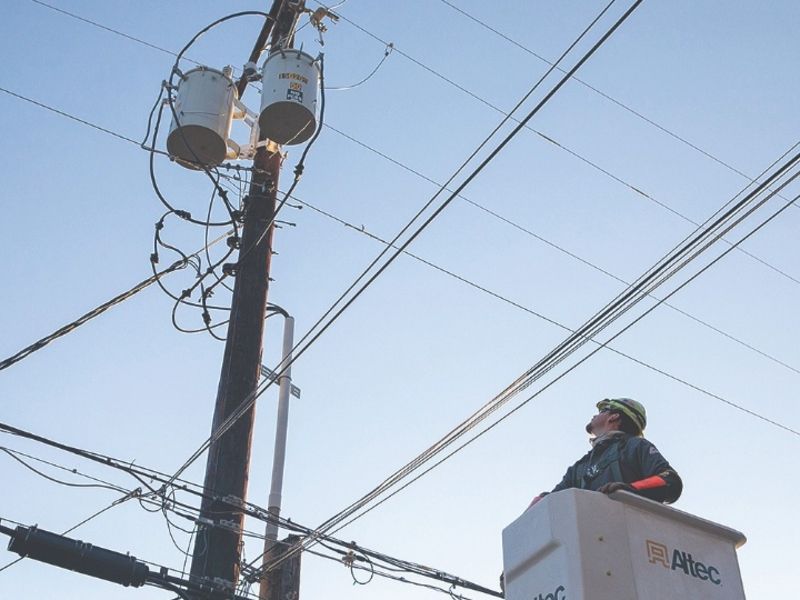 Power crises such as the one in Texas last month and last year’s blackouts in California raise questions about the fragility of power grids — and about how big an impact electric vehicles could potentially have on them.

But while EVs undoubtedly increase the load on the power infrastructure, they can also help bolster it through vehicle-to-grid technology. And their impact on the grid can be reduced through smarter charging.

The magnitude of the states’ power failures demonstrates the need for better grid preparedness. It also shows the importance of optimizing the grid’s capacity for the upcoming influx of EVs on the roads — and points to the role that EVs could have in mitigating similar outages in the future.

EVs “are either going to be a very bad thing during a crisis or a very good thing,” said David Slutzky, CEO of Fermata Energy, a company that supplies bidirectional charging equipment that can transfer energy stored in an EV battery back to the power grid.

“If the government and the auto industry continue to pursue electrification of vehicles and we have many, many more EVs on the roads of Texas and everywhere else, and we have an event like happened in Texas, then the vehicles could be a disaster for the grid,” said Slutzky. “That’s the worst thing that you can do: Add lots of load and then have these events that happen.”

But finding ways to reduce load at peak energy-usage times and transfer energy back to the grid could be a saving grace.

“If instead of just adding load, you add a combination of some load and lots of storage from the parked cars, now you’re adding stability, more cost-effectively,” he said.

As EVs gain popularity, the industry, policymakers and utility companies are bracing for the accompanying increased power consumption needed for charging.

“In general, electricity consumption in the U.S. is going up, and so EVs will accelerate that trend pretty drastically because when they do charge, they need a lot of energy,” Alisyn Malek, executive director of the nonprofit think tank Commission on the Future of Mobility, said on a February episode of Automotive News‘ Shift podcast.

She called the crisis in Texas “a really good reminder, bigger than EVs, that we need to rethink our grid and make it more responsive.”

But even with this potential increase in demand, much can be done to manage and optimize when and how EVs are charged — while still taking grid capacity into consideration, said Britta Gross, managing director of the carbon-free mobility global program at the Rocky Mountain Institute, a clean-energy nonprofit.

For instance, smart charging during periods of lower loads rather than peak times can be key to the success of both EVs and the grid.

“EVs are the biggest, smartest and most flexible load coming to the grid,” Gross said. “EVs can fill in these opportunities and make better use of all of our generating capacity on the grid because they can be programmed to charge exactly when it is right for the grid. That’s a way to actually depress all of the rates because we’re making much more efficient use of generating aspects today.

“This idea of not leveraging these major, major assets doesn’t make sense anymore.”

As for bidirectional charging, many automakers have begun integrating such capabilities into their vehicles. They include automakers from Nissan to Mitsubishi to EV startup Lucid Motors. The Leaf, for instance, has long been bidirectional and has been used in crises to help stabilize the grid.

On a technological level, it’s relatively simple, Slutzky said. Vehicles may require minor software updates to allow for bidirectional charging, and they must use properly equipped chargers, he said.

“There are many bidirectionally capable vehicles already on the roads that could be retroactively enabled,” Slutzky said.

“The real issue is that the OEMs have to decide that they’re comfortable with it,” he added. “In fact, every car already discharges. That’s how it provides energy for the vehicle to move. It’s an issue of, do they want to allow the batteries to be dispatched into the grid or into a building load or not?”
Once automakers decide to allow this capability, there are plenty of possibilities.

“Most cars are parked at any given time, which means there’s more available storage to support the extra load than is needed,” Slutzky said. “It gets to be an interesting ecosystem where you have a more stable grid, you have a more resilient grid, individuals have their own access to resilience, backup power, and the utilities will pay for access to that storage, which makes the EVs more cost-effective.

“We’re at that moment where we need to stop and think about this and make a slight pivot in the direction of bidirectionality, because if we don’t, we’re going to create problems,” he added. “If we do, we’re going to solve problems.”